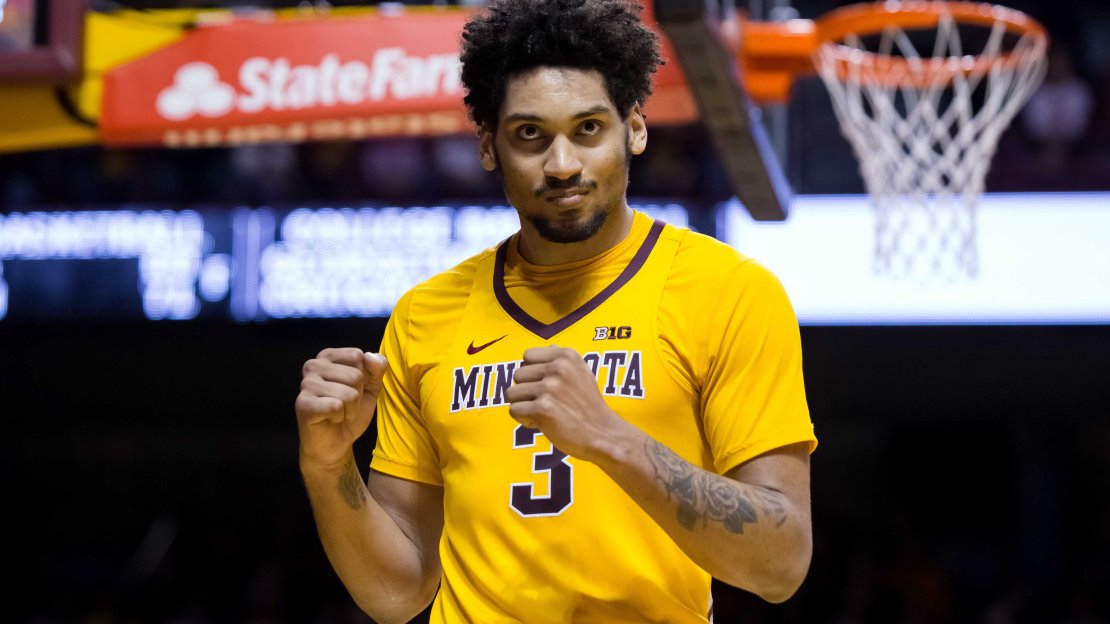 No Big Ten team has been more of a surprise than Minnesota. And a key player in the Golden Gophers? rise has been Jordan Murphy.

The 6-6, 240-pound sophomore forward continues to build on a strong debut last year, when he averaged 11.6 points and 8.0 rebounds. This season, the San Antonio native is averaging 10.7 points and 8.5 rebounds, as the Gophers already have 20 victories (20-7 overall; 8-6 Big Ten) a season after notching just eight. It has been an impressive rise and the biggest single-season win improvement in school annals, as Minnesota is looking like an NCAA tourney team for the first time since 2013, when Tubby Smith was coach.

Murphy is on a roll of late, notching a double-double in each of the Gophers? last four games for a team that has won five in a row after a five-game losing skid. He is averaging 18 points, 15 rebounds and 1.3 blocks while shooting 62 percent the last four games.

Murphy was at his best in a double OT win vs. Iowa on Feb. 8, when he tallied 25 points and 19 rebounds. He is coming off a 16-point, 15-rebound effort in an OT victory vs. Michigan on Sunday. I caught up with Murphy as he prepped for a game at Maryland on Wednesday vs. a Terp squad that won in Williams Arena earlier this season, 85-78, and is coming off a defeat at Wisconsin.

Q: What have been key to ripping off five wins in a row?
A: We are just staying focused for the most part. Even when we lost five in a row right before this streak, we just told our guys to stay confident and composed and that we would go on a run eventually.

Q: What doubts were going through your head when Minnesota was losing five games in succession?
A: I don?t think we had doubts. It just felt weird going through that after having so much success earlier in the season. We were just confused as to what was going on and we knew we had to get back to work and to get in the gym extra. We started to do that, and you can see the dividends that are paying out.

Q: Last year, Minnesota won eight games. This year, you guys already have 20 wins. What?s the difference?
A: We have a different mind-set and we pay attention to the little things more, focus on the scouting report and game plan. Things like loose balls matter more, rebounding and playing way better defense. Those things have been key.

Q: Maryland is up next. What do you think of the Terrapins, who beat you guys earlier this season in Williams Arena?
A: A very talented team. It is a young, quick team. Melo Trimble is terrific. They have a lot of good freshmen. They will keep us on our toes.

Q: You are a big fan of horror movies. What is your favorite?
A: I think the very first ?Insidious? is my favorite scary movie.

Q: What is it you like about scary movies?
A: The thrill they give you. Whenever there is a scary scene, it?s one of those things that gives you a big jolt and gets your blood pumping.

Q: Who would win a slam-dunk contest among your teammates?
A: I think me or Eric Curry. Eric is really athletic. I may have to give him the edge. He has some creative stuff in his dunk package.

Q: What is your favorite dunk?
A: I don?t know what my best dunk is. I never have tried to go out of my way and practice dunks. Me and Eric practice some and try to go through our legs and do windmills.

Q: Who is your favorite non-Gopher player?
A: Johnathan Motley from Baylor is really good. In the NBA, I?d say Kawhi Leonard and Paul George. I?m a big Spurs fan, my hometown team.

Q: You hail from San Antonio. What was your first big shock that you weren?t in Texas anymore?
A: When I first saw the snow I said, ?this is not home.? It was crazy. There was so much snow everywhere. It was an insane moment.

Q: Do any teammates wear cologne during games?
A: I?m not too sure. I don?t think any do. I know we all wear deodorant. We don?t want to stink.

Q: If you could take one teammate home to your parent?s house for dinner, who would it be?
A: That?s a hard one. I would take all of them. I would want my parents to see what all of them are like.

Q: Who is the best shooter on the team?
A: We have some shooters on this team. I would go with Nate (Mason) or Brady Rudrud, a walk-on. Those two can really shoot it.

Q: What teammate wouldn?t you want to get into a fight with?
A: Probably Ahmad Gilbert. That is one tough dude.

Q: What?s it like to play in ?The Barn? among all of those students dressed in animal costumes?
A: I think it?s great. The outfits bring great enthusiasm to the games. There are student sections all over, but I?ve never seen anything like it. It?s pretty unique with all of the animals. It?s pretty cool.

Q: If you came to a game at Williams Arena as a fan, what costume would you wear?
A: I would probably come dressed as a cow. I think the cow costumes are the best ones because of the patterns. I just like them best.