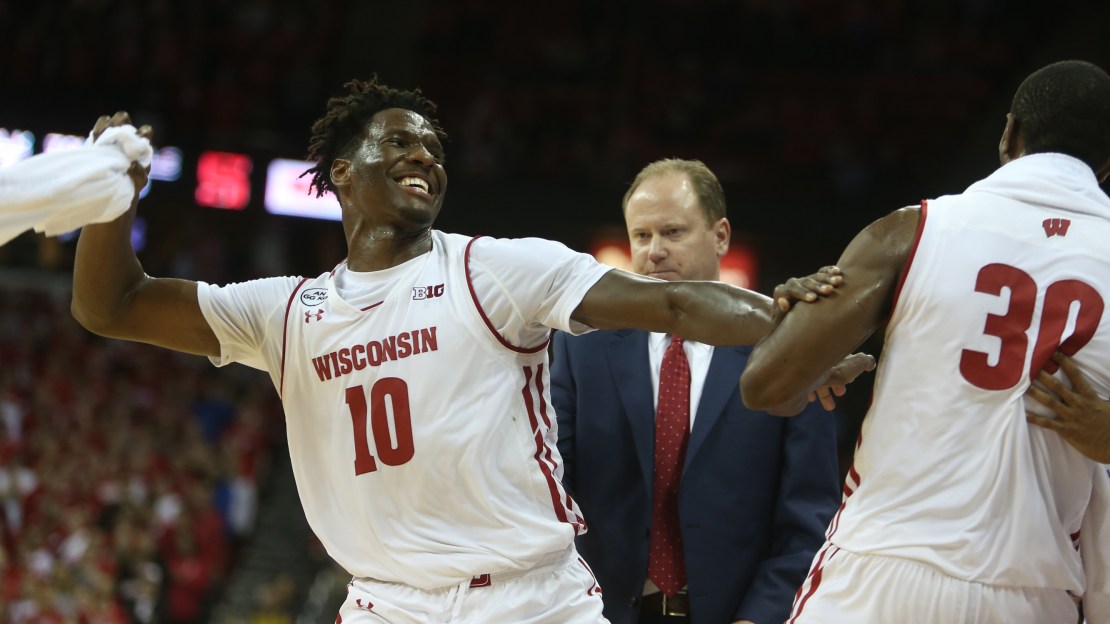 Nigel Hayes knew Wisconsin wasn?t playing well leading into last Sunday?s home game vs. Northwestern. He knew his Badgers were poised for a slip-up. And, sure enough, it happened: Wisconsin lost, ending an eight-game winning streak and trimming the Badgers? first-place lead over Purdue and Maryland to one game.

But there is plenty of basketball left to be played this season. And Hayes is focused on leading the Badgers to their fifth Big Ten championship since 2002. The 6-8, 240-pound senior is second on the team in scoring, averaging 13.6 points. He also pulls down 5.9 rebounds with 2.9 assists for Wisconsin (21-4 overall; 10-2 Big Ten).

Hayes and the Badgers will try to get back on track on Thursday when they visit Michigan, which has won two in a row in a push for an NCAA bid.

I talked to Hayes as he prepped for the Wolverines.

Q: How do you regroup from that stunning home loss to Northwestern on Sunday?
A: Sometimes it takes losing for people to really understand and believe what the team and coaching staff are saying. We have been making the same mistakes before this loss. We had been winning but we didn?t feel like we had been performing like we should. We can?t keep doing this, especially as the opponents keep getting better. It finally caught up to us.

Q: What has the team been missing?
A: We had been harping and preaching the same things. Our turnover rate, always trying to control that. We can do a better job of playing more efficiently. We haven?t been the prettiest team offensively to watch. We usually have gotten it done with our defense. Against Northwestern, we were so-so on offense and defense. You take care of turnovers, playing more efficiently offensively, rebound better and get transition points ? we can turn from an average team to a good team.

Q: Have you been happy with how your senior season has been going?
A: I think it has been pretty good. We have four losses this year, lots of wins. I?m not a selfish person, so I don?t harp on individual statistics. I think I have done a good job making the sacrifices of my stats for the betterment of my team. I do things that don?t always show up in the stat books. I try to be a leader, help the team ? We are still in first in the Big Ten and control our own destiny.

Q: What did you think when Wisconsin wasn?t included among the Top 16 teams in a bracket revealed by the NCAA selection committee last weekend?
A: It?s just a TV media ploy to generate interest and money. And they hope they can get a player or coach to say something ridiculous or emotional about it so they can generate a story out of it. We don?t pay attention to it. There is plenty of basketball left. With the parity of college basketball this year, anything can happen. It is nothing to get caught up on. We have a lot of games left before we even worry about the NCAA tourney.

Q: You have been vocal about athletes being paid. Do you think that day is coming?
A: I think it will – slowly but surely – but not in my time. I think it?s something that will make its way around. It?s difficult to figure out how to compensate players. We know the money is out there. And it?s only growing with the TV contracts you see. And you see some of these top football programs hirer someone for a miscellaneous position and give him hundreds of thousands of dollars. Coaches are making millions of dollars. And the players are still where they are. I think the time is coming. There is no deadline I can tell you. But I think things are headed that direction.

Q: When you get a chance to go out to eat in Madison, where do you like to go?
A: I really enjoy Brickhouse BBQ. Ian?s Pizza is a good place, too. Sometimes I order Wings Over Madison. Those are usually the go-to choices. I am a fake-healthy eater. Sometimes I will jump into a phase when I only eat salads, fruits. The last few weeks, I didn?t eat meat at all. And after we lost, I ate my feelings and had some binge eating on food and cookies. It just depends. I try to eat well for the most part, take care of my body. Eat to live. But I have days when I need my comfort food.

Q: If you had to take one teammate to a back-alley brawl with you, who would you take?
A: One teammate ? uh, Khalil (Iverson) or Charlie (Thomas). Those are just my guys. If I needed anything, Khalil probably would be one of the first guys to come assist me.

Q: Could anyone on the team beat Bronson Koenig in a 3-point shooting contest?
A: Brevin Pritzl is the best shooter in the country. He is just scared to shoot the ball. I hope he sees this. I?m challenging my teammate publicly. I hope people see this on Twitter and people tell him what his teammate said about him. We have the utmost confidence in Brevin. He just needs to have it in himself. And he has it some days. He usually has it in practice. But when it comes to games, where does it go? He has unlimited range. He can shoot from half-court and it looks like free throws. He is unequivocally the best shooter on the team when he wants to be. I have seen him shoot 100 shots in a row in practice and hit 90 of them.

Q: You play Michigan next. What do you think of the Wolverines?
A: We know they are a good team. Our motto is the Big Ten may not be as glamorous as it has been, but we don?t really have any bad teams. You see the parity. Michigan is turning that corner. They are starting to find their stride, which is what teams want to do this time of the year. Start clicking. Unfortunately for us, we have unclicked. Hopefully, we can turn that around this week. The last few teams that have walked into their arena haven?t left too happy.

Q: I have to ask: You are a native of Toledo, Ohio. Do you own any Toledo Mud Hens gear?
A: I don?t have one article of clothing of the Mud Hens. No. I don?t.

Q: Disappointing.
A: I know.