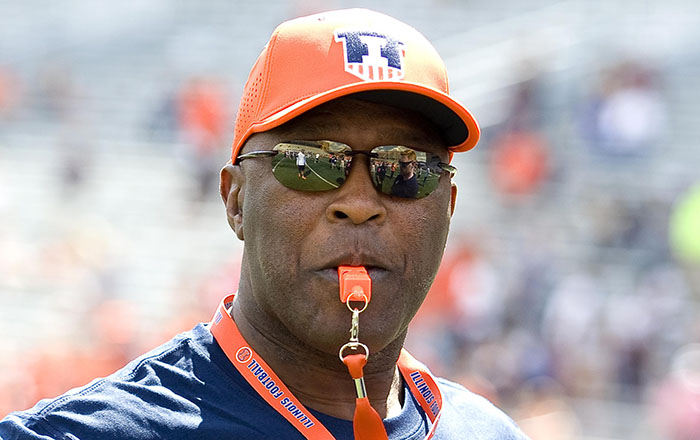 Illinois is in search of stability, and Lovie Smith may be moving closer to that desired goal as he enters his second season in Champaign. The former Super Bowl coach experienced a debut that had its share of ups and downs en route to a 3-9 finish (2-7 Big Ten).

Still, progress was made in Year One. Better days appear to loom ahead, but much work is needed to be done on both sides of the ball for a squad whose offense was No. 13 in the Big Ten in scoring (19.7 ppg) and defense was No. 12 in scoring (31.9 ppg).

Roster numbers are down, so getting too much accomplished overall this spring will be a challenge especially at the quarterback spot, which is a big concern as Wes Lunt is gone. Junior Chayce Crouch may have a bead on the job, but he will be limited in the spring. Crouch had shoulder surgery and is throwing now. The guy who has everyone jacked-up in Chambana is Dwayne Lawson, a 6-6, 220-pound dual-threat from a JC who signed with Virginia Tech coming out of high school in 2015. But he still has to graduate JC and won?t arrive until the summer at the earliest. Lawson will have three years to use two years of eligibility. True freshman Cameron Thomas arrives later, too. So, this spring, it will pretty much just be a limited Crouch, sophomore Jeff George, Jr. and walk-ons. It's an understatement to say QB is a massive worry for Illinois. Stay tuned.

Some clarity may come at other areas. Here are the top three positions of concern.

1. Defensive end. This is a huge concern. Illinois needs to find some pass rushers. The defense lost star ends Dawuane Smoot, Carroll Phillips and Gimel President. Who will bring the heat off the edge? Henry McGrew is the only end who played the position at all last year, and he saw minimal action. James Crawford, who was a reserve linebacker last year, will probably be tried as a rush end this spring. Otherwise, it?s early enrollee freshman Owen Carney Jr. and then the other handful of freshmen who won?t arrive until summer competing for time (Olalere Oladipo, Bobby Roundtree, Deon Pate, Jamal Woods). There also is some concern at DT with Rob Bain and Chunky Clements gone. But Illinois may be OK with Jamal Milan, Kenyon Jackson and Tymir Oliver, as all made contributions as freshmen in 2016. In fact, Milan and Jackson were starting late in the year over Clements and Bain.

2. Offensive line. Not a strength in years, Illinois has some experience back with senior Christian DiLauro, junior Nick Allegretti and sophomore Gabe Megginson. The guys to watch are Darta Lee, who saw some time last year as a true freshman, and senior Jordan Fagan. The coaches are high on Lee?s potential. Also will be interesting to see if Allegretti stays at guard or if he?s moved to center with Joe Spencer gone (Allegretti was the backup center last year). If Allegretti stays at guard, Doug Kramer - who redshirted last year as a freshman – would be one to keep an eye on at center.

3. Linebacker. This is a unit that needs to ratchet up things. And it begins with JC LB Del?Shawn Phillips, who is on campus and who needs to impact right now with 2016 leading tackler Hardy Nickerson Jr. gone. In Phillips' final season as a JC player, he recorded 52 tackles, two sacks, three interceptions, and a fumble recovery. He needs to be a bellwether in the middle and looks like a good player. Junior Tre Watson could be an All-Big Ten-caliber player on the weak side. The staff also needs junior Julian Jones to take the next step on the strong side. He is a good athlete who flashed ability in 2016 by making 32 stops. And keep an eye on sophomore Justice Williams.