Big Ten Whiteboard: It's time for Indiana vs. Purdue, Part I 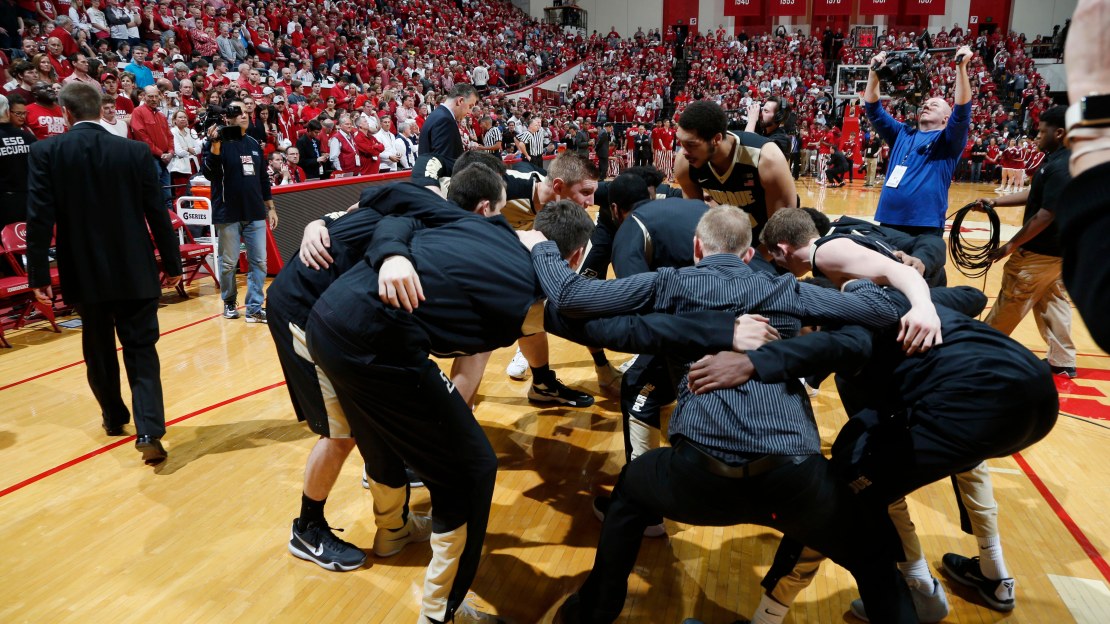 The homestretch is in sight, and Wisconsin is the leader of the pack in the Big Ten-as many envisioned in the preseason. But, there is still a lot of basketball left to be played as we sprint toward the finish line.

Maryland, Purdue and Northwestern remain in the thick of the title chase, while other Big Ten schools look to polish their NCAA resumes.

Here is a look at the week to come in the conference.

Game of the week: Purdue at Indiana, Thursday. Anytime Purdue and Indiana play, it?s a great event-regardless of the records. The fierce rivals clash on Thursday in Bloomington, the first of two February meetings that could have a big impact on the Big Ten race. The Boilermakers are entering the week with lots of mojo, winning five of their last six games and knocking off two ranked foes last week. Indiana? It?s struggling, losing three of its last four with the lone victory being a triple-overtime affair at home vs. Penn State. OG Anunoby is out for the season with a knee injury. And fellow star James Blackmon Jr. has been out with a lower leg injury but may be back for this tilt.

Don?t overlook this game: Northwestern at Wisconsin, Sunday. This could be a doozy. The Wildcats had their six-game winning streak end last week with a loss at Purdue, but star Scottie Lindsey missed the game with the flu. NU opens this week with a visit from Illinois before traveling to Madison. The Badgers are in control of the Big Ten, sitting atop the standings with a 9-1 mark and riding a seven-game winning streak. Maryland is a game off the pace, while Purdue and Northwestern are two back. This is the lone meeting of the season between the Wildcats and Badgers. Too bad.

Must win: Michigan State vs. Iowa, Saturday. The Spartans must topple visiting Iowa, winners of three straight, if they want to remain on track during an up-and-down season. Healthy and playing well, Michigan State enters the week with two wins in a row after a three-game slide. Prior to the Hawkeyes? visit this week, the Spartans must play at rival Michigan, which is desperate to augment its NCAA resume. Will MSU have any letdown for Iowa? The Spartans need to finish strong to ensure a 20th consecutive NCAA bid. The Hawkeyes have postseason hopes, too.

Best individual matchup: Bryant McIntosh vs. Bronson Koenig, Sunday. Some good ones are on tap. But let?s go with the clash of top point guards when Northwestern plays at Wisconsin. McIntosh, a 6-3 junior, averages 13.2 points and a Big Ten-high 5.6 assists. Koenig, a 6-3 senior, averages 14.0 points and 2.2 assists, shooting 39.2 percent from 3-point range.

Upset alert: Nebraska vs. Wisconsin, Thursday The Cornhuskers have shown the ability to take down the big boys. Nebraska opened the Big Ten season 3-0, winning at Indiana, at Maryland and vs. Iowa. And the Huskers also dumped No. 20 Purdue in Lincoln on Jan. 29. The Badgers have been the most consistent team in the Big Ten, losing just one conference game thus far (at Purdue). Yes, there have been some close calls, but Wisconsin typically finds the mettle to grind out wins. It will need to keep doing so to stay atop the league standings and void an upset in Pinnacle Bank Arena.

Big week: Michigan. The Wolverines are a fringe NCAA team that needs to enhance their resume, and they hurt their chances with a damaging home loss to Ohio State on Saturday-Michigan?s second defeat in succession. This team?s wiggle room is shrinking quickly. Michigan can impress the committee this week, beginning with a big home game on Tuesday vs. Michigan State-which beat Michigan last week. Then, the Wolverines go to Indiana on Sunday. Sweeping these two games would be huge for Michigan?s confidence ? and NCAA hopes.