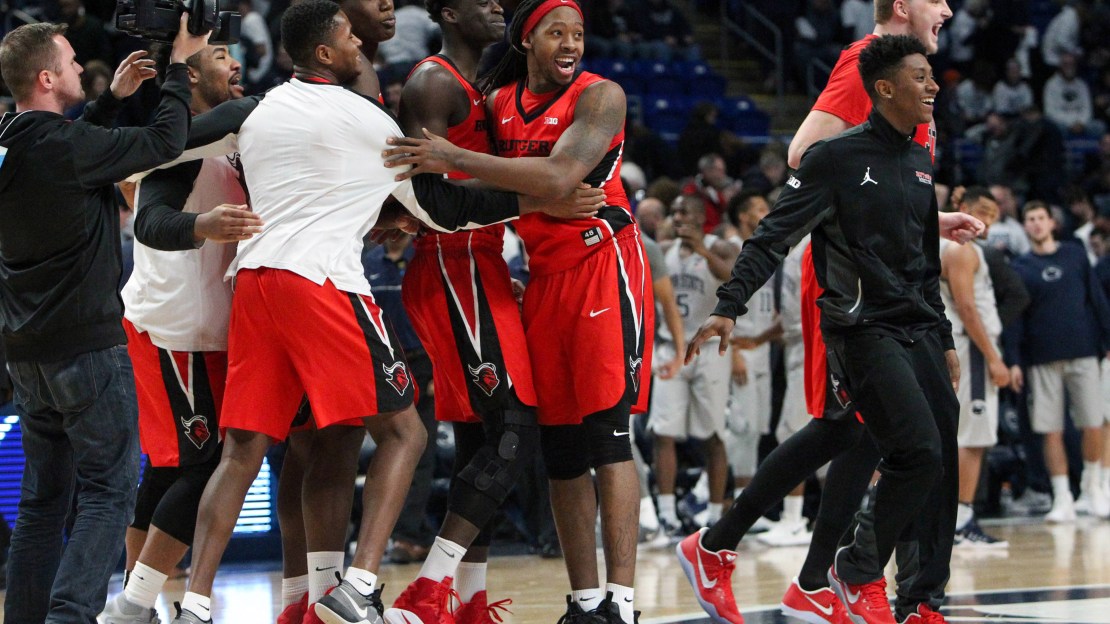 (AP) The Scarlet Knights could leave Happy Valley with smiles on their faces.

It's something they're not used to, considering Saturday's victory over Penn State was the first time ever Rutgers has left a Big Ten opponents' arena with a win.

"We've come a long way and it's hard to win in this league," Rutgers coach Steve Pikiell said. "There are terrific teams that are well-coached."

"I was really excited about the toughness he showed today," Pikiell said of Sanders. "He made some big plays down the stretch. When he plays like that it really helps everybody."

Rutgers, who had just four wins in the Big Ten since joining the conference in 2014-15, was 0-23 on the road in the Big Ten. The last conference win was 2014, beating South Florida, a member of the American Athletic Conference.

"Obviously, we were on a stretch there, a long stretch and I was tired of reading about it. I didn't want to be known by that kind of streak. So, our guys did something about it and I'm happy for them," Pikiell, the first-year coach, said. "They worked hard and they decided they were going to win a road game and they did."

Penn State stormed back, closing to 69-68 with 11 seconds left, but didn't get closer.

"We're going to get back up with two feet in the ring and continue to fight."

Both teams shot well from beyond the arc. Rutgers was 7 of 16 from 3-point range while Penn State was 9 of 19.

Rutgers entered the game fourth nationally in rebounds per game at 42.3. The Scarlet Knights stayed close to its season average with 39.

STRUGGLES FROM THE CHARITY STRIPE

Rutgers entered the game last in the Big Ten in free throw shooting, and showed why. Rutgers went 13 of 23 from the foul line.

Rutgers: The Scarlet Knights hope bouncing back from a 20-point home loss to Iowa with its first conference road win can get it back on track. Rutgers had lost four in a row and 10 of the last 11 after an 11-2 start.

Penn State: The Nittany Lions continue to struggle, now having lost five of its last six games after starting off Big Ten play 4-2.