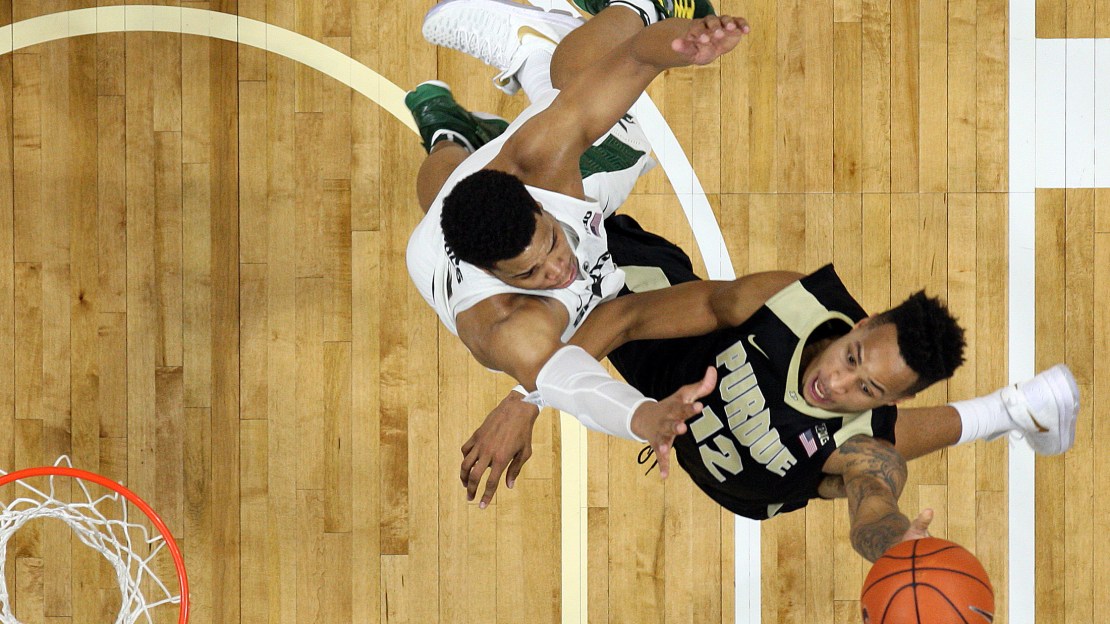 As we near the midpoint of the conference season, my Big Ten Player Rankings continue to be fluid.

This week, Michigan State high-flyer Miles Bridges, the two-time reigning Big Ten freshman of the week, is the biggest mover, going from No. 9 to No. 5. There's also two new names, one of them making his debut on the list.

1. Caleb Swanigan, Purdue. Swanigan collected his national-best 18th double-double in a loss at Nebraska, but the Cornhusker defense frustrated the star forward into turnovers and poor decision-making with their harassing double teams.
Last week: 1

2. Ethan Happ, Wisconsin. Happ kept then-No. 15 Wisconsin in first place with a monster week, highlighted by a 32-point, six-rebound, three-assist, four-steal, two-block performance in an overtime win vs. Rutgers at Madison Square Garden. If he keeps this up and the Badgers keep winning, Happ could make the Big Ten Player of the Year race interesting.
Last week: 3

3. Melo Trimble, Maryland. Trimble played some of the wisest minutes of his season in a well-executed road win Saturday at Minnesota. The 13 points and seven rebounds were good and all, but it was the nine assists and zero turnovers in a hostile environment that stood out. He's the biggest reason Maryland is 8-1 in games decided by six points or less.
Last week: 2

5. Miles Bridges, Michigan State. Bridges followed up his career-high 33-point effort vs. Purdue with a clutch double-double (15 point, 13 rebounds) in Michigan State?s rivalry win over Michigan. The high-flyer continues to improve and is ranked in the top 10 in scoring, rebounding, blocks, and, unofficially, tomahawk dunks.
Last week: 9

6. Scottie Lindsey, Northwestern. The junior had a uncharacteristic down week, averaging 8.5 points, four rebounds and one assist in easy wins vs. Nebraska and Indiana. More importantly, his all-around game is a major reason why Northwestern is 7-2 in conference play, its best nine-game start since 1937.
Last week: 5

7. Nigel Hayes, Wisconsin. Hayes struggled from the field (4-of-14; 29 percent) in wins vs. Penn State and Rutgers, however he snagged eight and 11 rebounds, respectively, to go along with a total of eight assists to help keep the Badgers in first place.
Last week: 4

8. Bronson Koenig, Wisconsin. Koenig scored 20 points in a blowout win over Penn State. He was only 2-10 from beyond the arc vs. Rutgers, but his clutch (go figure) 3-pointer late helped save the Badgers from being upset in Madison Square Garden on Super Saturday.
Last week: 10

10. Vic Law, Northwestern. Law is back in the top 10 after a historic week for Northwestern. The athletic wing is a premier defender, plus he's fresh off a week that included a 20-point effort vs. Nebraska and a 12-rebound night vs. Indiana.
Last week: NR