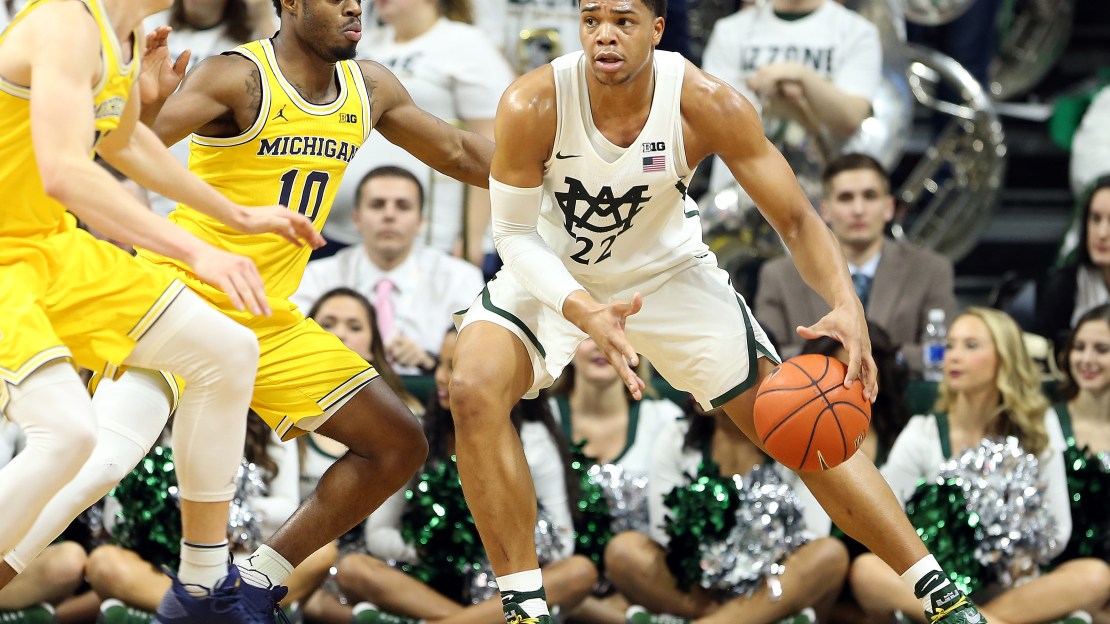 (AP) Michigan State had a trio of freshmen play like savvy and talented veterans in their first game against Michigan.

Miles Bridges had 15 points and 13 rebounds, Cassius Winston scored 16 and Nick Ward added 13 points to lead the Spartans in a 70-62 win over the Wolverines on Sunday.

"We knew the intensity level was going to be higher than any other game," Bridges said. "We just had to stay poised, keep our calm and just continue to do what we do."

"Every game right now is a must-win to turn our season around," Winston said.

The Wolverines (14-8, 4-5) had won two straight and three of four, improving its chances of getting off the bubble and into the NCAA Tournament.

Michigan State outscored Michigan by four points in each half in an emotionally charged game with 12 lead changes and eight ties.

Derrick Walton scored 19 of his season-high 24 points after halftime for the Wolverines, but didn't get a lot of help. Michigan's leading scorer, Zak Irvin, was scoreless on 0-for-8 shooting after not being able to practice in the days leading up to the game because of an illness.

"I don't think he felt well, but he gave us everything he had," Walton said.

Moritz Wagner had 10 points and eight rebounds for the Wolverines, who got eight points apiece from D.J. Wilson and Duncan Robinson.

Michigan was held to 34 percent shooting, its worst performance in the Big Ten this season, after making 63 percent of its shots in a 30-point win over Indiana at home on Thursday night.

"They shut down a lot of things that we do," Wolverines coach John Beilein said.

Michigan: The Wolverines will have a hard time making the NCAA Tournament if they can't figure out how to win on the road. They fell to 0-6 on opponents' home courts this season and have lost nine straight since winning Feb. 10, 2016, at Minnesota.

Beilein said his team has had the string of setbacks as visitors because of two or three possessions in each of those games.

Michigan State: The Spartans earned a much-needed win for their hopes of extending their Big Ten record of NCAA Tournament appearances to 20 straight.

Michigan State's Matt McQuaid made all three of his 3-pointers for nine points after making a total of five 3-pointers in eight Big Ten games this season and scoring just eight points the previous four games.

"We've been on Matt a lot about his confidence because he's a great shooter," Bridges said.

Michigan State's coaching staff, most of its players and Michigan's staff wore yellow laces to raise awareness and money for American Cancer Society while honoring Lacey Holsworth . Nearly three years ago, the 8-year-old girl died because of nerve-cell cancer. Her family was given a rousing ovation during a timeout.

Michigan: Hosts Ohio State on Saturday before a rematch with the Spartans at home a few days later on Feb. 7.

Michigan State: Plays at Nebraska on Tuesday before getting four days to prepare for the Wolverines.

"It's not like football where you get to gloat for 365 days," Izzo said.