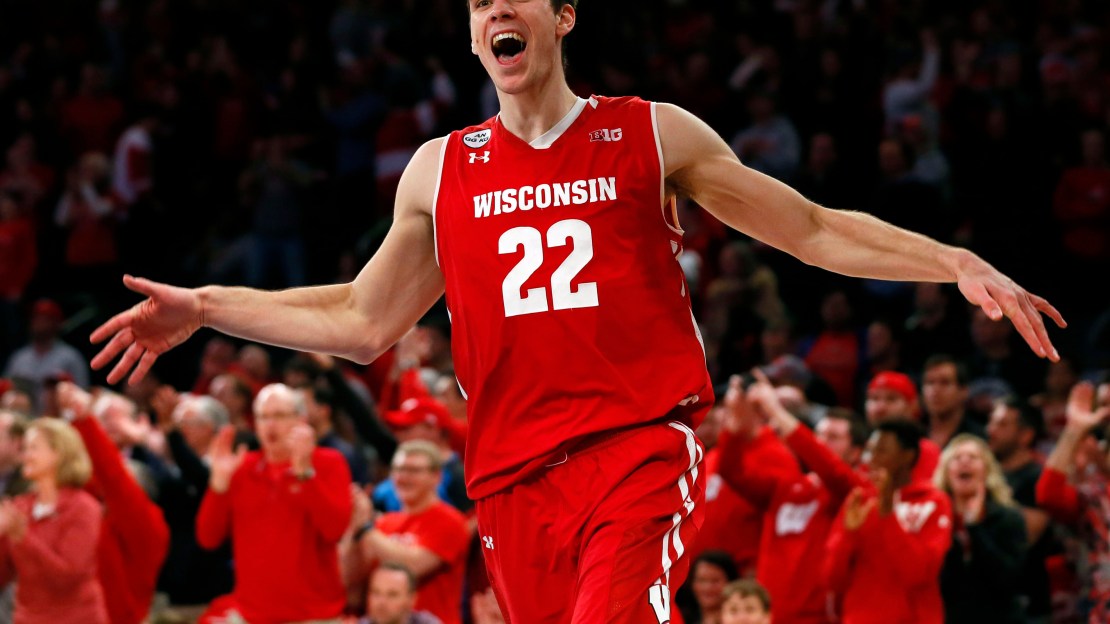 (AP) Ethan Happ had just scored 32 of Wisconsin's 61 points and when he was done with a TV interview, the Badger fans at Madison Square Garden cheered him as he left the court waving and blowing kisses.

"It's always special to play in MSG but once you get going it turns into a basketball game," the sophomore forward said after the 15th-ranked Badgers survived a bad offensive game for a 61-54 overtime victory over Rutgers on Saturday. "But when you get a curtain call in Madison Square Garden you're not going to turn it down."

Happ scored seven of his career-high total in the overtime and he scored eight of Wisconsin's points in the 13-4 rally to close regulation, including the basket that tied it at 45 with 2 seconds left.

"No one could throw it in the ocean for most of the game," Wisconsin's Bronson Koenig said. "But we keep battling when things aren't going our way. We get in the post to Ethan and he's a great player and made the right reads."

The Badgers are tied for first in the Big Ten with No. 22 Maryland. They have won 14 of their last 15 games.

Wisconsin struggled with its shooting, but the Badgers made six of their seven shots in the overtime.

"We had to find other ways to win besides scoring," Wisconsin coach Greg Gard said. "The maturity of this group was evident. They didn't panic in the huddles. Credit our guys for the way they gutted it out defensively."

They took the lead for good on a reverse by Happ on which he was fouled. He missed the free throw but corralled it and laid it in for a 51-48 lead with 2:42 to play.

Both the field goal percentage and 3-point percentage were season lows for Wisconsin.

"I thought their defense had an extra gear tonight," Koenig said of Rutgers. He finished 2 for 13 from the field including 2 of 10 from 3-point range.

Rutgers finished with a 44-41 rebound advantage but the Scarlet Knights committed 19 turnovers that turned into 17 points for the Badgers.

"With them it's pick your poison," Rutgers coach Steve Pikiell said. "They have the 3-point shooters and they have Happ inside."

"We're getting there," the first-year coach said. "We have to figure out a way to win down the stretch and make that big bucket."

Wisconsin: The Badgers were making their third appearance at the current Madison Square Garden. They split two games last season. … Nigel Hayes is the only player in Division I to accumulate 1,600 points, 650 rebounds and 250 assists. He is third highest active scorer behind Bryce Alford of UCLA and Josh Hart of Villanova. Hayes had seven points, 11 rebounds and four assists on Saturday.

Rutgers: The Scarlet Knights were making their 100th appearance in the current Madison Square Garden and they have a 45-55 record. They won their earlier appearance this season, beating Fordham 68-53. … Rutgers' last win over a ranked opponent was a 67-62 victory over then-No. 4 Wisconsin on Jan. 11, 2015.

This was the second time the Big Ten hosted a basketball-hockey doubleheader at Madison Square Garden. Last year it was Penn State and Michigan in both games. This year, Wisconsin plays Ohio State in hockey.

The Big Ten will play its conference tournament at Madison Square Garden in 2018.

Wisconsin is on a roll, and this week's wins over Penn State and Rutgers won't impress many voters but the Badgers should be flirting with the top 10.

Wisconsin: The Badgers are at Illinois on Tuesday.