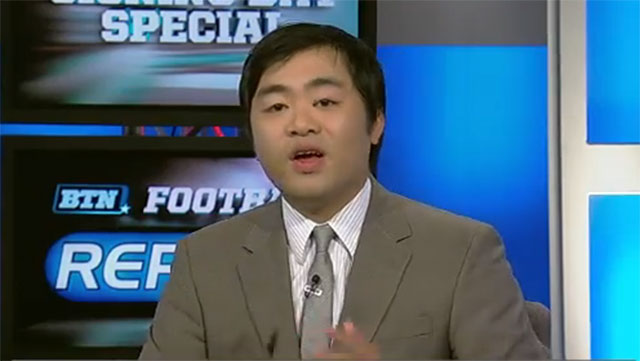 As legend has it, former Illinois coach Ron Zook used to say: It?s not about the Xs and Ox, it?s about the Jimmys and the Joes. Translation: No matter how big and fancy your playbook is, the team with the better players almost always comes out on top. Talent acquisition is what it?s all about, and the high holy day for recruiting is February 1, national signing day. This is when rosters are built and the foundations for championships are laid.

I spoke with Allen Trieu (@AllenTrieu on Twitter), the Midwest Recruiting Manager for Scout.com, to get the low-down on how Big Ten recruiting is taking shape with Signing Day approaching.

Q: Which schools are leading the way?
A: I think it?s Michigan and Ohio State. They are the top two right now and it likely will stay that way. And they also are currently in the national top five. They both have been at a pretty high national level in recent cycles.

Q: Are there any surprise teams?
A: Maryland. They may be the biggest surprise in the country. They are 11th nationally now. They have 28 commitments. And eight of those guys are four-star guys. You couldn?t have asked for anything better out of (DJ) Durkin. They have started to win but aren?t at where he?d like them to be. But the way he?s recruiting now bodes well for them in future seasons.

Q: Any other surprises?
A: I don?t think so. For the most part, everyone is about where they usually are. You could consider Rutgers a bit of a surprise. I think Michigan State may surprise some people. They are 18 in the country and five in the conference. I think people may have expected after the season they had that they wouldn?t have a great class. But they got a lot of these commitments before the season. And I think they will close strong. People may have thought the on-field season they had would impact their class, but that hasn?t been the case. They will end up signing a really strong class.

Q: Which Big Ten schools are in your Top 25?
A: We have six right now, Michigan, Ohio State, Maryland, Penn State, Michigan State and Nebraska. It would take a lot for a seventh to jump in. Minnesota is closest. With P.J. Fleck doing what he?s doing, it?s a possibility.

Q: What impact has new Minnesota coach P.J. Fleck had?
A: He is having a big impact. People talk about the kids he flipped from Western Michigan. But it hasn?t been just those kids. He has since gotten other committed. He got Demetrius Douglas who had offers from Oregon and Notre Dame. Even the guys who flipped from Western Michigan, none of those kids ever have even been to Minnesota. So their commitment is all based on Coach Fleck. It was all trust in them. They also got a QB in Ray Estes, who was looking at Missouri and Illinois. I think you will see him take it to another level in the 2018 class.

Q: Is Penn State getting much of a push from its improbable Big Ten title?
A: The championship certainly helped them. A lot of the class was committed before then. But when you look at what they?ve added, two four-star guys and a five-star guy ? I think that Big Ten title game helped them finish strong. But I think it will help them more in the next class. When you look at the commitments they got in December and January, no question the way they ended the season helped.

Q: Is Jeff Brohm doing OK at Purdue?
A: He hasn?t had the same immediate impact as Fleck, but I think they are setting up for a good close. They have had a lot of kids on campus. I think he has a tougher job than Fleck. Minnesota went to a bowl and has some momentum. Brohm has a tougher job coming in. But he?s going after the kind of kids he was successful with at Western Kentucky. He is looking at some JC kids to help right away.

Q: How is Lovie Smith doing with his first class at Illinois?
A: He came in at a disadvantage. Things for this class already were in pretty high gear. Having a good class wasn?t always a certainty. He has tried to emphasis in-state recruiting. He has been able to pick up quite a few kids in-state that had a lot of other options. It starts at home. And when you look at what they have done in Illinois and Missouri, they have recruited well.

Q: When it?s all said and done, who will have the top class in the Big Ten?
A: Michigan is higher ranked now because they have more commits. But Ohio State has by far the highest ranking per player average in the entire country. They are averaging well over a four-star prospect. But Michigan probably will end up higher ranked nationally. But in terms of quality per player, Ohio State has one of the best classes in the country.

Q: Who are the top committed players?
A: The highest committed player is Chase Young, a defensive end from Maryland who is headed to Ohio State. He is 6-5, 240 pound edge rusher. We think he?ll fall in line with some of the other great pass rushers they have had recently. They also have the No. 2 safety coming in Jeff Okudah. He may play right away with all those players turning pro. Lamont Wade is a DB going to Penn State who is a top 20 guy in the country. And Iowa will sign a five-star defensive end in A.J. Epenesa, who we think will play right away. Michigan has the No. 1 receiver in the nation in Donovan Peoples-Jones from Detroit. Those are some of the highest-rated guys.

Q: Where will the Big Ten rank compared to the SEC?
A: Likely to be behind the SEC, which figures to have the top two classes with Alabama and Georgia. But the Big Ten isn?t far off. But I think it will be SEC No. 1 and Big Ten No. 2.