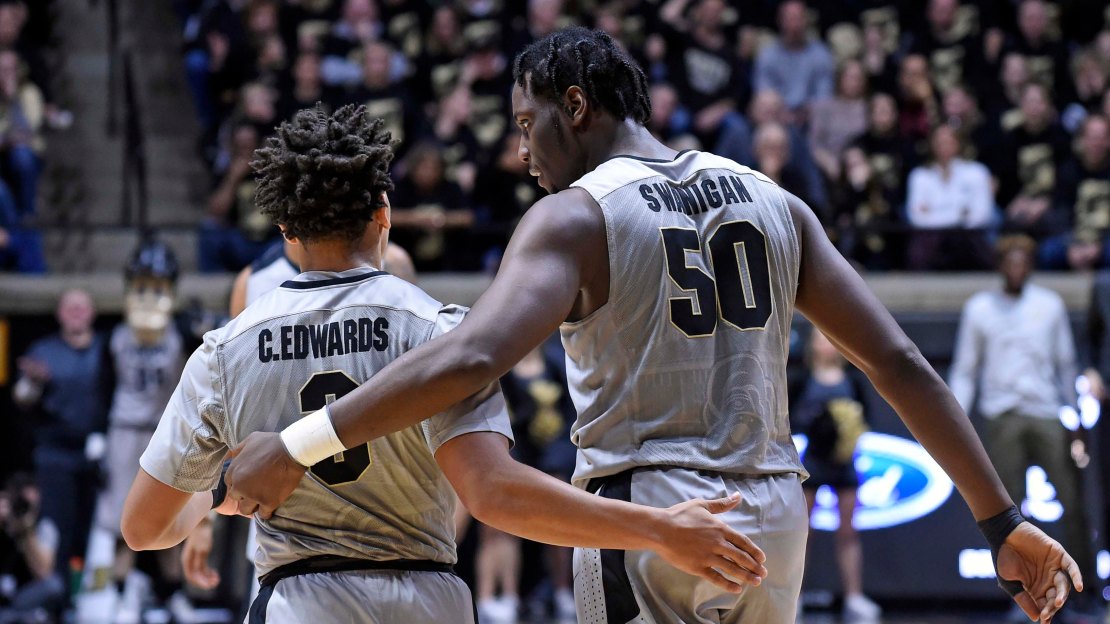 Let?s not beat around the bush and just say it: It?s make-or-break time for Purdue.

The Boilers are playing well. In fact, you could make the argument that the Boilermakers are the best team in the Big Ten. Over the next five games, Matt Painter?s team will get a chance to prove it.

It begins tonight with a game at Michigan State, a desperate team that is 4-3 in the Big Ten (12-8 overall) and has lost three of its last four games. That?s followed by a trip to Nebraska, a visit from Northwestern, and games at Maryland and at Indiana.

Say it with me: Wow.

?When you get into games, especially on the road, when it doesn't go your way, you're not shooting the ball well, can you continue to defend or do you let the offense dictate how you play, how you handle yourself?" Painter said after thumping Penn State on Saturday.

We shall see how Purdue responds in hostile settings.

It?s difficult to envision the Boilers winning all five of these games. But if they do, they will be sitting pretty. They may even be in first place. At the worst, Purdue probably needs to go 3-2 in this brutal stretch if it wants to remain in contention. Anything worse could sink the Boilermakers? league championship dreams.

Why this sense of urgency? Purdue lost a couple of Big Ten games it should have won. The cold, hard truth: The Boilers should be 7-0 in the Big Ten as I type this. Instead, the Boilermakers are 5-2, looking up at 5-1 Maryland and 5-1 Wisconsin, both of which have advantageous remaining schedules. The Boilers let two games slip away, blowing a seven-point second-half lead at home in an overtime loss to Minnesota and squandering a nine-point halftime edge in a loss at Iowa.

Those were tough losses. Those were games a Big Ten-championship-caliber team typically will win. Purdue didn?t. Now, it has little wiggle room left if it wants to win its first conference championship since 2010.

Now, the Boilermakers have a chance to make amends for the Minnesota and Iowa losses. But it?s going to be tough.

Purdue looked very good the last two times out, smashing Illinois (91-68) and crushing Penn State (77-52). Caleb Swanigan has been playing like a beast, the best player in the Big Ten and perhaps the best in the nation. Witness his national-high 16 double-doubles. Vincent Edwards also is a key cog, a slasher who can run the court and shoot.

And keep an eye on freshman guard Carsen Edwards. He may be the key cog. Edwards is unlike any other player on Painter?s roster, an explosive athlete who is a fearless attacker who can shoot and distribute. But he?s also prone to play too fast, commit turnovers and take bad shots. Young Carsen must play well over the daunting five-game stretch.

But no one is going to confuse Illinois and Penn State as Big Ten contenders. And both convincing victories came in the cozy confines of Mackey Arena. The next five games will be considerably more challenging. In fact, it?s a run of games from January 23-Febraury 9 that will determine Purdue?s fate as a Big Ten title contender.

The road is where titles are won. And the road hasn?t been especially kind for the Boilermakers, who have won at Ohio State and lost at Iowa and at Louisville. Purdue looks ready for the challenge. This is gonna be interesting.

"I would just say we were coming out ready to play," said Edwards after the Penn State game. "Our goal is to win the Big Ten. Our focus is to take care of business."