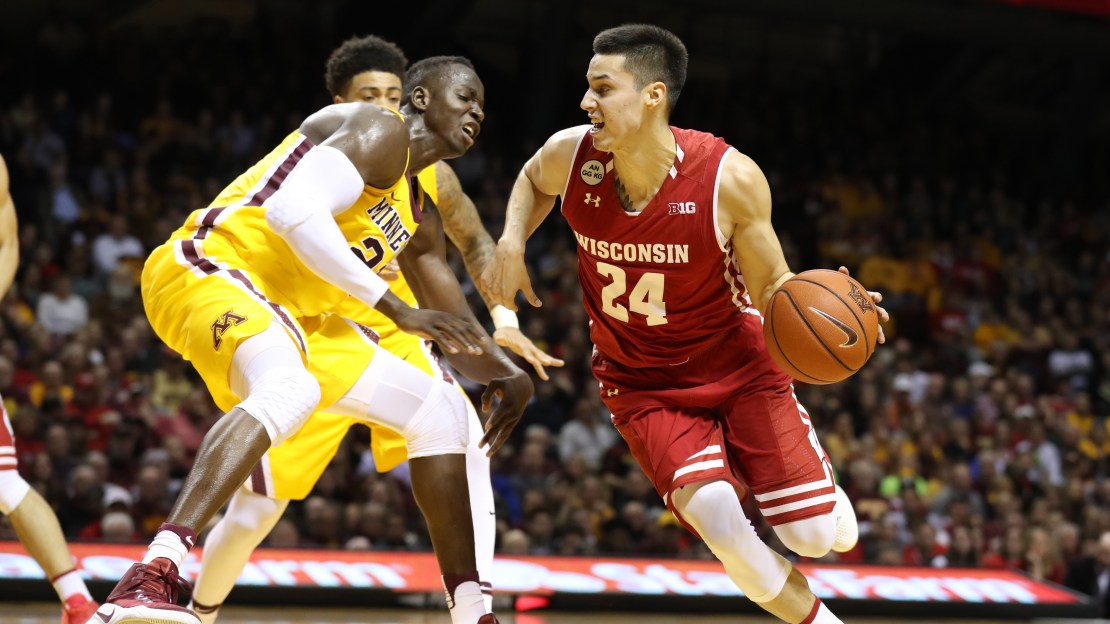 Some great, fun games this week, including a few that included game-winning shots in the final moments. Amid those thrilling finishes, it?s becoming clearer that Wisconsin and Maryland are the teams to beat as each is 5-1 in league action.

In case you are wondering, they meet just one time this year: in Madison on Feb. 19. Northwestern continues to surge, winning four in a row and looks primed to get its first-ever NCAA bid. Meanwhile, Michigan State is struggling, losing three of its last four. Will this team get on track?

Biggest surprise: Indiana. The Hoosiers entered the week struggling, losers of four of their previous six. To make matters worse, star OG Anunoby suffered a season-ending knee injury Wednesday night. No worries, Indiana managed to win at Penn State and vs. Michigan State without one of the conference's elite players. Consequently, IU has won three in a row and four of five to improve to 4-3 in the Big Ten and 14-6 overall. Don?t give up on the defending Big Ten champs just yet.

Biggest disappointment: Nebraska. Remember when the Cornhuskers started Big Ten play with a 3-0 mark that included wins at Indiana and at Maryland? Seems like years ago. Now, Nebraska has lost four in a row with the latest two defeats coming at the last second. The latest defeat, Saturday at Rutgers, came against a team that entered the game with a 3-39 all-time record in Big Ten play and no league victories this season. Things won?t get easier with games at Northwestern, vs. Purdue and vs. Michigan State coming up next.

Best game: Wisconsin at Minnesota. No contest, as this one featured bitter rivals playing an overtime thriller that wasn't decided until the final seconds. As he's done so many times before, Bronson Koenig was the hero, hitting a massive 3-pointer with 44 seconds left to give the Badgers the go-ahead bucket.

Best player: James Blackmon Jr., Indiana. The junior had a big week. First, he hit a game-winning shot at the buzzer to down Penn State. Then, he hit 11-of-16 shots (6-of-10 three-pointers) en route to scoring 33 points in an 82-75 win vs. Michigan State. The 33 points matched a career-high. He averaged 25 points, 4.5 rebounds and two assists, all while shooting 57 percent, in the two victories.

Best stat line: Ethan Happ, Wisconsin. Happ tallied a career-high 28 points and added 12 rebounds, six assists and five blocks to lead No. 17 Wisconsin to a 78-76 overtime victory over Minnesota on Saturday. The Wisconsin big man got off to a slow start in the game, missing several easy shots early. But the Badgers never would have made it to OT without his performance in the second half. He scored 14 straight for the Badgers at one point and almost single-handedly fouled Reggie Lynch out of the game.

Best stat: 1977, the year of Northwestern's last win at Ohio State, before Sunday afternoon's victory in Columbus, Ohio. There were several bear hugs following this long-awaited triumph, including one between football coach Pat Fitzgerald and Chris Collins. Northwestern is 5-2 in the Big Ten, tied for third with Purdue. The team is looking more and more like an NCAA squad.

Just in case you didn't see this, @NUMensBball fans. pic.twitter.com/Q6EWgaAzB0

Best stat, Part II: 16, Caleb Swanigan's double-doubles on the season, the most of any player in D-I.

Best shot: There are three of them, all coming in the last seconds. First, Indiana?s James Blackmon drilled an off-balanced 3-pointer at the buzzer to lead IU to a 78-75 win Wednesday night at Penn State. On Saturday afternoon, Rutgers? Corey Sanders missed his first potential game-winner, only to grab the rebound and tally the game-winning hoop with one second left in a 65-64 win for the Scarlet Knights, their first Big Ten win of the season. Finally, on Saturday night, Bronson Koenig did what Bronson Koenig does.

Best dunk: Thomas Bryant at Penn State. The Indiana sophomore showed off his athleticism and power on a posterizing And-1 finish in the Hoosiers' win Wednesday night.

Best moment: Legendary Purdue coach Gene Keady was on hand Saturday at Mackey Arena, as part of a bobblehead promotion, and he spoke to the crowd during halftime. About that bobblehead, there's a pretty good resemblance. Take a look.

Did you see this? While waiting to conduct their pregame BTN interviews, Matt Painter and Patrick Chambers played interviewer and interviewee, respectively, in a fun and entertaining moment. Not that he has to consider it any time soon, but Painter seems awfully comfortable on the other side of the mic, doesn't he?