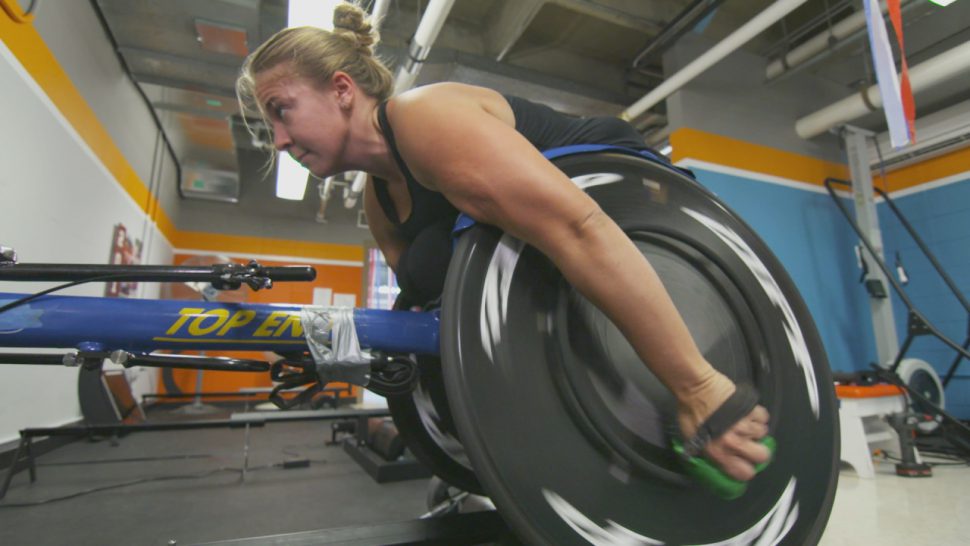 Elite wheelchair racers are among the most intense athletes in the world. Grueling training regimens push them to the upper echelon of physical conditioning. And like most athletes, they rely heavily on their equipment. Racing chairs are custom made to the individual specifications and needs of the athlete. So too is a pair of items that may go unnoticed by spectators: racing gloves.

?In order to propel your racing wheelchair, [you] custom-make these gloves,? explains University of Illinois wheelchair racer Arielle Rausin. ?What?s really important is your groove because when we?re using our racing wheelchairs, we?re not grabbing the rings at all to propel ourselves; we?re actually punching them as fast and as hard as we can.?

To fabricate a pair is a costly and laborious process. It involves an experienced maker melting down plastic beads that mold to the contours of an athlete?s hands and working with that athlete to ensure that the gloves are in sync with his or her chair. These elite-level gloves, says Rausin, will run anywhere from $350-$450, a price some racers find prohibitive.

When she?s not out on the track, Rausin is busy pursuing her bachelor?s degree in business at Illinois. It was in one of her classes that she was presented with a unique opportunity.

?[A] professor asked me if I would be interested in taking a 3-D printing course,? says Rausin. ?That sounded really interesting to me. I?d heard of 3-D printing, but I had no idea what it really was or how it worked.?

As part of the course, guest lecturer Travis Ross, manager of the university?s Visualization Lab, asked each student to bring in an object to be scanned. Rausin was at a loss for what to bring, until her coach suggested her gloves.

It turned out to be a moment of inspiration for Rausin. The gloves scanned perfectly, so she decided to see if they?d print just as well. After putting on some finishing touches, Rausin realized she had a near-perfect replica of her expensive racing apparatus. She just needed to test them out.

?Five week after I printed out my first pair, I used them in the Boston Marathon,? says Rausin. ?They worked the whole time and they didn?t break.?

Shortly thereafter, her teammates became asked Rausin to scan and print their gloves. Working with Ross, Rausin perfected her process and was soon producing durable gloves at a fraction of what it would cost to have them made elsewhere. The materials used had an added benefit: they?re lighter than what?s used in commercial gloves, which can shave seconds in a race.

?I wanted to create a company that increases access to the sport as my main mission,? says Rausin. ?If a kid can get a [racing] chair through an incredible organization like the Challenged Athlete Foundation and gloves from me, that?ll get them started.?

One thing is for sure as Rausin gets Ingenium off the ground: she won?t lack for celebrity endorsements. This past summer in Rio, nine U.S. Paralympic athletes used her gloves to propel themselves to ten gold medals, proving Rausin?s gloves deliver the kind of performance that can?t be ignored.