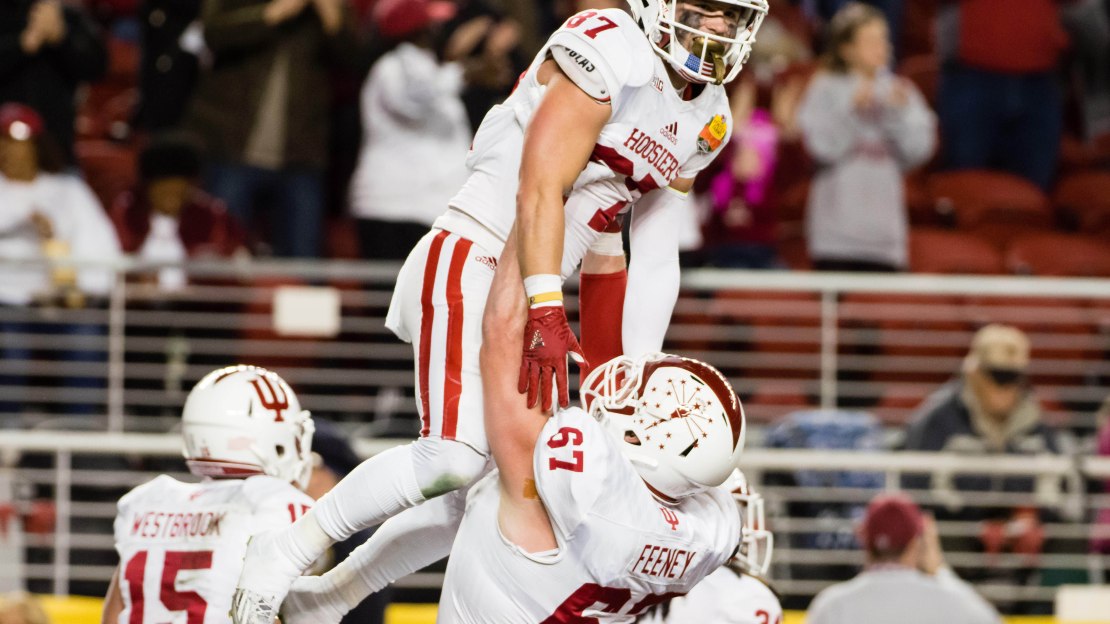 There has been lots of change at Indiana since the Hoosiers won the Old Oaken Bucket for a fourth time in a row, as Kevin Wilson is out as coach and now is the offensive coordinator at Ohio State. In his place, Indiana promoted defensive coordinator Tom Allen, who has been in Bloomington one season and never has been a head coach. And Allen already has shaken up the staff, ousting offensive coordinator Kevin Johns and hiring veteran Mike DeBord, who was running the offense at Tennessee.

All this for a program coming off back-to-back bowls for the first time since 1990-91. On the field, there also will be some big changes, as IU looks to keep the mojo going and earn its first winning season since 2007.

Here is a look at the Top Five Hoosiers that will need to be replaced.

G Dan Feeney. He will leave as an all-time great. The powerful Feeney was an AP first-team All-American and consensus first-team All-Big Ten selection. He played guard and tackle last season and helped the Hoosiers have the No. 3 offense in the Big Ten (426.0 ypg) in 2016. IU will miss Feeney, along with center Wes Rogers.

DT Ralph Green III. He was a big reason why Indiana?s defense went from allowing 195.7 yards rushing per game in 2015 to 160.4 last season, as the 320-pound Green was honorable mention All-Big Ten by the coaches. Green was a force vs. the run, notching 31 tackles with 8.5 TFLs.

WR Ricky Jones. He made plays, finishing with 53 catches for 848 yards and three TDs and averaging 16.0 yards per grab to earn honorable mention All-Big Ten from the media. Jones formed a nice duo with fellow departed wideout Mitchell Paige, who had 58 grabs for 646 yards and four TDs. Jones will leave campus with 111 career catches for 1,814 yards and eight scores.

LB Marcus Oliver. He opted to turn pro after earning consensus honorable mention All-Big Ten honors. Oliver ranked second on the team with 96 tackles in 2016 and paced the Big Ten with five fumbles forced. He also had 15.5 TFLs with four sacks. Oliver was a big reason why IU went from allowing 509.5 yards per game in 2015 to 380.1 last season.