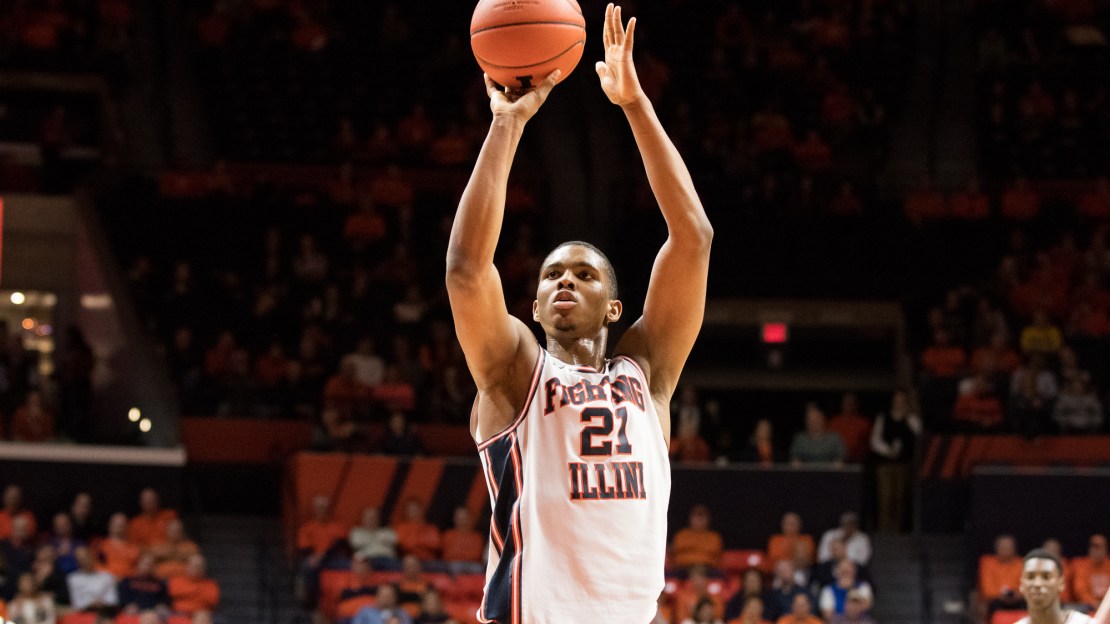 Illinois has missed the NCAA tourney each of the last three seasons, which is the school?s longest drought since missing the Big Dance from 1964-80. Illinois star Malcolm Hill knows that. And the senior wants to end it.

The Fighting Illini look to be in good shape as the Big Ten season gains steam. Illinois is 12-5 overall and 2-2 in the Big Ten, coming off an impressive 85-69 home victory vs. Michigan on Wednesday. But Hill knows Illinois has work to do, as many big games loom, including a visit from Maryland on Saturday followed by a trip to Purdue.

Illinois needs the 6-6, 225-pound Hill to be a star. And, so far, so good. He was a consensus second-team All-Big Ten selection last season, when Hill was the first Illini ever to record 600 points, 200 rebounds and 100 assists in a single season. He also was the lone Big Ten player to lead his team in scoring, rebounding and assists. And his 18.1-scoring average was the highest by an Illini in the last 13 seasons. This season is shaping up to be as good if not better for Hill.

Entering the week, the Belleville (Ill.) East High product was No. 2 in the Big Ten in scoring with an 18.6-point average. He also ranks in the top 20 in rebounding, pulling down 6.1 per game. I caught with Hill coming off his 15-point effort vs. the Wolverines.

Q: How big was it to take down Michigan on Wednesday night?
A: It meant a lot coming off a loss. We were looking for some type of way to get some momentum going. This was a good way to start off. Michigan is a good team with a good offense. I think we did a good job defensively. And I think that?s what helped our offense.

Q: What have you gotten better at this season?
A: I think I have become a better jump shooter. I think my three-point shot is better than it was last year. And I am making plays for teammates, just doing a better job of getting my teammates involved. And I have also become a better role player. What I mean by that is being better on the defensive end and being able to play without the basketball and to be effective without the ball.

Q: What teammates have stood out in your mind this season?
A: That is a tough question. I think a lot of us have gotten better. But a couple who are starting to stand out the most–and it?s probably because they are late-bloomers–are Te?Jon Lucas and Kipper Nichols. What they have been doing with the minutes they have been playing, they have done a great job. Another guy who has played well is Mav (Maverick Morgan), who also has done a great job being a big in the low post. Those are three that have stood out the most. But our whole team has gotten better since last year.

Q: Maryland rolls into Champaign this Saturday coming off a big home win vs. Indiana. How critical is that game?
A: They are a really good team. It will be a tough game because they have really good guards. They have a lot of good, young talent. We lost our first game against them so it will be nice to play them again.

Q: What is your favorite opposing Big Ten arena to play in?
A: I like Michigan State and Maryland. I like the student section at Michigan State; it goes around the whole court. I always thought that was pretty neat. And Maryland has one of the deepest student sections. When that arena fills up, it?s a really nice place a difficult place to play. Those are two of my favorite places to play.

Q: When it?s time to go out to eat, where do you head?
A: I?m a Chipotle guy. I eat it a lot. I usually get white rice, steak, corn and sour cream, cheese and hot and mild sauce.

Q: What?s the best part of Illinois? renovated basketball arena?
A: The locker rooms. We have a lot more space to ourselves. We also have a player lounge.

Q: Illinois has missed the last three NCAA tourneys. What would it mean to make it this year?
A: It would mean a lot because it has been so long since we have been there. And it would be the first time that I played in it. It want to experience that before my career is over.