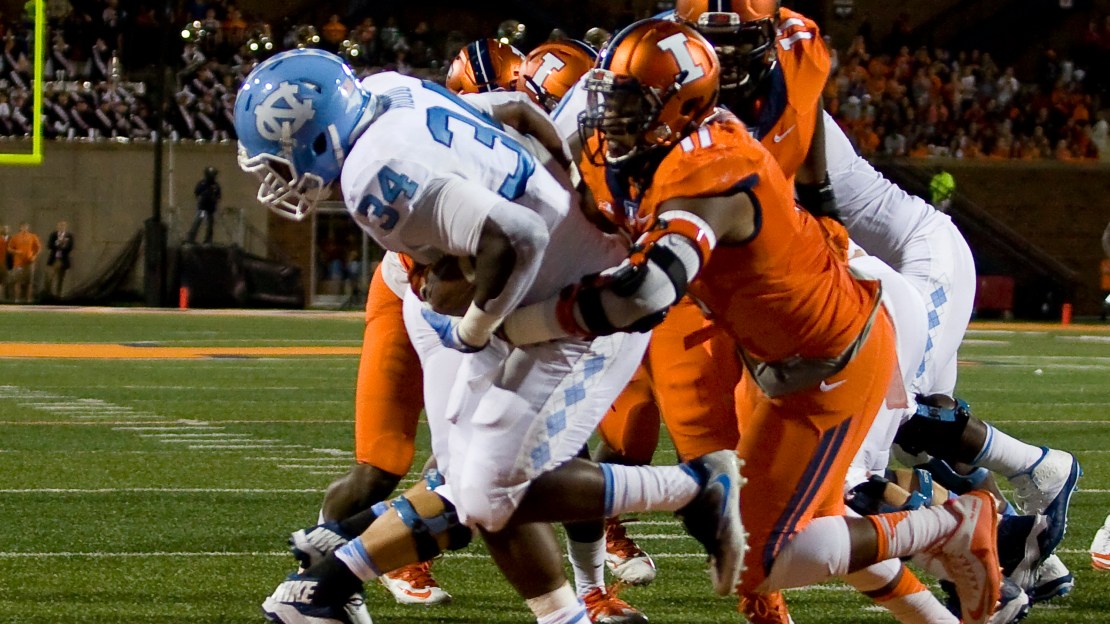 Illinois? Lovie Smith endured a debut that had its share of ups and downs en route to a 3-9 finish (2-7 Big Ten). Still, progress was made in Year One under Smith. Better days appear to loom ahead, but much work is needed to be done on both sides of the ball for an offense that was No. 13 in the Big Ten in scoring (19.7 ppg) and No. 12 in scoring defense (31.9 ppg).

Here?s a look at the top five players the Fighting Illini must replace.

QB Wes Lunt: His senior season didn?t go as planned, as Lunt dealt with injury that caused him to miss four games. And the Illini won two games with him out, as Lunt won just one start-the opener vs. FCS Murray State. He wasn?t an ideal fit for what Lovie Smith wanted to do from a skill-set standpoint at quarterback. Still, Lunt hit 54 percent of his passes for 1,376 yards with eight TDs and three picks, playing in eight games with seven starts. The team captain leaves campus with 7,008 career yards passing with 42 touchdowns and nine picks in a tenure that began at Oklahoma State before he returned home. Lunt tossed 36 TDs with 12 picks while with Illinois. He finished his career seventh in passing yards (5,900), seventh in completions (550) and eighth in TD passes (36) in Illinois history. He will play in the East-West Shrine Game.

LB Hardy Nickerson: He was a god-send after spending a grad transfer season in Champaign upon transferring from Cal. Nickerson was able to play for his father, who is the defensive coordinator. The younger Nickerson was a bellwether, leading the team in tackles and ranking No. 4 in the Big Ten (107 tackles, 8.9 per game). A team captain, he also had 5.5 TFLs with two sacks and two picks and was a consensus honorable-mention All-Big Ten selection.

DE Carroll Phillips: He was a revelation off the edge, earning first-team All-Big Ten honors from the media after ranking No. 2 in the conference in tackles for loss (19 solo, two assists) and No. 4 in the Big Ten in sacks (nine). Phillips was the first Illinois first-team All-Big Ten selection since 2011. Not bad for a guy who began his career at a JC.

DE Dawuane Smoot: A big-time NFL talent, Smoot enjoyed a big senior season, ranking No. 5 in the league in tackles for loss (12 solo, six assists). The team captain also had five sacks to go with 56 tackles with 10 QB hurries. He was a consensus third-team All-Big Ten pick and formed a nice duo with Carroll Phillips. Smoot is tied for sixth in Illinois history with 38.5 career TFLs and is eighth in Illinois history with 16.5 career sacks.

C Joe Spencer: A team captain, Spencer was the anchor of a line that struggled for consistency. Still, Spencer was a force who made line calls and rarely missed an assignment. He helped pave the way for RB Kendrick Foster to have some big games. Spencer, who made 37 career starts, was honorable mention All-Big Ten by the media.