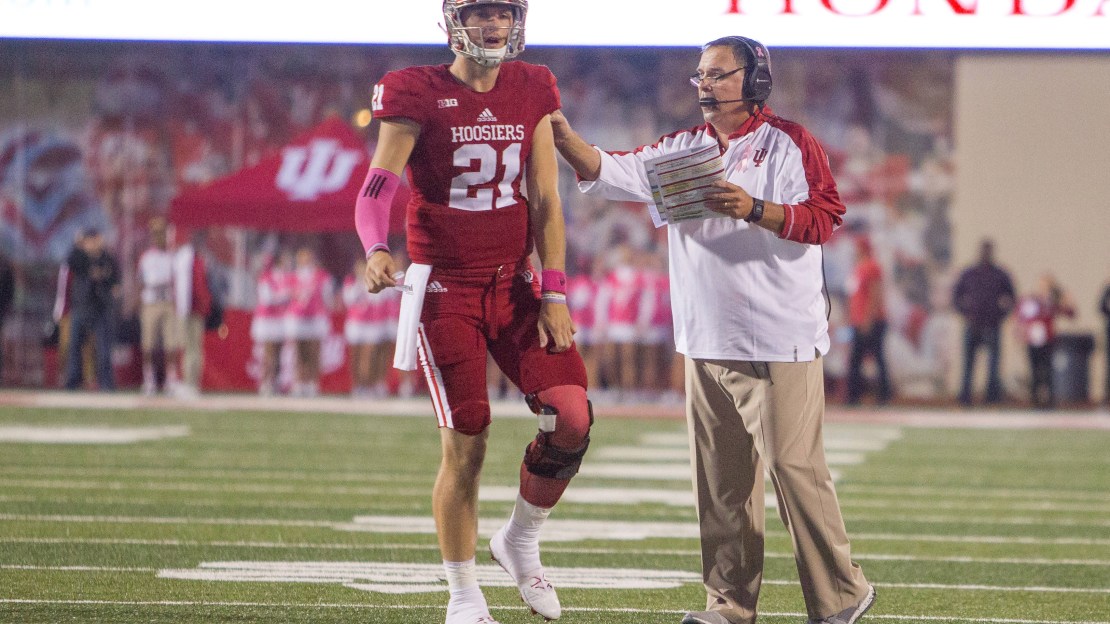 Humiliating. Humbling. Horrific. Whatever you wanna label Ohio State?s 31-0 loss to Clemson in the Fiesta Bowl, it was a night to forget for the Buckeyes. And it also was a night that has set Ohio State in another direction, as Urban Meyer has shaken up his offensive staff in hopes getting back on top in the Big Ten.

In a big move rumored for days, Meyer has tabbed former Indiana coach Kevin Wilson to jazz up a Buckeye attack that too often goes stale in big games. Wilson, who also will coach tight ends, is regarded as a bright offensive mind who elevated the Hoosier program the last six seasons, guiding IU to consecutive bowl bids the last two seasons. That hadn?t happened since 1990-91.

And Wilson did it with one of the Big Ten?s top offenses, blending a power run game with a dangerous passing attack all executed at a quick tempo from spread sets. At the end of the regular season, Indiana was No. 4 in the league in total offense (426.0 ypg) and No. 2 in passing (273.8 ypg), as the offense fell off from 2015 due to an injury-riddled line. IU also was breaking in a new quarterback and lost star wideout Simmie Cobbs to injury early on. Prior to taking over Indiana, Wilson enjoyed successful runs as offensive coordinator at Oklahoma and Northwestern.

But Wilson will arrive in Columbus with some baggage. He departed Indiana in early December amid philosophical differences with the A.D. over how to run the program. Reports suggested Wilson mistreated players. And Wilson will have work to do. Yes, QB J.T. Barrett is back, but RB/WR Curtis Samuel and WR Noah Brown have turned pro. And the line needs work, too.

And Day also has three years of offensive coordinator and quarterbacks coach experience working under Steve Addazio; in 2012 at Temple and in 2013 and 2014 at Boston College. Day has experience working with Meyer; in 2005 he was a graduate assistant coach during Meyer?s first season with Florida.

The Ohio State offense seemed to lose an edge ever since coordinator Tom Herman left after the 2014 national championship season to become coach of Houston-and now Texas.

The Buckeyes had good numbers the last two seasons. In 2015, OSU was No. 3 in the league in total offense, No. 2 in scoring and No. 1 in rushing. But it was No. 12 in passing. The offensive issues reared their head in an ugly 17-14 home loss to a Michigan State squad led by a backup quarterback on Nov. 21 that likely cost the Buckeyes a shot to win another national title. After the game, star running back Ezekiel Elliott questioned OSU?s play-calling after he ran just 12 times for 33 yards.

Still, the Ohio State offense never fully developed consistent big-play ability, especially in the passing game, vs. quality foes in an 11-2 season. That never was more apparent than in the humiliating loss to Clemson in the College Football Playoff. Barrett hit just 19-of-33 passes for 127 yards with two picks and the Buckeyes had just 88 yards rushing on 23 carries. Ohio State was blanked for the first time since 1993 and Meyer was shutout for the first time in 194 games as a head coach. There is too much talent on this Buckeye roster for the offense to struggle for consistency in big games.

Aside from Curtis Samuel, a running back/wideout hybrid, the receiving corps lacked dynamic playmakers. There are no Terry Glenns, David Bostons or Joey Galloways. And the line was average, at best. Add it all up, and Meyer felt he had to do something to improve his offense. Ohio State can?t afford a lull as it tries to keep pace with Big Ten East rivals Penn State, Michigan and Michigan State.