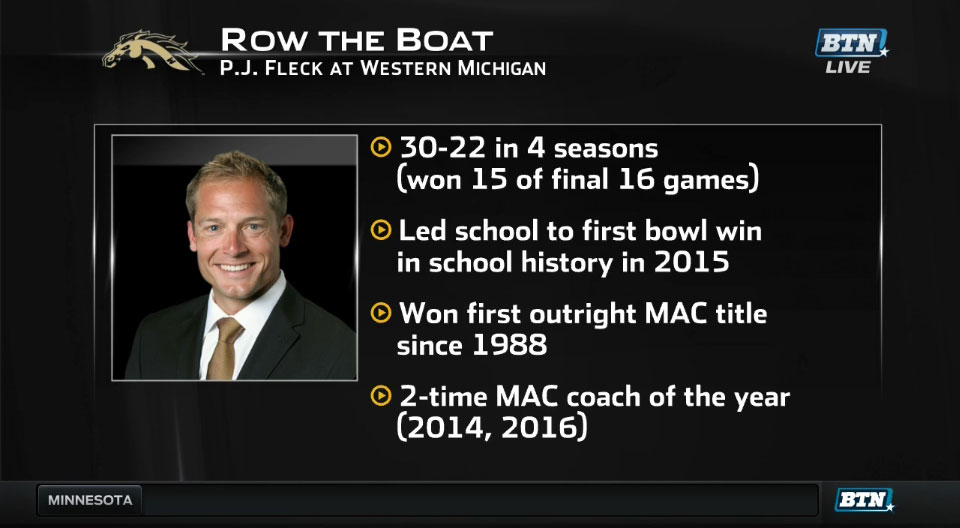 P.J. Fleck could hardly contain his enthusiasm. Can you blame him? Decked out in a charcoal gray suit, maroon-striped tie and yellow handkerchief, Fleck looked good. He looked ready. And he looked hungry. And, that?s important as he steps onto the Big Ten?s big stage, where he knows the possibilities are–well–big.

That?s why he?s here: To show he?s a big-time coach. And that?s what Minnesota needs. Fleck talked fast and furious on this day, sounding at times like a church tent revivalist. He was full of pithy phrases and bold proclamations.

But the lifting is heavy at places like Minnesota. This isn?t Ohio State, Michigan or Penn State. Yes, there are ample resources. But it takes work at schools like Minnesota, a place some term a ?developmental? program.

After all, there?s a reason why Fleck is the fifth coach at this school in the last 12 years. It?s hard.

?P.J. is a proven winner and a strong leader. He?s built a unique, positive culture that gets the best out of his students on the field and in the classroom,? said A.D. Mark Coyle. ?His infectious energy and passion make him a terrific coach and dynamic recruiter. I am excited he will be leading the Gophers for years to come.?

To call Fleck ?high-energy? is an understatement. He is 100,000 watts of electricity who connects with people-especially college kids. Fleck will need all of the juice he can muster. And, the boyish wunderkind seemingly has an endless vat of it, talking fast on this day. He?s a mere babe from a coaching standpoint, jetting to the top of his profession as just a 36-year old. But you know he?s not complacent. Fleck is here to build and leave a lasting mark and legacy. A fire burns in his belly. He knows he has critics who think he can?t replicate what he did at Western Michigan. Go ahead and doubt him. It?s his fuel.

Fleck isn?t in Dinkytown to go to the Foster Farms Bowl, or the Pinstripe Bowl, or the Outback Bowl. No offense to those postseason destinations. They are just fine and dandy, and Minnesota no doubt wouldn?t mind playing in them. But Fleck wants the Big Ten?s grand prize, the ?Granddaddy of them All,? the Rose Bowl. Or, as some are now dubbing it, the ?RowsBowl.?

That?s a nod to the mantra that Fleck coined upon taking over Western Michigan in 2013. What does ?row the boat? mean? It?s symbolic of the teamwork and grinding mentality that?s needed to be successful in life as a member of a team. It?s a simple task: row ? the ? boat.

Is it a bit corny? Yes. But if it?s done with diligence and persistence-and if those reciting it believe it–great progress can be made and big accomplishments can take place. And, Fleck did a lot at Western Michigan. Will he have a similar rally cry in the Twin Cities? (Western Michigan owns the trademark on ?Row the boat.)

In four seasons in Kalamazoo, Mich., Fleck went 30-22 overall and 21-11 in the MAC. He took the Broncos to a bowl each of the last three seasons after a 1-11 debut in 2013. And he saved his best for last, leading Western Michigan to a 13-1 overall record and an 8-0 MAC mark in 2016, earning a Cotton Bowl where the Broncos lost to Wisconsin. The season was highlighted by road wins over Big Ten foes Northwestern and Illinois.

Not bad for a scrawny former walk-on receiver at Northern Illinois who even managed to sip a cup of coffee in the NFL. This guy from the Chicago suburbs has been defying the odds his entire life. Why should he stop now?

"It's an honor to coach at Minnesota and be part of the Big Ten conference," said Fleck. "I want to thank president Eric Kaler, athletic director Mark Coyle and the Board of Regents for this opportunity. I also want to thank Western Michigan, my players and the great fans and city of Kalamazoo for a wonderful four years.

"I look forward to meeting my new players and getting to know them as quickly as possible. I am excited to put together a staff and turn my efforts to recruiting, but also want Gopher fans to know that my wife, Heather, and I and our four children will be visible in the community and we are eager to connect with them. I am ready to go. Ski-U-Mah!"

Ski-U-Mah. It?s the Minnesota battle cry. And it?s a phrase Fleck uttered a few times on this day. And will often in coming days, months and years.

Fleck got to this point on this day because of a body of work that made him the hottest young coach in America not named Tom Herman. And, it makes you wonder: If Fleck could win like that at a MAC school, what could he do at a Big Ten school?

Fleck knows this is a program that?s starved for stability. And he knows this is a school that seemingly can?t get out of its own way, as one embarrassing episode (ouster of A.D. Norwood Teague) after another (brief player boycott) seems to undermine the institution every few years. It?s safe to say ?rowing the boat? hasn?t been commonplace at Minnesota, a school Fleck said was his ?dream job.? But maybe that?s about to change. At least it better.

Fleck reportedly will be paid $18.5 million over five years to make Minnesota matter even more and finally to ascend to the top of the Big Ten West. And, who knows, maybe win the Big Ten. The last time that happened? It was 1967. The last time the Gophers played in the Rose Bowl? It was after the 1961 season, the longest drought among original Big Ten conference members. Fleck didn?t run from that history on this day. He embraced it and openly states that a national title is the goal. Really.

A big reason for optimism: Fleck?s ability to recruit. He?s a natural born seller who fits the cliché of the guy who could sell ketchup popsicles to people wearing white gloves on a 90-degree day. Fleck?s 2016 class at Western Michigan ranked No. 64 in the nation by rivals.com, ahead of Big Ten schools Illinois (68), Purdue (74) and Rutgers (78).

And Indiana was only nine spots ahead at No. 56. Minnesota was No. 51. And Fleck did that while selling a MAC school. Think about it.

Fleck has risen through the coaching ranks quickly. He began his coaching career as a G.A. at Ohio State in 2006 under Jim Tressel. From there, he coached receivers at Northern Illinois (2007-09) under Joe Novak and Jerry Kill and then coached receivers for Greg Schiano at Rutgers (2010-11) and with the Tampa Bay Buccaneers (2012). Fleck then landed the Western Michigan job.

Fleck will inherit a solid program. Jerry Kill and Tracy Claeys laid a foundation in Minneapolis. The Gophers have been to a bowl each of the last five seasons. And Minnesota posted a 9-4 mark in 2016 with a Holiday Bowl win over Washington State. In fact, the Gophers had a shot to win a share of the Big Ten West title entering the regular-season finale.

Now, Fleck is at Minnesota to kick down the door at a school whose best days are from a black-and-white era dotted with names like Warmath, Giel, Bierman, Smith and Nagurski.

This is going to be interesting, fun … and different.

?I?ve got news for you,? Fleck said. ?Change has arrived.?

Hurricane Fleck has blown into town. Brace yourself, Big Ten.