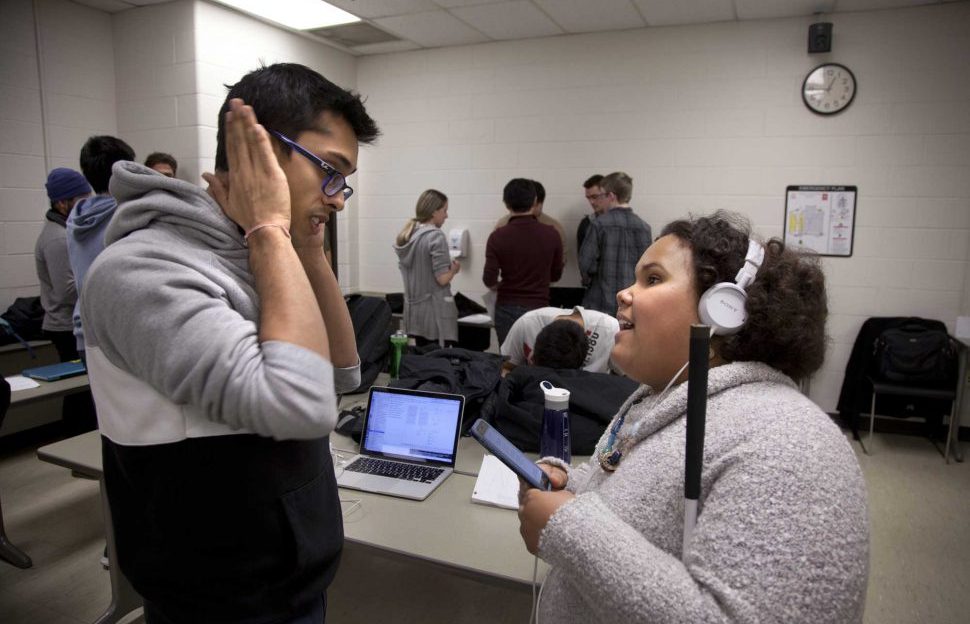 An entire class of University of Michigan computer engineering students is developing technology to aid people with visual impairments and it?s all thanks to a very special young woman.

India West, 17, was born with normal vision, but, when she was four years old, a benign brain tumor tangled with her optic nerve. Surgeries to remove the tumor had a lasting side effect, taking India?s sight from her.

She learned to navigate her world with the aid of a cane and her other senses. While some of her vision did eventually return, she can still only see shapes and light. The spectrum of colors and the specifics of facial features or words on a page are lost to her.

"I wasn't used to walking through the world in the dark," said West, speaking with Michigan News. "It was really scary, not knowing how to rely on my other senses."

Starting last semester, the students in David Chesney?s senior-level software engineering course began having weekly meetings with West. The class listened as West taught them about her daily life, what goes into navigating her world, and her ideas for how they might be able to help the visually impaired interact with a world designed largely for those with sight.

"By talking with India and seeing her perspective, I started thinking about the importance of considering users different from yourself during development," said Leda Daehler, a student in the class.

The idea is nothing new for Chesney, who has long impressed upon his students the need to consider the needs of others when thinking about design and engineering.

"There's this computer science myth that we build this thing and then we wait in our garage and somebody shows up to buy this thing and lavish money on us. But the reality is working with a customer, someone who looks at the project and says these are the things I like and these are the things I don't, is absolutely invaluable to a computer scientist, particularly when their usage patterns are completely different than the developers'."

Many of the students are using the upcoming semester to make the technology they created over the course of the class of real use to West. According to Michigan News, those projects include: