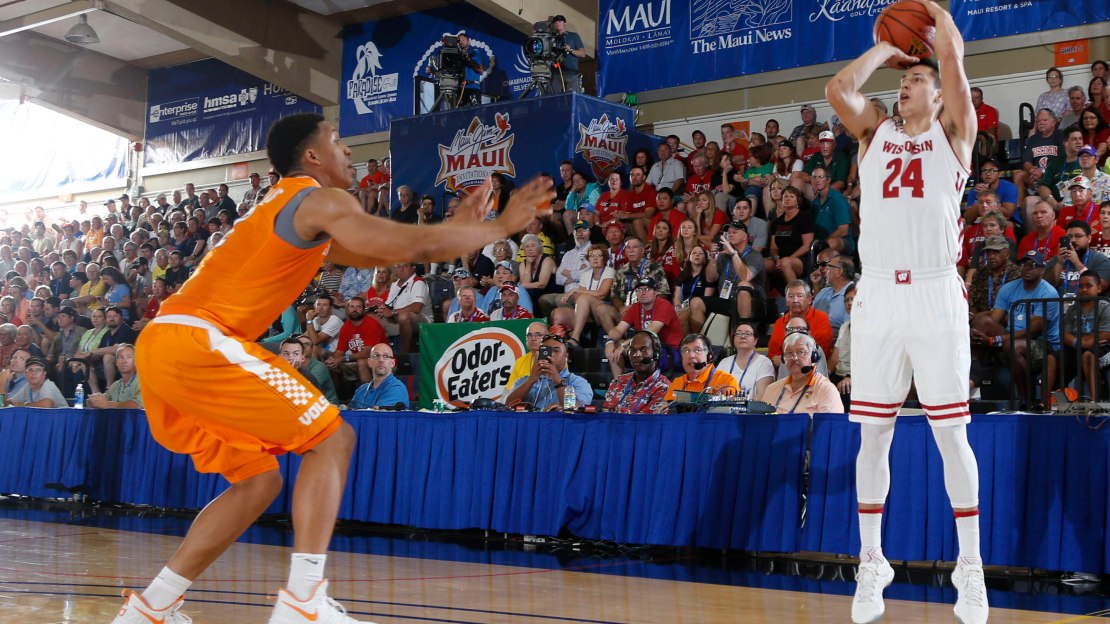 Last week I introduced the 3-pointer series, which will preview three Big Ten basketball games to watch each week this season.

The series debut got off to a slow start last week with Maryland's blowout of Illinois and a Hoosier drubbing at the hands of Louisville. But Minnesota and Purdue redeemed it with an overtime thriller and a Gopher upset Sunday.

Below are three games to watch this week.

There's no sugar-coating the fact that Indiana had a rough week. The Hoosiers let a struggling Nebraska team come into their house and steal a win Wednesday before shooting 32 percent from the Bankers Life Fieldhouse floor in Saturday's 77-62 loss to No. 6 Louisville. They also nearly dropped out of the Top 25, barely clinging to the No. 25 spot. Ouch.

It doesn't get any easier for Indiana as they welcome the No. 13 Badgers — who are riding an eight-game win streak — to Assembly Hall on Tuesday. The Hoosiers will offer a considerable step up in competition from what Wisconsin has seen since they lost to North Carolina over a month ago in Maui. The Badgers' two biggest wins during their ongoing streak came over Oklahoma and then-No. 22 Syracuse, and both looked better on paper a month ago than they do now. But I'm willing to bet that a win Tuesday at Indiana — which is tough to come by any time of year — will look even better on an NCAA resume a month down the road as opposed to right now, over a fringe Top-25 team in early January. The Hoosiers just have too much talent, and will probably get stronger as March gets closer.

Indiana is capable of beating anyone when their talent gels and the shots fall, and they should be playing angry at home following back-to-back losses. To win against Wisconsin they'll need to shoot much better from the field, which sounds simple but was a huge problem for them last week. Head coach Tom Crean also has to get his guys to put up more resistance on the defensive side than we saw last week. I get it, Indiana wants to get out and run the floor. But they made it way too easy for Nebraska and Louisville to do the same.

Getting their identity back against Wisconsin will be tough. The Badgers have built their program by controlling tempo and forcing opponents into submission, and this year is no different. Having cornerstone seniors with big-stage experience like Nigel Hayes and Bronson Koenig doesn't hurt.

We'll skip ahead to Sunday for the last couple of games. The final contest of the week on BTN features two NCAA tournament hopefuls in the Buckeyes and Gophers.

Ohio State entered the season with much more favorable projections than Minnesota, receiving a decent amount of votes in the preseason Top 25 polls. But the Buckeyes' play up to this point has created more questions than answers as they seem to play to the level of competition from night to night. This is a team that gave a Top 10 Virginia squad a serious scare on the road and fell to Florida Atlantic at home.

They have plenty of talent in guys like JaQuan Lyle, Jae'Sean Tate, Keita Bates-Diop and Trevor Thompson, but it's been a challenge to get them to play consistently as a cohesive unit. We'll see how they fare at The Barn.

Now it's Minnesota knocking on the door of the Top 25 rankings as the team receiving the most votes this week without getting a spot. There's no question that the Gophers are much-improved from last season, and their huge win at Mackey Arena completely legitimized their strong non-conference start. If they can keep stacking quality wins, we'll start talking about Minnesota's tournament seeding rather than which side of the bubble they'll fall on.

This matchup between the Badgers and Boilers is about as good as we're going to get this season, and Mackey should be rocking. Despite Purdue's stumble against Minnesota Sunday, I think these are the two best teams in the Big Ten right now. Neither team has a "bad loss," which is more than almost every other Big Ten contender can say at this point.

I can't wait to see how Wisconsin's Hayes and Ethan Happ handle Purdue's Caleb Swanigan and Isaac Haas in the post and vice-versa. Both squads have talented shooters in Koenig and Purdue's Dakota Mathias. Both have fantastic freshmen in Wisconsin's D'Mitrik Trice and Purdue's Carsen Edwards. And both have athleticism on the wing with Wisconsin's Khalil Iverson and Purdue's Vince Edwards. These teams are about as complete as can be and should be in the conference title race until the end.

With plenty of talent around him and a sweet stroke, @BadgerMBB's D'Mitrik Trice could be a huge x-factor come March. pic.twitter.com/b4bjoACEXm

This is the only time these squads will square up in the regular season, so catch Big Ten basketball at its best while you have the chance.