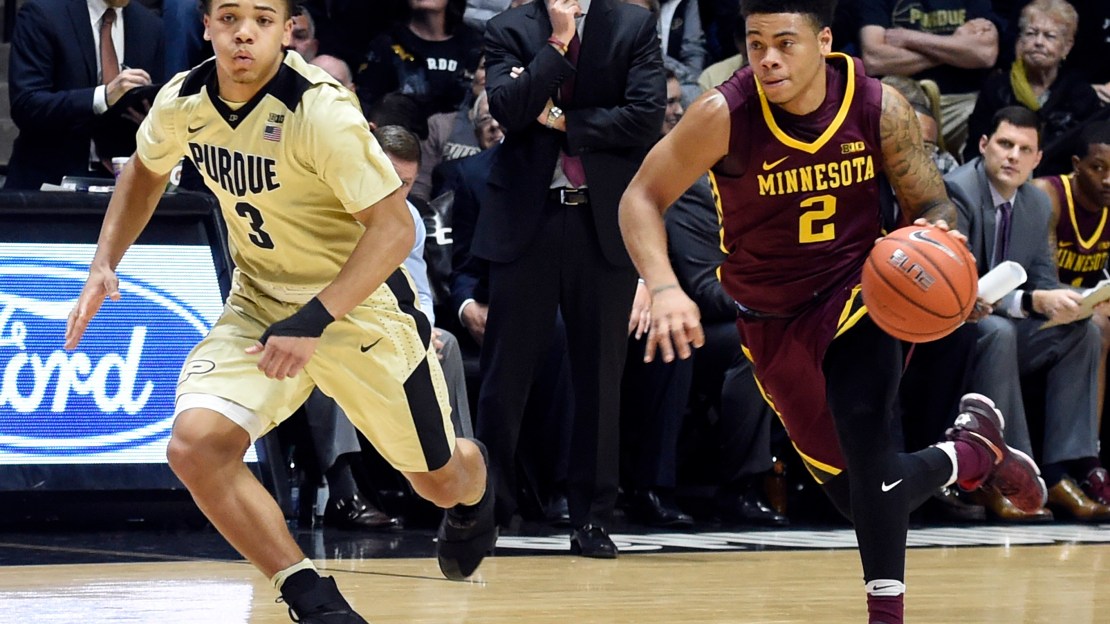 (AP) Nate Mason made sure it was a very special weekend in Indiana for the Pitino family – son Richard, who is the Minnesota coach, and father Rick, the Louisville coach.

Mason contributed 31 points, 11 assists and six rebounds on Sunday, and Minnesota pulled away in overtime for a 91-82 Big Ten victory against No, 15 Purdue in Mackey Arena.

On Saturday, Rick Pitino's No. 6 Cardinals dominated Indiana 77-62 in Bankers Life Fieldhouse. Rick was in the crowd Sunday to watch his son's team improve to 13-2, 1-1 in the Big Ten after struggling to an 8-23, 2-16 mark last season.

Louisville also defeated Purdue 71-64 on Nov. 30 in Louisville in the ACC/Big Ten Challenge.

But Sunday's game was all about Mason, who made 11 of 18 field goal attempts and 7 of 10 free throws.

"It was a big win," Mason said. "It means a lot, not only to me but to the young guys. We were just so excited to get the big win. Everybody was locked in, and everybody was focused. The rim got pretty big for me. I just kept shooting, and they just kept falling."

Richard Pitino was thrilled to complete the Pitino family sweep of the Boilermakers and Hoosiers.

"I think this is a great win," Richard Pitino said. "I don't know when the last time we won here. We deserved it, but we had to go out there and take it. It was great to play well right away and get our confidence going."

Eric Curry scored seven of his 10 in overtime for Minnesota. The teams traded baskets to begin the extra period before a Curry basket began an 11-0, victory-clinching run that snapped the Boilermakers' seven-game winning streak.

Minnesota overcame 28 points and 22 rebounds from Caleb Swanigan, but it wasn't enough to save the Boilermakers (12-3, 1-1).

Swanigan's layup with 4.6 seconds remaining in regulation tied the game at 73 and forced overtime. Dupree McBrayer's 3-point attempt for Minnesota at the buzzer bounced off the rim.

The Golden Gophers began the game by making their first eight shots and building a 17-4 lead, but Purdue rallied to lead 50-43 with 13:39 remaining. Mason scored 10 during the next three minutes, and it was back and forth the rest of the way.

"Minnesota did everything well early, and they got into a nice rhythm," Purdue coach Matt Painter said. "It felt like we were down 10 or 12 at the half, but we were fortunate to be down only (38-35). Their guards played well, but we made defensive mistakes as the game wore on."

Jordan Murphy added 16 points for Minnesota, which lost its Big Ten opener this past Tuesday night, 75-74 to Michigan State in overtime in Minneapolis. The Golden Gophers shot 49.3 percent (35 of 71), including 5 of 7 in overtime. They also scored 19 points as the result of 14 Boilermaker turnovers.

The Golden Gophers had lost eight in a row at Purdue and had not won in Mackey Arena since Feb. 26, 2005.

Minnesota: The Golden Gophers took complete advantage of their superior perimeter quickness and athleticism to pull away from what had been the Big Ten's hottest team. Murphy and fellow big man Reggie Lynch bottled up Purdue's 7-2 center Isaac Haas, who is the Boilermakers' second-leading scorer.

Purdue: While Swanigan was terrific with his sixth consecutive double-double, the Boilermakers are neither extremely athletic nor quick on the perimeter, and as it did in a loss to No. 1 Villanova, that element came back to haunt coach Matt Painter's team, which had no one to stop Mason.

Minnesota: After receiving votes in the most recent poll, don't be surprised if the Golden Gophers land in this week's Top 25 after snapping Purdue's seven-game winning streak and winning in West Lafayette for the first time in 12 years.

Purdue: With several teams in front of them losing this week, the Boilermakers appeared to be positioned to climb from No. 15, but giving up 91 points in a home loss likely ruined those chances.

Minnesota: The Golden Gophers travel to Northwestern on Thursday.

Purdue: The Boilermakers will play at Ohio State on Thursday.