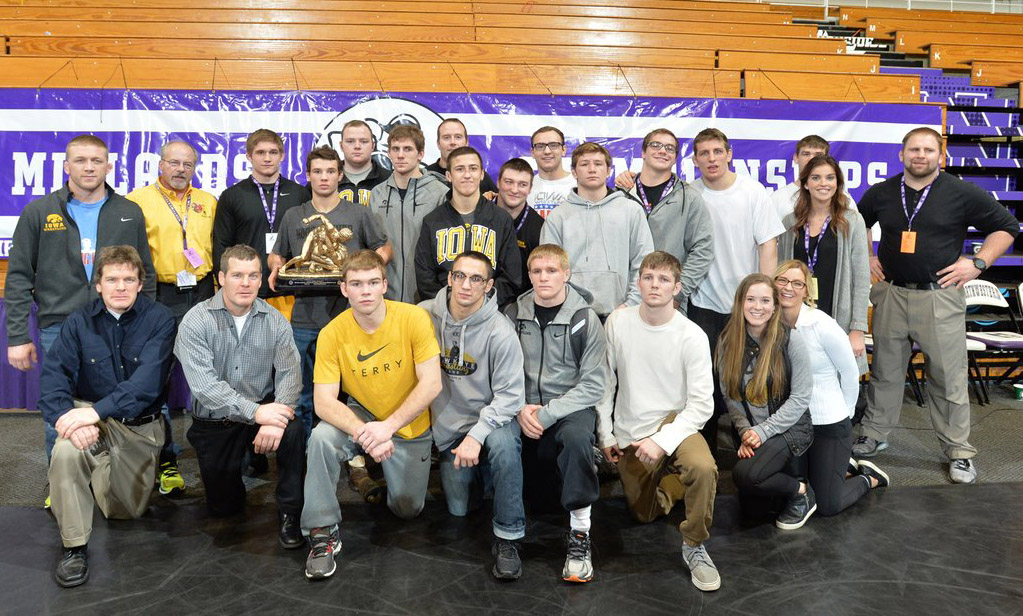 The University of Iowa wrestling team won three individual titles and scored a team total of 150.5 points to win the 54th annual Midlands Championships on Friday at Welsh-Ryan Arena.

Thomas Gilman (125), Brandon Sorensen (149), and Michael Kemerer (157) claimed Iowa's individual crowns, with Gilman and Sorensen defending their respective titles. Top-seeded Gilman took the 125 title for the third time in four years at the Midlands Championships. He won titles in 2013 and 2015, and finished second in 2014.

Gilman gathered his fifth bonus-point win of the tournament with a major decision over second-seeded Tim Lambert (Nebraska), 13-4, in the finals. He was voted "Champion of Champions" by his fellow first-place finishers and was awarded the "Dan Gable Most Outstanding Wrestler" of the weekend. Gilman closes the 54th Midlands Championships with an overall tournament record of 20-3.

Sorensen, seeded No. 1 at 149, earned his second consecutive Midlands championship after defeating the No. 2 seed Justin Oliver (Central Michigan) in sudden victory. At the end of regulation, the wrestlers were tied at one, but Sorensen put together a takedown and four-point nearfall sequence in overtime to defend his title.

Redshirt freshman Kemerer earned his title at 157 pounds in exciting fashion against top-seeded Tyler Berger (Nebraska). The wrestlers battled through two sudden victory overtimes, exchanging escapes and official reviews with Kemerer prevailing in a 6-5 decision. The No 2 seed tallied a 6-0 record in the tournament and improved on last year's fifth-place finish.

Kaleb Young, wrestling unattached, placed fifth in his Midlands debut with a 9-4 decision over Lorenzo De La Riva of CSU Bakersfield. Young went 5-2 at the tournament and is 19-5 overall this season.

Iowa returns to action Friday, Jan. 6 at Michigan. Action is set to begin at 6 p.m. (CT) in Ann Arbor.