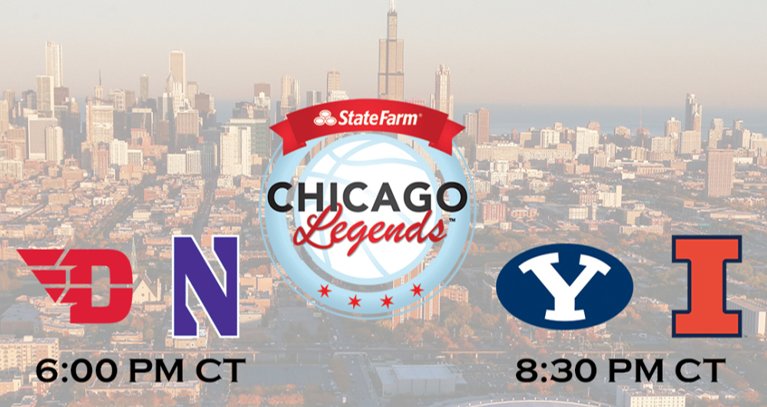 The inaugural State Farm Chicago Legends featured Northwestern and Illinois playing a doubleheader against quality non-conference opponents in Chicago Saturday at United Center. Both games featured the Big Ten squads jumping out to early leads and holding off comeback attempts in down-to-the-wire affairs.

Northwestern alum Craig Sager was Willie the Wildcat as an undergrad, and 2016 Willie honored Sager during the game with a replica of the jacket Sager wore at the 2016 ESPYs.

Northwestern got off to a very strong start against Dayton, jumping out to an 11-0 run against the Flyers.

Vic Law added some flash as the Wildcats padded their lead. The Cats held a commanding 40-17 lead at half, partly in thanks to a Dayton scoring drought that lasted over nine minutes.

Nathan Taphorn (11 points) added some sizzle for Northwestern in the second half, pulling the Steph Curry-style look-away as he released a 3-pointer.

Dayton stormed back in the second half, and Northwestern suffered a nine-minute drought of their own. But the Wildcats were able to hang on for the win, turning to Bryant McIntosh (13 points) in crunch time to help seal the 67-64 win to move to 9-2.

Illinois led by as many as 16 in the first half, in part because of this fortunate bounce on Michael Finke's 3-pointer. BYU stormed back and cut the halftime lead to 43-37.

The second half was tight, but Tracy Abrams did his best to keep BYU at arm's length with this ridiculous block at the rim.

Illinois had one final push in them to help seal the victory, getting back-to-back buckets from Maverick Morgan and Tracy Abrams.

.@IlliniMBB holds on to win against BYU!

These two B1G buckets down the stretch helped seal the victory. https://t.co/w0QFzvUw2b

BYU had a chance to win on a desperation heave at the buzzer, which came close to going in. Illinois escaped with a 75-73 victory for their fifth straight win to improve to 9-3.

BYU came THIS CLOSE to pulling off the comeback against @IlliniMBB, but the ?? held on for their fifth straight W. https://t.co/21xxOuBYAu

And least one couple apparently rooted for both Big Ten teams on the floor tonight, meaning they went home happy.