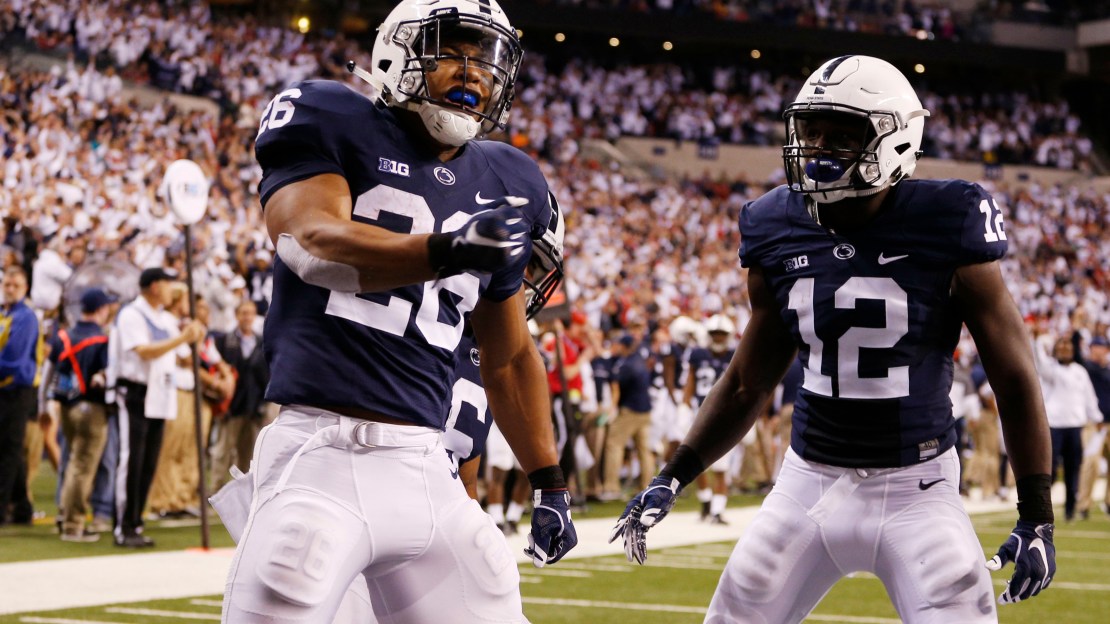 Now the East Division champs must wait to see if the selection committee rewards them with one of the four coveted playoff spots on Sunday.

If the committee was impressed with the turnaround, it just might give the Nittany Lions (11-2) a chance.

They trailed 28-7 with 5:15 left in the first half, but McSorley led Penn State to touchdowns on each of its next four possessions, finally taking a 35-31 lead on an 18-yard TD pass to Saquon Barkley with 13:41 left in the game. The Nittany Lions never trailed again.

Things looked bleak early, but McSorley repeatedly burned the nation's No. 3 defense with long passes on a record-breaking night.

McSorley finished 22 of 31 for 384 yards. The yardage and TD passes were both Big Ten championship game records. He also broke the school's single-season records for yards passing and touchdown passes.

And he wasn't the only one to have a memorable performance. Saeed Blacknall caught six passes, two for touchdowns, and finished with a championship-game record 155 yards.

Wisconsin (10-3) played without starting quarterback Alex Hornibrook but still jumped to a 28-7 lead behind Corey Clement, who ran 21 times for 164 yards including a 67-yard TD run in the first quarter.

But the Badgers' usually stout defense allowed a season-high point total and allowed the Nittany Lions to score on each of their last six possessions.

Their final chance ended when Clement was stopped short of a first down on fourth-and-1 from the Penn State 24-yard line with 1:01 to play.

Penn State: Consider the turnaround is complete. Five years after the Jerry Sandusky scandal tainted the program and the late Joe Paterno's legacy, and the ensuing NCAA sanctions seemed to put the Nittany Lions on the fast track to nowhere, they are Big Ten champs and look like a real national championship contender.

Wisconsin: After winning their first two title game appearances, the Badgers have now lost their two – in shocking fashion. Coach Paul Chryst never could have expected this from a defense that hadn't allowed more than 30 points all season and had only allowed No. 2 Ohio State to gain more than 400 yards in a game this year.

Penn State: Coach James Franklin insisted all week that his team was focused more on winning a Big Ten title. Now, the lobbying can begin – if Franklin wants to. The argument goes like this: Co-champs of the toughest division in college football, championship game winners of the best conference in football and the only team to beat No. 2 Ohio State. Will it be enough?

Wisconsin: In the first half, the Badgers looked like they would be making their case to the committee. Instead, the Badgers have no idea what will happen next. They should still wind up in a New Year's Day bowl game thanks to a schedule that included six games against top 10 teams and no losses to a team ranked lower than No. 8.

Penn State: Will eagerly wait to see who is next on the schedule.

Wisconsin: Will wait to see who they'll get in the postseason, one that could have been much more interesting had they protected their lead.