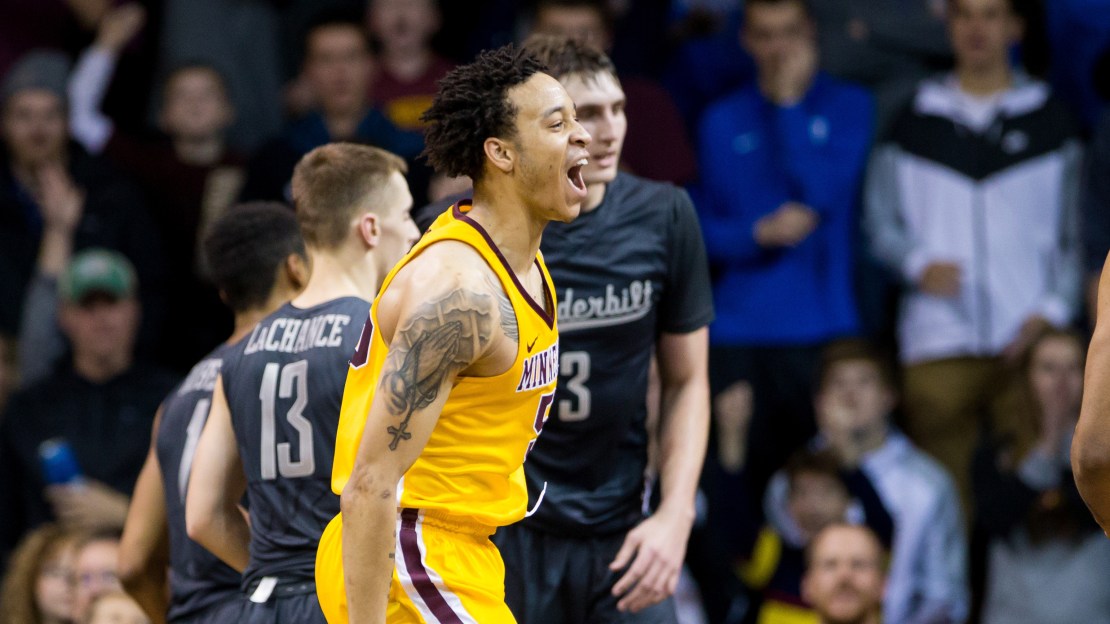 The Gophers (7-1) trailed 25-24 at halftime but used a 15-2 run to open the second half to build their biggest lead of the game at 39-27 in the neutral site matchup. Vanderbilt (4-4) responded with a 23-11 run over the next eight minutes to take a six point advantage before the Gophers pulled away late.

Jordan Murphy recorded his third double-double of the season with 16 points and 14 rebounds to lead Minnesota. He was 8-for-17 from the field and grabbed ten of his boards in the second half.

Vanderbilt's Jeff Roberson also recorded his third double-double of the season with 12 points and 16 rebounds. His three-pointer with 7:09 to play gave the Commodores a 45-44 lead, their first since the one-point edge at halftime.

Minnesota then outscored the Commodores 12-2 to seal it.

McBrayer fouled Vanderbilt's Nolan Cressler from outside the arc with 1:45 to play and the score tied at 50. Cressler made two of three from the line for a quick lead before the Gophers scored the final six.

After missing 10 of their first 11 shots, Minnesota didn't get their first bucket until the 14:57 mark when Jordan Murphy finally scored. Minnesota finished the night shooting 44.8 percent in the second half and 39 percent overall.

Bakary Konate's monster dunk with 12:16 to play sparked the Gophers to a 13-0 run in the opening half, giving Minnesota its first lead of the game at 15-14 when Dupree McBrayer scored.
All eight Minnesota players scored with Amir Coffey adding nine points and Bakary Konate grabbing seven rebounds.

Minnesota: The Gophers improved to 7-1 and have six straight games back in Minneapolis where they are 6-0 this season. The home stretch is capped by their Big Ten season opener on Dec. 27 vs. Michigan State.

Vanderbilt: The loss snaps a two-game win streak for the Commodores who made their first visit to South Dakota. They return home for two of their next three games.

Minnesota: The Gophers return home to Minneapolis to host the New Jersey Institute of Technology on Dec. 6. The Highlanders come to Minnesota the winners of two straight including its 75-74 victory on Saturday against UMASS Lowell.

Vanderbilt: The Commodores return home to Nashville to host High Point on Dec. 6.