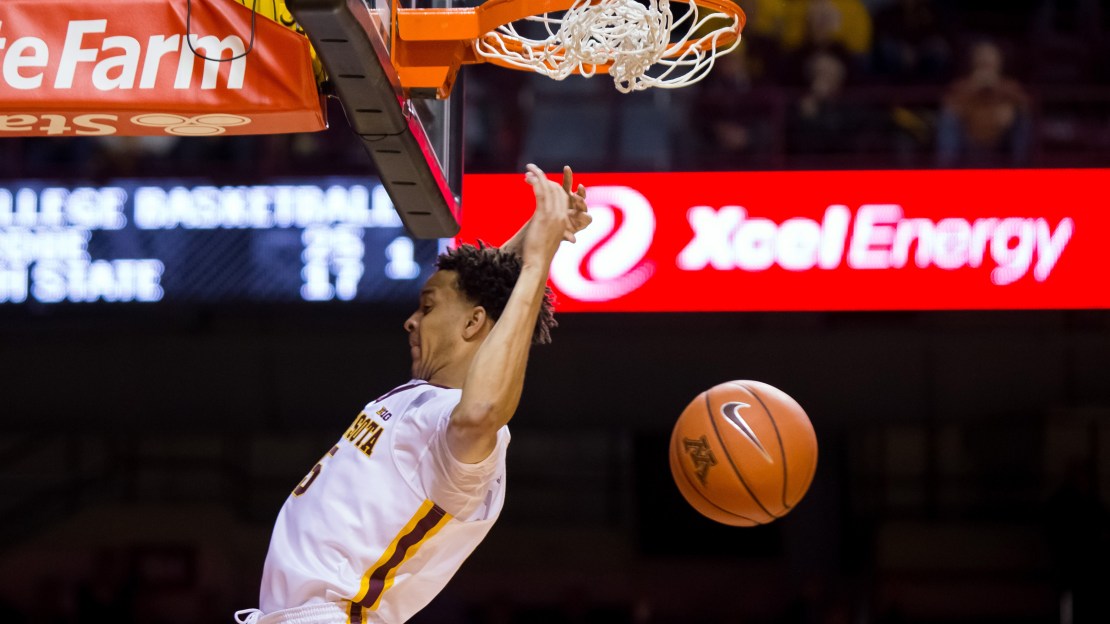 (AP) Amir Coffey scored all 19 of his points in the second half, after Akeem Springs made three 3-pointers over the final 5 minutes of the first half to finish with 11 points and help Minnesota pull away for an 85-71 victory over Arkansas on Tuesday night.

Nate Mason had 13 points and seven assists, Eric Curry made all eight of his free-throw attempts to score 12 points and Reggie Lynch and Jordan Murphy each added 10 points for the Gophers (5-0), who haven't won five straight games to start a season in three years.

Dusty Hannahs scored 20 points and Moses Kingsley had 10 points and 10 rebounds for the Razorbacks (3-1), whose first road trip of the season was rough. They didn't make a 3-pointer until Hannahs hit one at the 4-minute mark and finished 1 for 8 after entering the game 24 for 54 from behind the arc (44.9 percent).

Their 21 turnovers were their most since March 21, 2015, an NCAA tournament loss to North Carolina, and they had only six fast-break points after tallying 51 over the first three games. The Gophers had a 26-9 edge in points off turnovers.

The freshman Coffey had 30 points on Friday against St. John's and after a quiet first half got the crowd going with an array of fast-break dunks and slick layups plus a 3-pointer that gave the Gophers a 67-46 lead to match their largest of the game.

The Gophers started slowly, but the Razorbacks missed nine of their first 10 shots from the floor and were outscored 25-6 over a stretch of more than 10 minutes. Springs swished two more 3-pointers after that run in the closing minutes of the first half, and the Gophers led by at least 14 points for the rest of the game.

This was one of those games for the Gophers. Mason hit the backboard with an errant baseline jumper, but grabbed his own rebound off the ricochet and fired an overhead pass to Ahmad Gilbert on the opposite wing for a 3-pointer and a 58-40 lead.

HEY, WE PLAYED THEM TOO

Both Arkansas and Minnesota have already beaten Texas-Arlington, the team picked to win the Sun Belt Conference in a preseason coaches' poll. The Gophers beat the Mavericks 84-67 on Nov. 14, holding a 47-32 rebounding advantage and outscoring them 49-26 in the second half. The Razorbacks edged UTA 71-67 on Friday after overcoming a 17-point deficit in the first half.

Arkansas: A team packed with upperclassmen picked to finish fifth in the preseason SEC media poll that tapped Kingsley as the player of the year, the Razorbacks will need to make some significant improvements before a Dec. 17 game against No. 22 Texas.

Minnesota: With Springs, a senior and graduate transfer from Milwaukee, and Lynch, a junior and transfer from Illinois State who sat out last season per NCAA rule, the Gophers have injected an instant dose of experience in a team that finished 8-23 last season. Springs added three rebounds and three assists, and Lynch grabbed seven rebounds in 21 minutes.

Minnesota hosts Southern Illinois on Friday, before the first road game on Monday at Florida State in the ACC/Big Ten Challenge.