'The Game: 2006 … Remembered' tracks Ohio State-Michigan game for the ages 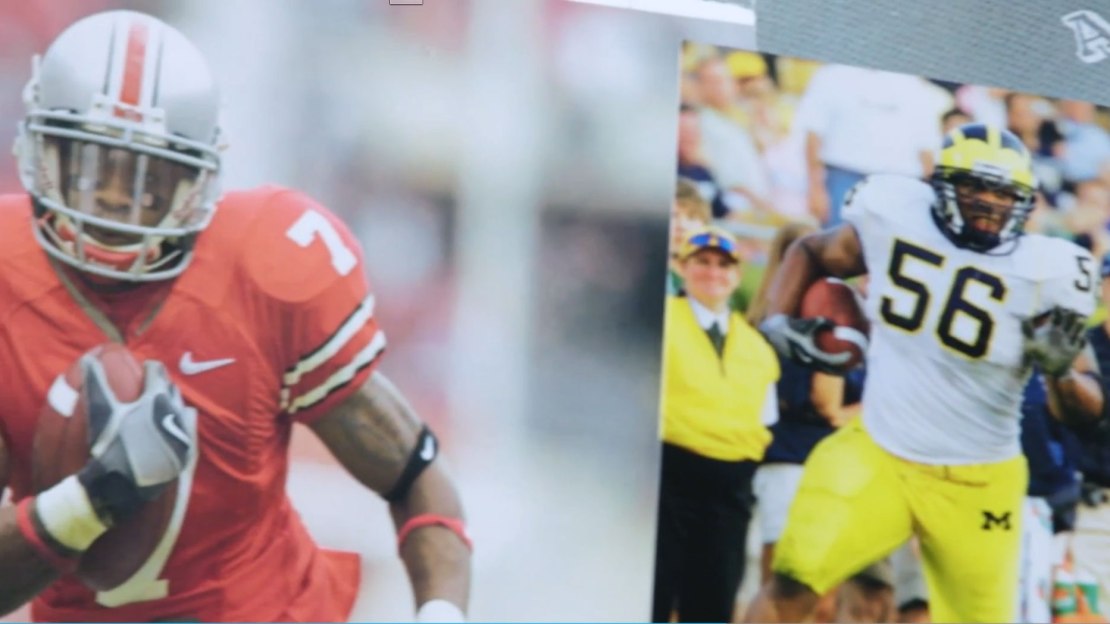 Marcus Freeman last played at Ohio State almost 10 years ago. But, to this day, he still can?t bring himself to say the ?M? word.

?Nope,? said Freeman, who played linebacker for the Buckeyes from 2004-08 and is the co-defensive coordinator and linebackers coach at Purdue. ?When you grow up in Ohio like I did (Huber Heights) and played for the Buckeyes, you can?t do it.?

Former Michigan coach Brady Hoke had his own twist on the lexicon of Wolverine-Buckeye feud, insisting on calling Ohio State ?Ohio.? But this blood battle goes well beyond mere words. Known simply as ?The Game,? Michigan-Ohio State has become a beacon on the college football calendar, a must-see grudge-match that may not always have national implications but provides intense passion.

But in 2006, 10 years ago, the Michigan-Ohio State tilt was the epicenter of the college football universe. It was No. 1 Ohio State vs. No. 2 Michigan, each sporting an 11-0 mark. At stake: bragging rights ? and almost assuredly a shot to play in the BCS title game.

?It was crazy, it was intense,? said Freeman. ?I am still asked about it to this day. The biggest game I ever played in.?

And a game no one ever will forget.

These rivals had played a lot of epic games with do-or-die implications. But the stakes in this one had even more of an edge. For the first time in this storied series, the teams entered the game atop the polls. It would be No. 1 Ohio State vs. No. 2 Michigan, each with a shining 11-0 record and each with national championship dreams dancing in their heads.

It was the first time since 1973–the Bo and Woody era–that both teams entered their rivalry with perfect records. Some were dubbing the November 18 clash in Columbus as the ?Game of the Century,? a moniker often tossed loosely about. But the heft of this game made that label seem apt.

Led by coach Jim Tressel, the Buckeyes began the 2006 season ranked atop the AP poll and remained there all season behind the play of quarterback Troy Smith. The Wolverines began the season ranked No. 14 and worked their way up the poll before settling at No. 2 through 11 games behind Lloyd Carr.

It was the first time in the then-BCS era that the BCS Nos. 1 and 2 teams squared off. And, some felt the schools should meet for the BCS national championship in January if the outcome of this game was close. More on that later.

So, that set the stage for arguably the most anticipated edition of the rivalry. If that wasn?t enough to carry the storyline, former Michigan icon Bo Schembechler died at age 77 on the eve of the game.

Prior to the game, a monitor played a video tribute to Schembechler. "Michigan has lost a coach and patriarch," the stadium announcer said. "The Big Ten has lost a legend and icon. Ohio State has lost an alumnus and friend."
"It was definitely difficult for us," said Wolverine QB Chad Henne at the time. "Coach Carr loves him dearly and so do we. … It's sad to see him go. We dearly miss him. We tried to fight for him today."

A sign in the stadium read: "Win it for Bo!? How would this dynamic impact the game?

Given the stakes and magnitude of the game, ABC moved kickoff from its traditional noon ET slot to a 3:30 p.m. ET start, with 105,708 fans stuffed in the Shoe. Few could have anticipated they were about to see the teams combine for 81 points and 900 yards in what typically is a black-and-blue game dominated by off-tackle runs and trap plays.

The contest turned out to be an offensive display, with each team setting the tone early by scoring a touchdown on their opening possession. Michigan marched right down the field and scored on a one-yard run by Mike Hart. Ohio State responded, moving rapidly through the air and hitting pay dirt with Troy Smith connecting with Roy Hall for a score. That would be all the scoring in the opening stanza, but things were just getting warmed up.

Ohio State grabbed its first lead when Chris Wells bolted 52 yards for a touchdown to give OSU a 14-7 lead. The Buckeyes made it 21-7 on a 39-yard scoring strike from Smith to Ted Ginn, Jr. The Wolverines answered with Chad Henne connecting with Adrian Arrington on a 37-yard score to make it 21-14 OSU. But the Buckeyes responded with Smith and Anthony Gonzalez hooking up for an eight-yard scoring pass to give Ohio State a 28-14 lead at intermission. And Michigan kept chipping back.

? Michigan struck first in the third quarter with Hart scoring on a two-yard run to make it 28-21, Ohio State.
? The Wolverines subsequently added a 39-yard Garrett Rivas field goal to cut the Buckeyes? edge to 28-24.
? Ohio State pushed its cushion to 35-24 when Antonio Pittman ran 56 yards for a touchdown.

So, the stage was set for a classic fourth quarter, 15 minutes of college football glory that forever will live in the lore of this great rivalry.

On just the second play of the fourth quarter, Michigan hit the end zone with Hart scoring from two yards out to make it 35-31, Ohio State. The Buckeyes got some breathing room when Smith hit Brian Robiske with a 13-yard touchdown pass to push the OSU lead to 42-31. But Michigan wasn?t done, as Henne drove his club to another score, hitting Tyler Ecker with a 16-yard touchdown pass. A successful two-point conversion cut the Buckeye lead to 42-39 with 2:16 to play. The Wolverines tried an onside kick, but Ohio State?s Ginn recovered and the Buckeyes ran out the clock to take the victory.

"There were a lot of good playmakers out there today," Tressel said in the aftermath. "It was a fast-break game the whole way."

A slugfest, to be exact.

"If this was boxing they'd definitely get a rematch," Ohio State defensive back Brandon Mitchell said in the postgame.

Mitchell?s sentiment was shared by others. But, alas, America would get no sequel in January in the BCS title game.

After the game, Ohio State and Michigan remained 1-2 in the BCS standings. Their seasons were over. But other games remained to be played across the nation. The next week, BCS No. 3 USC beat Notre Dame and moved into the No. 2 spot in the BCS standings. Then, in the final week of the season, BCS No. 4 Florida toppled Arkansas in the SEC title game and USC beat UCLA. And when the final BCS standings were released on December 3, Ohio State remained No. 1 ? but Florida had moved to No. 2 with Michigan at No. 3 just .0101 points behind the Gators.

So, it would be Ohio State vs. Florida, which was led by Urban Meyer, in the BCS title game to be played in Glendale, Ariz. The Wolverines would have to settle for a trip to the Rose Bowl to take on USC.

Neither Ohio State nor Michigan would end the season on high note. The Buckeyes lost to the Gators, 41-14, while the Wolverines fell to the Trojans, 32-18. But the postseason results did nothing to take the hue off the Titanic Ohio State-Michigan game of 2006.

"The national championship was something aside, was something different from this," said Troy Smith, who would win the 2006 Heisman Trophy. "This is The Ohio State University-Michigan game. It's the biggest game in college football. And today the best team won."

And it was a game we never will forget.