Dienhart: No. 2 Ohio State survives and advances at Michigan State 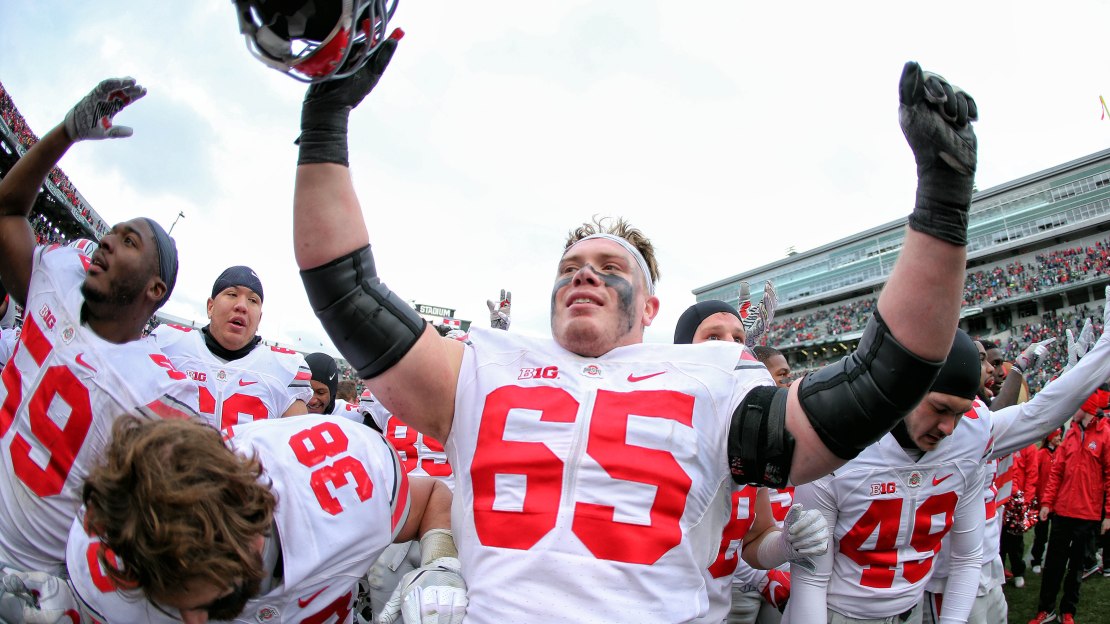 It?s all about surviving and advancing in November. And that?s exactly what Ohio State did Saturday at Michigan State.

"I think they're tough and they shot everything at us today," Ohio State coach Urban Meyer said.

The Buckeyes? 17-16 win in Spartan Stadium made the Buckeyes 10-1 overall and 7-1 in the Big Ten. And it should ensure that Ohio State remains among the top four teams in next week?s College Football Playoff poll.

Last week, Ohio State was No. 2 coming off back-to-back 62-3 wins. The Buckeyes are perhaps positioned to secure a playoff berth ? even without winning the East Division.

Ohio State still can win the East, get to the Big Ten title game and win it, which would seemingly make it a cinch to earn a playoff spot. But in its current situation, Ohio State?s fate is out of its control.

First, the Buckeyes must topple Michigan, which visits Columbus next week. Gotta like Ohio State?s chances, as the Buckeyes have dominated this series of late, going 12-2 since 2001 and winning the last four meetings with a 42-13 triumph last season. The last time Michigan won in Columbus? In 2000, when the Wolverines took a 38-26 decision. Plus, Michigan's offense is not clicking.

Second, Ohio State also will need Penn State to lose, since the Nittany Lions hold the tiebreak vs. the Buckeyes courtesy of their win vs. Ohio State earlier this season. Penn State plays at Rutgers tonight and finishes next week at home vs. the same pesky Michigan State team that almost beat the Buckeyes today.

On this day, Ohio State rode its stellar pass defense to victory. Tyler O'Connor and Damion Terry were a combined 8 of 21 for 127 yards with two interceptions for the Spartans. Yes, MSU ran for 207 yards, with LJ Scott ambling for 160 yards on 19 carries with a TD, but the Buckeyes essentially dared Michigan State to pass the ball to beat them ? and the Spartans couldn?t.

The defense was never bigger than in the fourth quarter when Michigan State scored on a one-yard TD run by Scott with 4:41 left in the game to cut Ohio State?s lead to 17-16. Instead of kicking a potential game-tying extra point, the Spartans opted to go for two ? and the Buckeyes snuffed it out by intercepting an O?Connor pass. Michigan State boss Mark Dantonio said afterward that he'd planned all week to go for two points if a situation like that came up.

"They had us covered up on that particular play," Dantonio said. "So good job by them."

Ohio State?s defense wasn?t done yet. After Michigan State got the ball back one last time to attempt to win the game, the Buckeyes notched a sack and then a game-sealing interception by Gareon Conley

The Buckeyes mustered just enough offense, led by J.T. Barrett. The quarterback carried a huge load, carrying a game-high 24 times for 105 yards to make up for his 10-of-22 passing for 86 yards and a TD. Buckeye back Mike Weber added 111 yards rushing with a TD, joining Robert Smith and Maurice Clarett as the only Ohio State freshmen to run for over 1,000 yards.

Ohio State owed one to Michigan State. Remember, the Spartans beat Ohio State in the 2013 Big Ten title game and again late in the regular season last year to ruin the Buckeyes? hopes of repeating as national champions.

Now, could a one-loss Ohio State that doesn?t win the Big Ten earn one of the four coveted playoff slot? Remember: The playoff committee thinks winning your conference championship is a big criterion. Still, even without a league title, the Buckeyes would have an impressive resume that would stack up with most teams in the nation.

– 11-1 record
– Wins at Oklahoma, at Wisconsin and vs. Michigan
– Lone loss at Penn State

No doubt, the SEC champ and Big Ten champ look like locks to earn playoff spots. And a third spot figures to go to Clemson, which is on course to win the ACC. The fourth spot could come down to Ohio State and Washington (likely Pac-12 champ) and Oklahoma (likely Big 12 champ).

?Well they don't want to hear it from us but they don't live in a cocoon either, so they hear it from the media, ESPN, and all that,? said Meyer of playoff talk. ?I'm glad we're here. I don't know if I'll talk to it there, I didn't talk about it here, we enjoyed a win.

"We're going to go home, enjoy the win and wait for assignment tomorrow and I'll probably address it at some point."

There still is plenty of football to be played between now and when the final CFP rankings comes out. But Ohio State may be positioning itself well to earn a playoff spot even if it doesn?t win the East. But for now for Ohio State, its focus is on Michigan.

?It is rivalry week, but we are going to enjoy this,? said Ohio State linebacker Chris Worley. ?Take nothing away from them. That's a College Football Playoff team right there and we knew it was going to be a dog fight. Coming around this time of the year, November, wins are hard to come by so we'll take any win any way we can. We watched them on film all week and they didn't look like a 3-7 team, at least offensively.?

It?s going to be very interesting to see how this all shakes out.