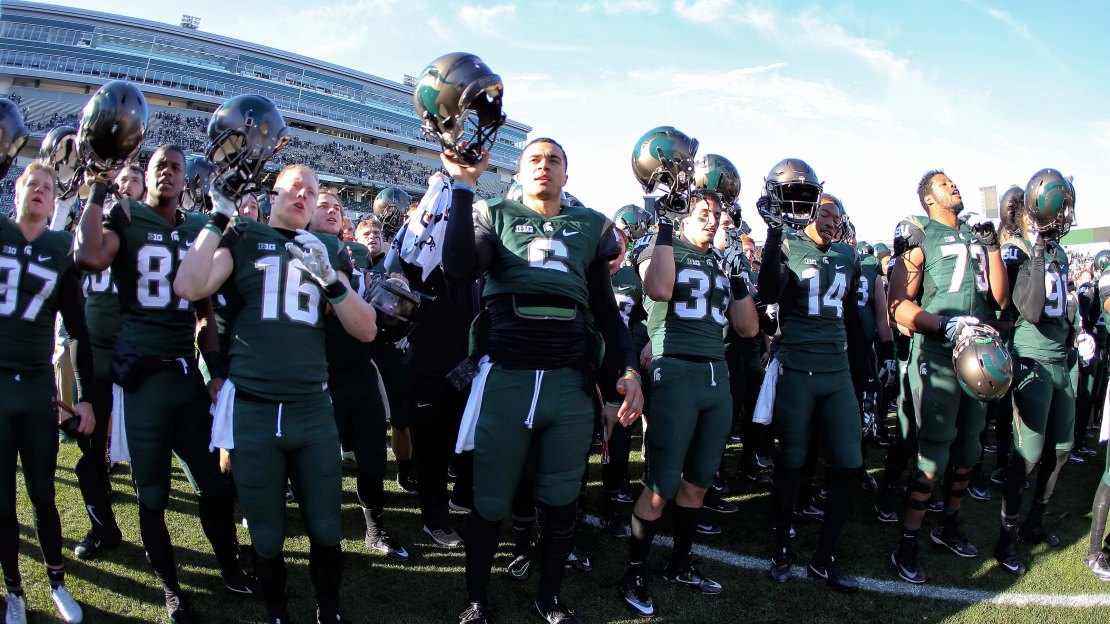 (AP) It had been nearly two months since Michigan State won a game, so coach Mark Dantonio and the Spartans were happy to celebrate this victory.

Even if this was merely a matchup to see who could climb out of last place.

Tyler O'Connor threw three touchdown passes in the first half, and Michigan State snapped its seven-game losing streak with a 49-0 rout of Rutgers on Saturday in what was a matchup of the last two teams in the Big Ten without a conference win.

"We sort of climbed out under a rock a little bit," Dantonio said. "You'd have thought we won the championship in that locker room. It's been a long time."

Rutgers never made it farther than the Michigan State 27-yard line – and on that drive in the second quarter, the Scarlet Knights ended up punting from the 30. The Spartans drove 92 yards the other way and took a 28-0 lead on a 4-yard touchdown pass from O'Connor to Josiah Price.

Price caught two touchdown passes, including a 2-yarder that opened the scoring in the first quarter. Cox made it 14-0 with a 30-yard interception return, and O'Connor added a 50-yard touchdown pass to Trishton Jackson later in the first.

"We got dominated from the start to the finish up front on both sides of the ball," Rutgers coach Chris Ash said.

Rutgers: This was a matchup of two teams at the bottom of the Big Ten, but it didn't look like they were on the same level. This was an obvious setback for the Scarlet Knights, who had been more competitive lately in losses to Minnesota and Indiana.

Michigan State: There's nothing the Spartans can do now to make up for the horrendous losing streak that derailed their season, but this was about as emphatic as a victory can get. Michigan State outgained Rutgers 440-149 – and did it without injured defensive lineman Malik McDowell .

There were plenty of empty seats at kickoff, but the turnout ended up being fairly good considering the circumstances. Attendance was announced at 73,701, and both Dantonio and O'Connor made a point of expressing their appreciation afterward.

"The fans that supported us today – it was awesome to still see that many people pack Spartan Stadium," O'Connor said. "We're playing for people like that."

Michigan State freshman Donnie Corley had two catches for 18 yards and also played some on defense. He made two tackles.

Michigan State had a chance to substitute liberally late in the game, and that led to an unusual call in the second half. Running back Delton Williams and wide receiver Paul Andrie were in the game at the same time, but they both wear No. 22.

The Spartans were penalized 5 yards.

Ash said he was disappointed that his team lost focus at times. Quarterback Giovanni Rescigno elaborated.

"Some of the guys were jawing with their guys," Rescigno said. "Coach talks to us all the time about, you've got to stay focused, stay focused on the task at hand and in what we're doing."

Michigan State: The Spartans host No. 6 Ohio State. The Buckeyes will be out to avenge an upset loss to Michigan State last year that kept Ohio State out of the national title hunt.