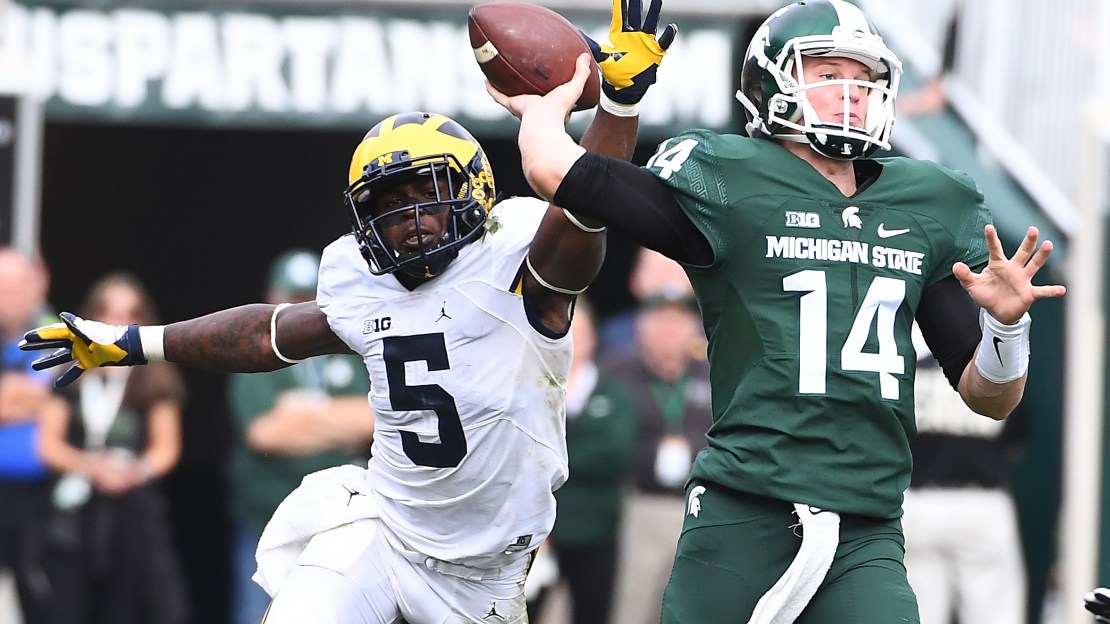 Doing a little thinking out loud as the games of Week 11 quickly approach. Could Minnesota make the playoff? How good is Michigan quarterback Wilton Speight? And does any team have a more critical three-game finish than Nebraska? I look at all of that and more.

Don?t count out Minnesota in the Big Ten West. Remember: The Golden Gophers control their own destiny. Win out, and Minnesota will take the West division and play for the Big Ten championship in Indianapolis. If they win that, would the Gophers earn a playoff spot? Minnesota would be 11-2 with victories vs. Nebraska, Wisconsin and the Big Ten East champ. Not a bad resume.

Speaking of Minnesota, it has one of the most daunting schedules down the stretch of any Big Ten team. The Golden Gophers must play at Nebraska, vs. Northwestern and at Wisconsin. The combined record of those teams: 18-9 overall and 11-7 in the Big Ten. If Minnesota is going to win the West, it will have to earn it.

Can Michigan QB Wilton Speight ease into the Heisman race? Perhaps. Most Big Ten Heisman talk centers around Ohio State quarterback J.T. Barrett, Penn State running back Saquon Barkley and Wolverine jack-of-all-trades Jabrill Peppers. But Speight seems to be gaining steam. In fact, I think he?s the best quarterback in the Big Ten. Yes, better than Barrett. Speight?s numbers are impressive. He is No. 1 in the Big Ten in passing efficiency, hitting 64.5 percent of his attempts for 2,053 yards with 15 touchdowns and just three interceptions. Best of all, Speight has Michigan 9-0 and poised to maybe earn a playoff bid.

What is at the root of Michigan State?s collapse? They went from a glistening 12-2 mark, Big Ten title and playoff appearance in 2015 to a 2-7 heap this season as the Spartans continue to search for a Big Ten victory? The most telling problem is a lack of smart, disciplined play-two traditional hallmarks of Mark Dantonio teams that are lacking. Check this out: MSU is the most penalized team in the Big Ten (62 for 601 yards, 66.8 per game). And it also is second-to-last in turnover margin (minus five). Add it all up, and the Spartans will go bowl-less for the first time since a three-year drought from 2004-06 under John L. Smith.

Purdue's search for a coach is well under way. Ideally, the school will land a coach soon after the regular-season finale vs. Indiana on Nov. 26. Will that happen? GoldandBlack.com has reported that Purdue has hired search firm DHR International. Who will the Boilermakers hire? It?s anybody?s guess at this point, with names still ranging from Western Michigan?s P.J. Fleck, to Louisiana Tech?s Skip Holtz, to Wake Forest?s Dave Clawson. And there even are eyebrow-raisers like Youngstown State?s Bo Pelini and Alabama OC Lane Kiffin. I think this is a job for a proven head coach who is on the way up, hungry and has an offensive background. Retread head coaches who would be "taking a step down" by coming from more prestigious places? I think that would be a recipe for failure.

Perhaps no school has more on the line from a perception standpoint the last three weeks than Nebraska. The Cornhuskers began the season 7-0. But they have lost two in row, falling at Wisconsin and at Ohio State. Up next is a visit from Minnesota, which won the last time it visited Lincoln and is 2-1 in the last three vs. Nebraska. Then comes a visit from Maryland. And the season ends with a visit from Iowa, which has won the last two games at Nebraska. Can NU win out and go 10-2? To go 2-1 to finish with a 9-3 mark would be a nice rebound from the 6-7 record in Mike Riley?s debut. An 8-4 record?

Keep an eye on Penn State offensive coordinator Joe Moorhead. He could become a head coaching commodity in the offseason. Moorhead has done great work in his first season in State College, transforming the Nittany Lions attack with a quick-paced spread attack after a successful run as head coach at Fordham. Last year, PSU averaged 23.2 points and 348.6 yards per game. This season with Moorhead running the attack, the Nittany Lions are averaging 34.4 points and 415.0 yards per game. Best of all, Penn State is 7-2 overall and 5-1 in the Big Ten a year after going 7-6 overall and 4-4 in the Big Ten.

So, which division is stronger this season? The East or the West? Through 10 weeks, the teams have played 18 games. And they have split them, going 9-9. The most intriguing inter-divisional game left: Michigan at Iowa this Saturday. Ohio State and Penn State went 3-0 vs. the West.

I?ve said it before, and I?ll say it again: I think two-win loss Wisconsin will get a playoff bid if it wins the Big Ten. The same goes for two-loss Auburn. They are ranked seventh and ninth, respectively, in the latest College Football Playoff poll and if each team wins out, they would win their division and conference championships, which would also result in getting a Top 10 win. Both would have strong resumes with plenty of quality wins on top of being champ of a strong league.