'Outstanding' Wilton Speight getting it done for No. 3 Michigan 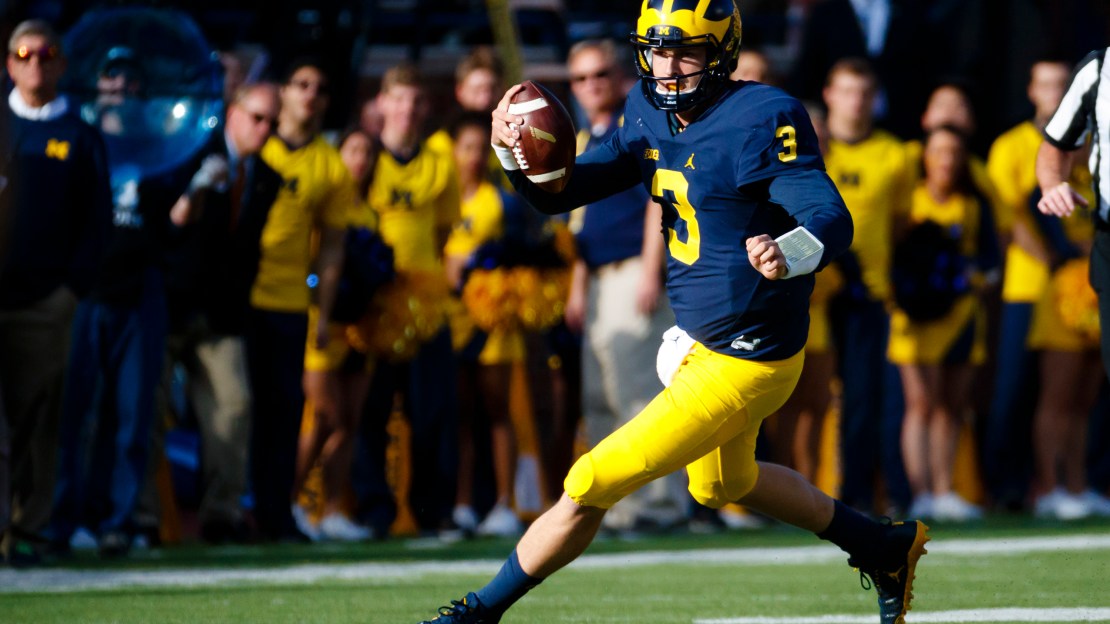 (AP) The quarterback position was a big mystery when Michigan commenced preparations for this football season.

It is now one of the team's biggest strengths thanks to the stellar play of sophomore Wilton Speight.

The 6-foot-6 Speight outlasted Houston transfer John O'Korn in a competition that began in the spring and continued through late August.

Once he landed the gig, Speight responded with consistently good play, topped by last Saturday's 362-yard passing effort against Maryland.

"He's superseded the hopes, he's gone past what we were hoping he'd be — in a big way," coach Jim Harbaugh said in a press conference. "He's been outstanding. Outstanding. I'd be lying if I said he hasn't done more than what we hoped he'd be this season.

"He's met the challenge at every pass. He's acquitted himself more than good. He's got a hot hand and it's come through preparation and it's been really important to him. And that's really why you don't put expectations on people and you don't limit what you think they can be."

Ironically, Speight considered transferring prior to Harbaugh's first season after being berated by coach in the spring of 2015.

The segment aired in an HBO special. Speight's face and jersey number were blocked out but there was no denying that a really tall quarterback was told the following:

"If you want to look at me with that look, go (expletive) somewhere else," Harbaugh barked.

Speight and his family investigated leaving before he decided to remain with the Wolverines.

"That redshirt freshman fall camp, I was on the phone with my parents basically, 'OK, I'm out, let's find a different school.' They were on board. They obviously wanted me to stay here, but they were going to support my decision."

Things are working out well now for Speight and Michigan and he enters the game against the Hawkeyes with 2,053 yards and 15 touchdowns against three interceptions.

He will look for more production against an Iowa squad that is reeling after being pounded 41-14 by Penn State last Saturday.

The loss was the second straight for the Hawkeyes and a humbling one for coach Kirk Ferentz.

"We got hit right on the chin," Ferentz said in a press conference. "The whole challenge is to get back up on your feet and go back to work. We have to do it this week because the team we play is going to be a big challenge for us."

Iowa is just one game off the pace in the Big Ten West despite its recent struggles. An offense that has topped 40 points on three occasions has suddenly gone dormant and combined for just 23 points in the two defeats.

Senior quarterback C.J. Beathard has passed for fewer than 200 yards in six of nine games. His 204-yard effort against Penn State matched his second-best output of a season in which he has thrown for 1,584 yards and 13 touchdowns against five interceptions.

The sharing of backfield duties by junior Akrum Wadley and senior LeShun Daniels has been a strength. Wadley has rushed for 664 yards and eight touchdowns and Daniels has 642 yards and six scores.

"I think you try to keep people motivated, coming in every day and giving it their all," Jewell said in response to a question about a possible leadership void. "That's what we have to focus on now."

Michigan's defense has had few issues all season long as the unit leads the nation in scoring defense (10.7 points per game), total defense (246.3), passing defense (138.9) and third-down conversion defense (19.0).

Sophomore outside linebacker Jabrill Peppers has fueled the success with a team-best 13 1/2 tackles for losses. Senior middle linebacker Ben Gedeon has been consistent all season and has a team-high 74 tackles while senior cornerback Jourdan Lewis (two interceptions) is in top form after early season injury issues.

An offensive player performing well is senior tight end Jake Butt, who became the school's all-time leader for receiving yards (1,521) by a tight end in last Saturday's 59-3 trouncing of Maryland.

The Wolverines have lost in each of their last three visits to Iowa so nobody is taking the Hawkeyes lightly.

"Iowa, this is a championship (game), and we take that to heart," Speight said. "We know it's win or go home. All this means nothing if we're 9-1 this time next week."