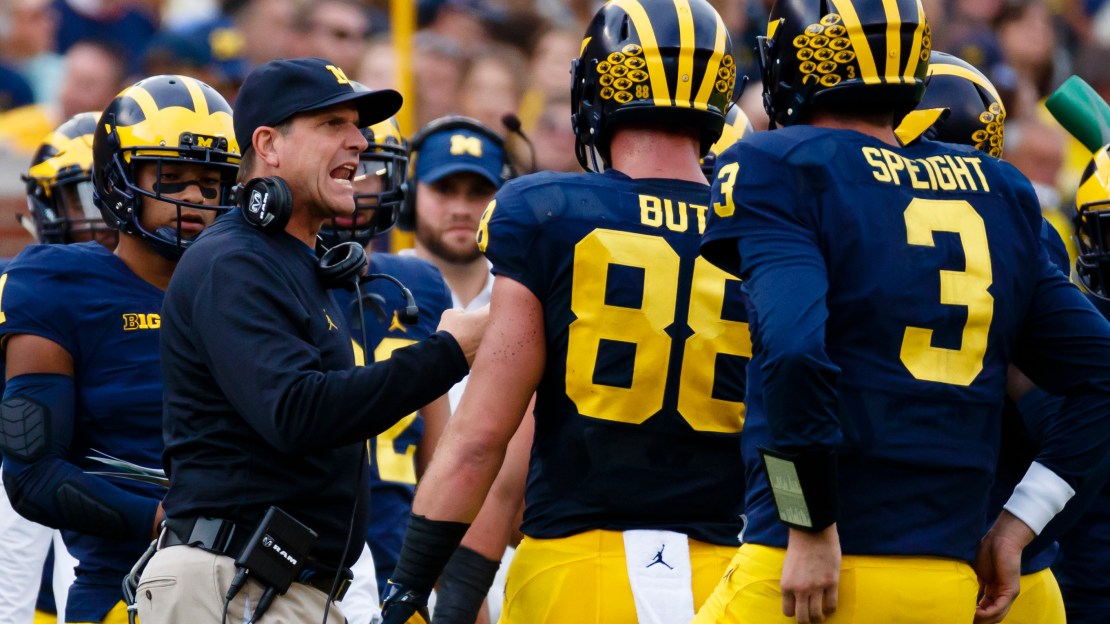 This was the first full weekend of all Big Ten action. And big games dotted the map, including two OT tilts. None was bigger than Michigan?s win over Wisconsin to move to 5-0. And it looks like Nebraska may be the team to beat in the Big Ten West with Iowa, Wisconsin and Minnesota all losing.

Biggest surprise: It was shocking to see 1-3 Northwestern travel to Iowa and take a 38-31 decision. It was the second home loss of the season for the Hawkeyes, who are struggling in the trenches. This may have been a season-saving win for Northwestern.

Biggest disappointment: Iowa. The Hawkeyes were the pick of most to win the West. But Iowa may be hard-pressed to fulfill those expectations. The Hawkeyes were dumped at home by Northwestern, 38-30. Earlier this year, Iowa fell at home to FCS North Dakota State, and it barely won at Rutgers last week, 14-7. Honorable mention to Michigan State in this category, which fell in OT at Indiana. The Spartans have lost back-to-back games for the first time since 2012. The defending Big Ten champs are 0-2 in the league and no longer control their own destiny, falling two games behind Ohio State, Michigan and Maryland in the East.

Never play this again: The Rutgers at Ohio State game was on the schedule ? so it had to be played. And, the result was predictable, as the Buckeyes slammed the Scarlet Knights, 58-0. And, it really wasn?t that close, as OSU raced to a 30-0 halftime lead and never looked back.

Best play: Certainly none was bigger than Michigan?s Wilton Speight?s 46-yard hook up with Amara Darboh for the tie-breaking and game-winning TD with 1:53 left in a 14-7 triumph vs. then-No. 8 Wisconsin.

Best moment: Before the game, Illinois presented Nebraska with a signed No. 27 Illinois jersey in honor of fallen Cornhusker punter Sam Foltz. A very classy move by the Fighting Illini.

Did you see that? Clinging to a 14-7 lead late with less than three minutes left in the fourth quarter, Michigan needed to make one more stop to ice Wisconsin. The Badgers faced a 4th-and-10 from deep in their own territory as QB Alex Hornibrook dropped to pass. That?s when Wolverine CB Jourdan Lewis leaped and made a stupefying one-handed interception to snuff out Wisconsin and remain unbeaten. This was Michigan?s first win vs. a top 10 team since 2008.

Offensive Player of the Week: Penn State QB Trace McSorley did it all in a 29-26 OT win vs. Minnesota. He hit 19-of-40 passes for 335 yards with a touchdown. He also ran eight times for a team-high 73 yards and a TD.

Defensive Player of the Week: Northwestern DE Ifeadi Odenigbo had a game for the ages, notching four of NU?s six sacks vs. Iowa. And as Iowa was driving for a tying TD late, Odenigbo forced C.J. Beathard out of the pocket and into a hasty throw that resulted in an interception. Odenigbo was a dominate force off the edge, showing why so many people have been excited about his potential for years.

Special Teams Player of the Week: Iowa?s Desmond King ran back four punts for 77 yards with a 32-yard run back, and three kickoffs for 85 yards with a 37-yard return.

Penn State. Coming off a 49-10 beat down at Michigan, the Nittany Lions rallied for 29-26 OT home win vs. Minnesota despite dealing with attrition in the linebacking corps. Now, a visit from unbeaten Maryland looms, a team James Franklin once was a head-coach-in-waiting for.

Indiana. For the first time since 2006, the Hoosiers won the Old Brass Spittoon from Michigan State a week after losing at home to Wake Forest. This may be a program-transforming win for Indiana-or not. Either way, the IU defense is showing signs of life-and that?s a good thing. The offense did its part in a 24-21 OT win, as WR Ricky Jones had five catches for 124 yards and a TD. IU has both the Old Oaken Bucket and Old Brass Spittoon for the first time since 2001.

Michigan. The Wolverines moved to 5-0 with a gritty 14-7 home win vs. Wisconsin. The Wolverines didn?t tally the go-ahead points until the fourth quarter, when Wilton Speight hit Amara Darboh with a 46-yard touchdown pass. It was the first loss of the season for the Badgers.

Northwestern. The Wildcats had the dubious distinction of being the most disappointing team in the Big Ten so far in 2016, opening 1-3 with home losses to a MAC and FCS school after a 10-win season in 2015. But NU may have saved its season with a monster 38-30 win at Iowa, the Wildcats? first in Kinnick Stadium since 2009.

Ohio State. Will anyone beat the 4-0 Buckeyes? They looked unbeatable in a 58-0 win vs. Rutgers, outgaining the Scarlet Knights, 669-116. Perhaps the most amazing stat: RU had just 33 yards passing. And it never penetrated deeper than the Buckeye 38-yard line.

Maryland. Don?t look now, but the Terrapins are 4-0 after demolishing Purdue, 50-7, on Homecoming after building a 29-0 halftime edge. The Terrapins trampled the Boilermakers for 400 yards rushing, averaging 8.7 yards per carry. Up next, Maryland plays at Penn State before coming home to play Minnesota. This ride may not be ending anytime soon for the Terps.

Iowa. The Hawkeyes status as favorites in the Big Ten West is over after a 38-30 home loss to a Northwestern club that entered the day 1-3 and last in the league in scoring (16.3 ppg). Iowa?s offense has its usual issue of struggling to make explosive plays. But the biggest issue is the 2-2 Hawkeyes? struggled on the line of scrimmage on both sides of the ball. Up next: a trip to Minnesota.

Rutgers. The Scarlet Knights almost beat Iowa last week, falling 14-7. This week, Rutgers was eviscerated to the tune of 58-0 at Ohio State, notching only 116 yards. Up next: A visit from Michigan. RU QB Chris Laviano hit 3-of-12 passes for 33 yards.

Michigan State. The Spartans now have the title of ?most disappointing team in the Big Ten? after falling in overtime at Indiana. The Hoosiers had missed a game-winning field goal in OT. But a penalty on MSU allowed IU to kick again–and the Hoosiers nailed the game-winner. That?s two losses in a row for the defending Big Ten champion, which is struggling on offense.

Purdue. The Boilermakers were non-competitive in getting annihilated, 50-7, at Maryland. If this isn?t rock bottom, it has to be close. Purdue was out rushed, 400-10, and QB David Blough was sacked six times. The Boilers trailed, 36-0, before scoring, as Purdue was hurt by horrible blocking and sloppy tackling.

171, yards rushing by Northwestern?s Justin Jackson on 26 carries with a TD. He passed the 3,000-yard career mark on Saturday.

159, yards allowed by Michigan in a 14-7 home win vs. Wisconsin, which ran 28 times for only 71 yards. And Badger QB Alex Hornibrook hit just 9-of-25 passes for 88 yards with a touchdown and three interceptions.

140, yards rushing by Nebraska?s Terrell Newby on 27 carries with two TDs-113 came in the fourth quarter. His three-yard TD run gave NU a 17-16 lead in the fourth quarter. And his 63-yarder later in the quarter iced Illinois in a 31-16 Cornhusker triumph. Newby touched the ball on 18 of the Huskers? last 21 plays from scrimmage. NU is 5-0 and off next week.

173, points tallied by Maryland in starting 4-0. That?s a school record for the first four games of the season for the Terps.