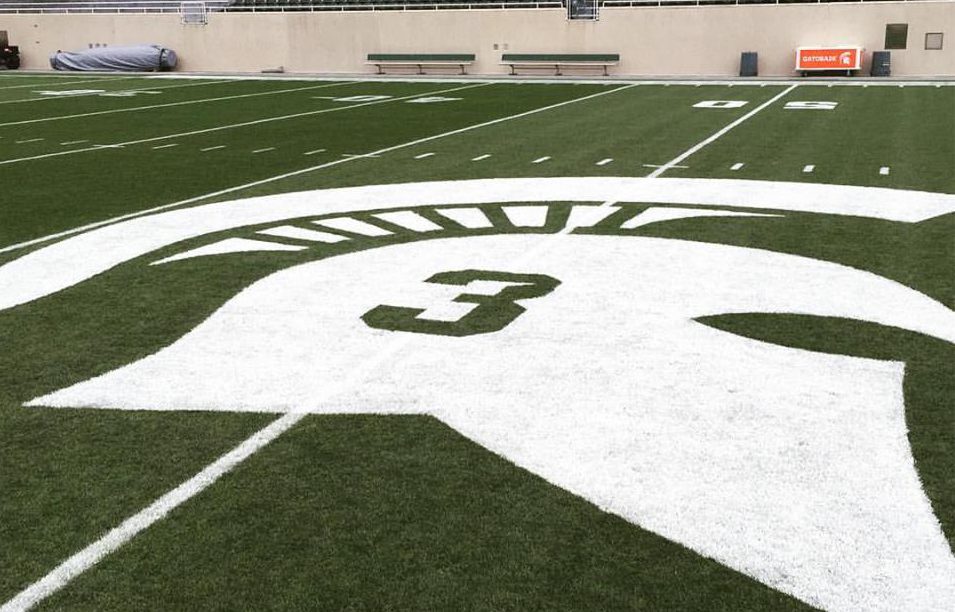 On July 23, 2016,  tragedy struck the Michigan Sate football program when Mike Sadler?s life was taken too soon. While I can?t speak to what Mike was like as a football teammate, I can share what Mike meant to my life off the football field. Many of you may recognize Mike as an exceptional football player, a four-time academic All-American who earned two degrees in five years, a future Michigan State Hall of Famer, and, yes, that hilarious punter on Twitter

I see a best friend and a remarkable human. I was proud to know Mike off the field, and it's why it makes his accomplishments and his story so special to me.

Certain people can brighten up your life simply by being who they are, and Mike was one of them. Endearing, hilariously quirky, brilliant, loyal, he was an unconditional friend. I met Mike at Forest Hills Northern High School in Grand Rapids, Michigan. I was a volleyball player bound to walk on at Michigan; he was a standout football player headed for Michigan State. We were an unlikely duo-a Wolverine and a Spartan. While the rivalry was strong, we shared a unique bond and an unwavering loyalty. Mike became a fixture at many of our family events, and he was always the life of our annual Christmas party.

Even when life took us in different directions, our Grand Rapids connection brought us together. I always looked forward to returning home during breaks because it meant seeing Mike, who was never changed by the the awards or the big stage of college football. It was always about the seemingly little things.

For example, Mike could play the guitar almost effortlessly. He wanted nothing more on a Saturday night than to enjoy a good beer with the people he loved. He would throw himself under the bus for a funny joke just to make a crowd laugh. He enjoyed chatting and laughing over a box of Kraft Mac 'n Cheese, extra cheesy, one of the staples of our friendship. I could eat the entire box while I wore no makeup, maybe a little zit cream, a gray sweatshirt and sweatpants, and he would embrace me all the same.

He read several books a week ranging from quantum physics to the works of Ernest Hemmingway, just so he could prepare himself for Stanford Law School. In what would be the last week of his life, he opted to stay home with his mom, Karen, to cook, play pool, and listen to music because she was the woman he adored most. He often said they were best friends, and he was proud of her.

Mike just had an unparalleled passion for life – you could see it in his smile. He lived life to the absolute fullest, because that was the only way he knew how. That amazing, infectious smile-a mischievous smile when he had something up his sleeve. It was a smile he wore just to share his zest for life with others. As a captivating personality adept at entertaining the Twitterverse with a witty Faux Pelini exchange, he had an endearing heart that let him walk into a room of strangers and make every single person feel important.

That?s how Mike made me feel as a friend-special, valued, loved, content with my flaws, and confident to be my true self.

Mike never talked to me about any of his accolades. He would tell me about his life plans and his passions and his goal to really make an impact. With his accomplishments in school and football, he really had it all but still stayed humble. He was the star football player who, at the end of the game, gave up his football gear to a child in need. He really did set his own standard for nothing short of perfection but was the first person to embrace the imperfections of anyone he met.

He is why I?m here to tell you about him today.

As Mark Dantonio said, Mike was a light to all. He always believed, and I know this because he was one of the first people to believe in me when I didn?t believe in myself. Mike dreamed big and inspired me to do the same after school. When I was close to giving up on my own sports broadcasting dreams, I worked four different jobs just to make ends meet. Mike was an unwavering voice of hope and reason to keep going.

If he had no doubts, why should I? He often reminded me that I would make it to the football sideline one day – we talked about that goal often.

I wish he was here to see it. He would have been the first person I called to share the news. I'd give him all the credit, and he'd just be proud that we did it together.

A week before the accident, Mike gave me a gift-the gift of time. Back in Grand Rapids on a break from my job in North Carolina, we had another McMahon family dinner. As usual, Mike was the honorary guest. He knew I didn't get home often and we shared memories and laughs. He was so present and in the moment, full of wit and humor. He even showed off his SnapChat artistry.

He was the happiest I had seen him. Nothing felt closer to home for me than spending time with Mike.

As I cling to our final moments and replay them over in my head, I am reminded how precious time is. Time is meaningless if you?re not spending it with those you love. Our final memory together also reminds us to live a genuine life of intent and purpose. Mike taught me that just by doing it. He exemplified these values: live with integrity, always help others, show compassion for every human being, and surround yourself with good friends and good people.

They help define you and they will carry on your legacy when you no longer can.

If there?s one thing Mike embodied most, he made life so much fun. If you?re not having fun along the way, he'd say, you simply aren?t doing it right. Life is too short not to live like he did. It is our duty then, to honor his spirit for as long as we live and keep his spirit alive through our life choices and through every single interaction.

There was no other person in this world like Michael Sadler. Not a day goes by that I don?t think about him and miss him dearly, but I am now inspired daily to live out each day the way he would. No one can fill his void as a trusted friend to many, a devoted teammate to the Spartan family, a prankster of a brother to Katie, and a beloved son to Karen and David. Mike, you were and remain so loved and missed by many. I am honored to have had you as a best friend and now a guardian angel.

My heart goes out to anyone affected by this tragedy, especially the Sadler family and the family of Nebraska punter Sam Foltz.

Until we meet again, my dear friend, rest in peace Michael Sadler.

About Michelle McMahon: McMahon, a Michigan native and former volleyball player for the Wolverines, is a BTN reporter. Find her on Twitter and Instagram.