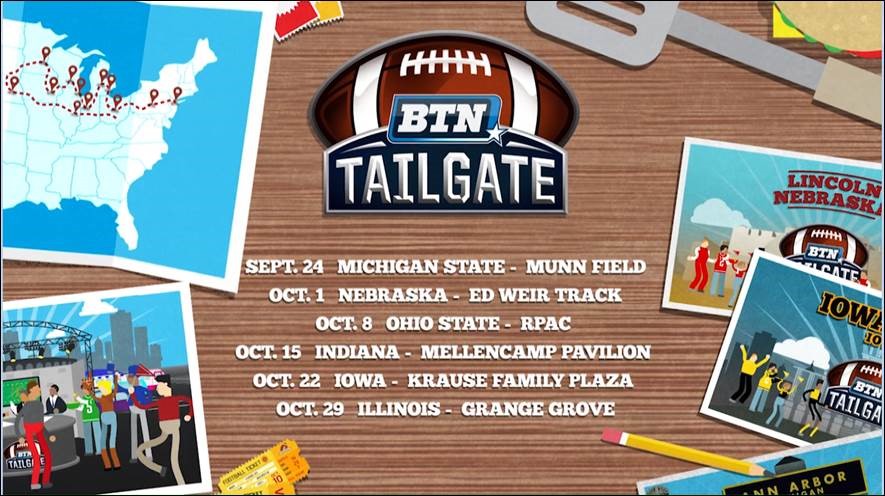 Big Ten Network today announced the sites for the first six weeks of BTN Tailgate, the network?s new pregame show originating from a different Big Ten campus each week during conference play. Tailgate?s debut episode will be live from East Lansing, when the Michigan State Spartans host the Wisconsin Badgers on Sept. 24 in a potential battle of top 15 teams. Over the first two to three years of the show, BTN Tailgate plans to visit each Big Ten campus.

In addition to free food and MSU branded giveaways in week one (while supplies last), there will also be a wide variety of sponsor activation to entertain the crowd presented by TIAA, U.S. Cellular, GEICO and Slim Jim.

BTN Tailgate is a live, 90-minute show beginning at 10:30 a.m. ET and will serve as Big Ten football fans? pregame home this fall with previews, special guests and analysis. Tailgate aims to capture the unique game day environment on each campus, with fan interaction, former coaches and players on set and special features. Alongside host Dave Revsine, BTN football experts Gerry DiNardo and former Chicago Bears defensive tackle Anthony ?Spice? Adams will go in-depth on each Big Ten matchup of the week as 14 schools march toward a conference title in Indianapolis.

On Oct. 1, Tailgate heads to Lincoln for a showdown between Nebraska and Illinois before rolling into Columbus on Oct. 8 when Ohio State takes on Indiana. On Oct. 15, Indiana plays host to Tailgate on Homecoming weekend in Bloomington with the Huskers in town.

The following weekend, Iowa City serves as the backdrop on Oct. 22 when the Hawkeyes take on the Wisconsin Badgers in a battle for the Heartland Trophy in Kinnick Stadium. To round out October, Illinois will welcome Tailgate to campus on their Homecoming weekend with the Minnesota Golden Gophers visiting Memorial Stadium.

Entrance will open at 9 a.m. ET, 90 minutes prior to the start of the live show.

Three of its first six weeks will involve four teams currently ranked in the top 15 of the AP Poll with No. 3 Ohio State, No. 9 Wisconsin, No. 12 Michigan State and No. 13 Iowa.

BTN Tailgate can be streamed via the web, smartphones, tablets and connected devices on the newly redesigned BTN2Go, BTN?s digital extension.