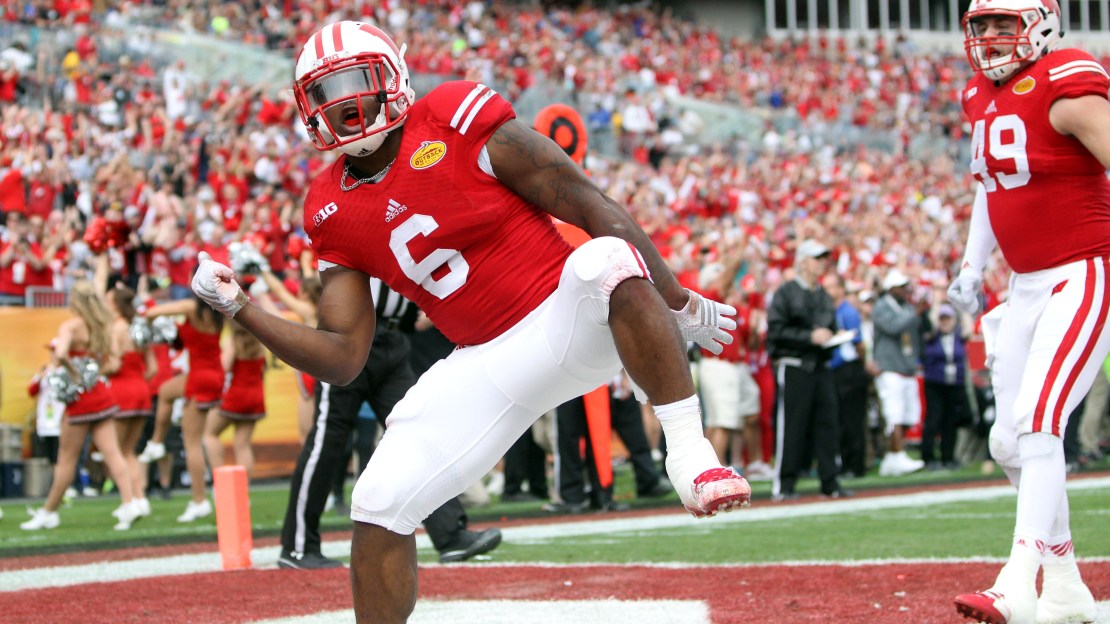 MADISON, Wis. - The BTN Tour bus was in Wisconsin on Monday to check out the Badgers. Paul Chryst enters his second season as the Badgers' head coach and should have a team capable of competing for a Big Ten West title in 2016.

[ MORE: Dienhart: Here's what I learned at Wisconsin practice ]

Chryst has a nice collection of running backs and the offensive line should be much-improved this year. However, the big question remaining is who will start at quarterback for Wisconsin?

The defense should be solid, led by an impressive collection of linebackers.

Here are some fun takes from Wisconsin's practice.

Most impressive player: RB Corey Clement had his 2015 ruined by a sports hernia injury. But he looked good on Monday. Clement has gained some weight and looks faster.

RB Corey Clement has added weight & speed, looking to regain his 2014 form for @BadgerFootball. He may return kicks pic.twitter.com/F86r98FpJC

Impressive newcomer: UW has three promising true freshmen wideouts. A.J. Taylor looked good on this day. He can move. Quintez Cephus is a big target. Kendric Pryor is the fastest, but he was out today.

On the rise: LB Jack Cichy was the MVP of the bowl game. And he looks like he has picked up where he left off for a good set of linebackers.

Nagging question: Is there a capable QB between Bart Houston and Alex Hornibrook?

Under the radar: Derrick Tindal is having a good camp and looks like a good CB bookend to Sojourn Shelton.

Before practice, Paul Chryst gave no indication who was leading the QB battle between fifth-year senior Bart Houston and redshirt freshman Alex Hornibrook. But Chryst did say that Hornibrook would have to ?beat out? Houston for the job. So, it sounds like it?s Houston?s gig to lose.

The offensive line passes the eyeball test. This is a good-looking group that looks to be back to Badger standards after a sub-par 2015. Ryan Ramczyk is slated to start at left tackle but was out today. Paul Chryst calls him the best lineman. Dan Voltz will start at a guard spot, but he was held out today as he continues to come back from a knee injury. Micah Kapoi and Beau Benzschawel and Jon Dietzen also are in the guard mix. The right tackle is Jacob Maxwell and Michael Dieter is the center.

In the pantheon of massive Wisconsin O-Linemen, Micah Kapoi is definitely one of them pic.twitter.com/iq004fDAJE

RB Corey Clement was moving well. He had 2015 ruined by a sports hernia injury. But he has added weight and looks quicker. He even wants to run back kickoffs. Stay tuned. This team has nice RB depth, with Taiwan Deal the No. 2 man and Dare Ogunbowale No. 3. This unit could be a lot like the 2010 RBs, when John Clay, Montee Ball and James White all ran for at least 996 yards. Pitt transfer Chris James looks like the next great one. He runs like Clement. Remember the name, as he sits out 2016.

The search continues for a No. 1 wideout. Robert Wheelwright is the man-for now. He?s a big wideout. Jazz Peavy is a lithe target at No. 2. George Rushing has had a great camp and is making a push. Reggie Love also is in the mix. Keep an eye on three true freshmen: A.J. Taylor, Quintez Cephus and Kendric Pryor, who was out today but is the fastest of them all. They are athletic options that wideout coach Ted Gilmore told me ?will make things interesting.?

Robert Wheelwright and Reggie Love hope to solve the No. 1 WR conundrum for @BadgerFootball. pic.twitter.com/25aHtnMEJf

New defensive coordinator Justin Wilcox will keep the 3-4 of Dave Aranda, but he may not be as exotic. The line looks good with Conor Sheehy and Chikwe Obasih at the ends with Olive Sagapolu on the nose. Alec James also figures in at end. Keep an eye on true freshman Garrett Rand at the nose. He is very strong.

This is one of the better LB corps in the league, even with T.J. Edwards out indefinitely with a foot injury. He?s the team?s top linebacker, according to Paul Chryst. T.J. Watt, Chris Orr, Jack Cichy and Vince Biegel are a nice foursome.

TE Troy Fumagalli was out today. Eric Steffes ran with the first team. Kyle Penniston also is battling, and Zander Neuville was moved from DE to TE today to add depth. This always is a big position in Madison.

The secondary is a work-in-progress. CB Sojourn Shelton is the lone starter back. Next to him is Derrick Tindal, who has had a good camp. The nickel man is Natrell Jamerson. At safety, Leo Musso, D?Cota Dixon and Arrington Farrar are in the mix. True freshman Patrick Johnson and Eric Burrell may be factors. The staff likes them. New DB coach Jim Leonhard does a good job.