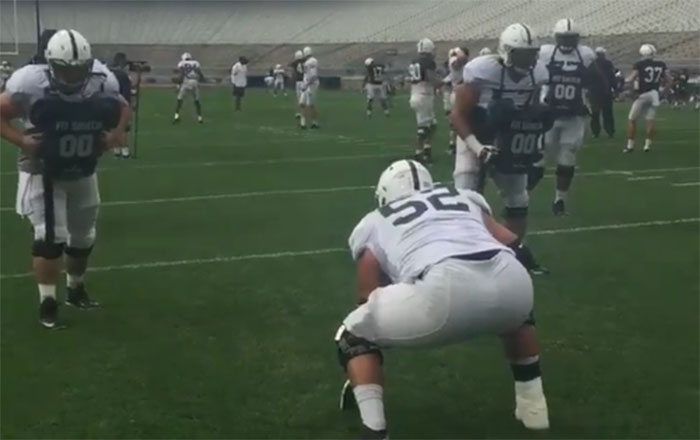 Always one of the most accommodating stops on the tour, the Nittany Lions never fail to impress.

On this day, the team practiced at beautiful Beaver Stadium, and, as detailed below, Franklin was on his game.

Check out some of my fun takes from Saturday's practice:

Most impressive player: LB Nyeem Wartman-White is 6-1, 248 pounds of athletic fury who looks primed for a big senior season send-off.

Top specimen: RB Saquon Barkley has legs that look like tree trunks and an overall physique that is NFL-ready.

Is there a better RB in the Big Ten than Saquon Barkley of @PennStateFball? Nope. pic.twitter.com/efeBtO3bvG

Loudest coach: It can?t be anyone but James Franklin, a walking, talking dervish of energy who knows just one speed: fast. Gotta love his excitement and energy.

Impressive newcomer: Connor McGovern. The true freshman is 6-5, 310 pounds and could push to start at a guard spot.

On the rise: QB Tommy Stevens is making a push for the starting job. He?s 6-4, 215 pounds with a strong arm and nice feet. He is perfect for this offense.

Under the radar: The ?Twin Towers? at wide receiver, in Irvin Charles and Juwan Johnson. Each is 6-4 and showed nice ball skills today. The redshirt freshmen could be formidable.

Number: 82, times Christian Hackenberg was sacked the last two years. That was 12 more times than any other player in the last two seasons.

The QB race is interesting. Most felt the job was Trace McSorley?s to lose. Well, Tommy Stevens is closing the gap. James Franklin has said he?s in no rush to name a starter. This is going to be interesting. Each signal-caller is a nice fit for what the Nittany Lions want to do as a runner and a passer. I have a feeling Stevens may be the guy when it?s all said and done.

New @PennStateFball o-line coach Matt Limegrover has a unit that teems with potential and must deliver. pic.twitter.com/3lQrtqynBA

The offensive line needs to make strides after being a weakness in recent years. Former Minnesota offensive coordinator/o line coach Matt Limegrover is now in State College. One revelation this August: Andrew Nelson has been moved from left to right tackle. He had just moved to the left in the spring. Nelson looks solid at left tackle-but could move again. And Brendan Mahon was the right tackle when I watched practice. Derek Dowrey and Ryan Bates were the No. 1 guards, while Brian Gaia was the center. Keep an eye on true freshmen Connor McGovern and Michal Menet. Each is advanced for their age and could be factors at guard. They ran with the second team today. Still, this unit is a work in progress.

Penn State has a nice collection of running backs. Heck, it may be the best in the Big Ten. Saquon Barkley is a stud, while Mark Allen and Andre Robinson are small, tough runners. And true freshman Miles Sanders is drawing plenty of praise. These guys will be fun to watch in the Nittany Lions? new up-tempo spread attack.

John Reid and Grant Haley are slated to start at corner slots. Keep an eye on Zech McPhearson, a true frosh. Penn State has focused on recruiting a mixture of tall corners who can hit and shorter ones who can matchup with opponent's speedy receivers. This could be a nice secondary. I love safety Marcus Allen. Position coach Tim Banks says they have worked on improving his coverage skills.

This receiving corps is as good as advertised with the likes of DaeSean Hamilton, Gregg Garrity, Saeed Blacknall and Chris Godwin, who is the headliner. Brandon Polk and DeAndre Thompkins could make moves. Redshirt freshmen Juwan Johnson and Irvin Charles are called the ?twin towers,? as each are 6-4. Each made some nice catches the day we watched practice.

Really liked Juwan Johnson in camp last year – ended up as a RS. Still like him. Will have role in deep WR crew pic.twitter.com/2GLJG3FCWO

The defensive line has potential. And it has something to prove with Carl Nassib, Austin Johnson and Anthony Zettel gone. Tackle Parker Cothren is looking good and needs to lead. Garrett Sickels could be a bellwether off the edge. Evan Schwan was limited on this day, but he must play a big role at end. The tackles lack experience but Kevin Givens could be a good one. The guy is an active force on the interior.

The linebackers are good-one of the best sets in the Big Ten, perhaps. Nyeem Wartman-White, Brandon Bell and Jason Cabinda for a nice triumvirate. The return of Wartman-White is huge. He was injured in the first game in 2015 against Temple and missed the rest of the season. He had 75 tackles in 2014 and has 21 career starts. This unit should help improve a run defense that ranked just eighth in the conference a year ago after allowing 151 yards per game. 5 of the team?s top 6 tackles at that position return, led by Jason Cabinda and his 7.7 tackles per game.