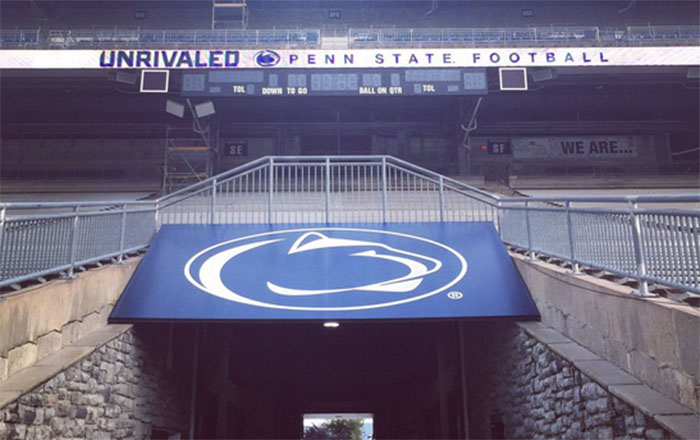 STATE COLLEGE, Pa. — This is an important training camp in State College, as Penn State looks to make a move up the pecking order of the challenging Big Ten East. To do that, some key questions must be answered for a program that is finally up to its full allotment of 85 scholarships.

It was a busy offseason for James Franklin and Co., as he overhauled his staff with new coordinators on both sides of the ball.

Here are five things I learned at Penn State practice.

1. The quarterback situation is interesting. The staff isn?t any closer to naming a starter between Trace McSorley and Tommy Stevens. Each is an athletic option capable of running the zone-read play while also being a solid passer. On this day, each flashed a nice skill set. I really like Stevens. At 6-4, he looks the part. And he can run. Joe Moorhead told me after practice he doesn?t like to play two QBs. Regardless, this position must develop to take advantage of a nice collection of receivers and backs. No doubt, there can?t be many better collections of wideouts than this group that includes Chris Godwin, DaeSean Hamilton, Brandon Polk and Saeed Blacknall (who was limited on this day), among others.

2. The offensive line looks better. And, that?s a good thing. A few years ago, this was a group that lacked size and depth. No more, as there are more capable. New line coach Matt Limegrover is having an impact, too. This group could get a push, which would be a big boon for an offense with plenty of skill-position talent. Still, the jury remains very much out, as positions are fluid. Andrew Nelson looks solid at left tackle. And Brendan Mahon was the right tackle Derek Dowrey and Ryan Bates were the No. 1 guards, while Brian Gaia was the center. Stay tuned. This is a work in progress.

By all accounts, RS frosh Ryan Bates had a great spring – clearly in hunt to start at G pic.twitter.com/7en9mfTWVP

3. Saquon Barkley is something special. In fact, he may be the top back in the Big Ten. The power and speed he flashed as a freshman sensation is still there. And now he has experience, savvy and confidence. But we didn?t get to see much of him on this day, as the Nittany Lions showed off their depth at the position. Mark Allen is a diminutive runner with power, and Andre Robinson is another nice option. And don?t forget about freshman stud Miles Sanders, who got dinged on this day.

4. The linebacking corps is gonna be good. It could be one of the best groups of linebackers in the conference. Nyeem Wartman-White had 2015 ruined by injury. But he is back and is moving well and looking good. Jason Cabinda is a stalwart. Brandon Bell is the third LB, but he was limited on this day. This is a nice trio with good athletic ability for a defense being run by new coordinator Brent Pry.

BTN Camp Tour #PennState Certainly the best PSU team in last few years if you look at 1 thru 85 – how good they are 1thru 44 we have to see.

5. The offense of new coordinator Joe Moorhead is fun and exciting. He still has a lot to install, he told me. No doubt, this attack looks a lot different than that of ex-coordinator John Donovan. The Nittany Lions will operate at a quick pace from a spread set that will include quarterback runs, read options and more. This is the style James Franklin has wanted to run since arriving in State College. And he also has the QBs to execute it, as Christian Hackenberg was a misfit for what Franklin wanted to do. We didn?t see the full array of what his attack can do on this day, as the staff worked a lot on the passing game. When it?s all said and done, this offense will have a lot of flexibility and dynamic ability-as long as the line develops and a steady QB emerges.