Debate it: Will Michigan's move to Nike/Jordan help boost recruiting? 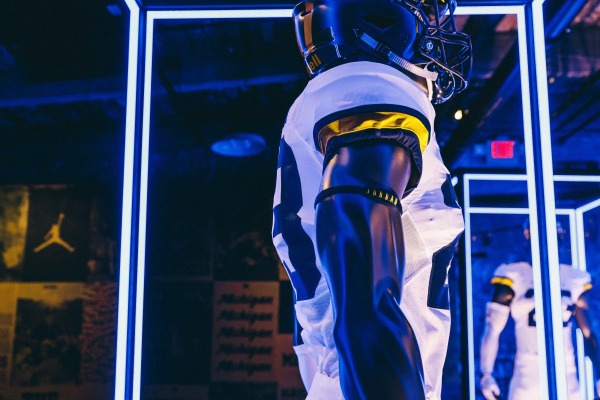 The biggest story throughout the college football world this week has been Michigan's move to Nike and the Jordan Brand.

The university celebrated Nike and Jordan becoming the school's official athletic footwear, apparel and equipment provider at midnight on Monday with a launch party the M Den store on South State Street in Ann Arbor.

On Tuesday, media members were given a first glimpse of the Jordan Brand jerseys the team will be wearing out on the gridiron this season.

But here's a question that has to be on everyone's mind right now: Will Michigan's move to Nike and Jordan help in recruiting?

I posed that very question to BTN.com senior writer Tom Dienhart in this edition of "Debate It."

Will Michigan's move to Nike and Jordan help the Wolverines in recruiting?

Here it is, ladies and gentlemen! Your first look at @UMichFootball's new @Jumpman23 football jerseys. pic.twitter.com/S6w9vaArEz

I find it difficult to comprehend that a recruit would base a decision on where he wants to play and get educated on what company manufactures an item of apparel.

The media coverage of the Michigan-Nike marriage seemingly was on par with Royal Family media coverage, another phenomenon I don't understand. Who cares what a powerless Royal Family does? And, who should care what company makes a uniform for a school?

Shouldn't winning on the field matter more to a recruit? Shouldn't brick and mortar facilities, quality of education, opportunities after college to get a job mean more? You know, stuff like that? Seems a bit more important to me than a shoe company stitching together uniforms.

So, I say "no." The Nike-Michigan union shouldn't provide any big bump to Michigan recruiting. I mean, how much more of a bump can it get from where it is at? Jim Harbaugh already is recruiting at a mega level. Michigan would do just fine in recruiting if it wore Vans. Just because a school has cool unis doesn't mean 5-star kids will sign. The same 15 elite schools will continue to sign the best recruits now ? and forever–no matter what shoes or apparel a school wears.

I like your old school approach here Tom, but I'm going to have to disagree with you on this one.

I don't think a kid is necessarily going to pick a school solely based on what company manufacturers an item of apparel, but I do think it will help.

Have you seen all the rage behind Jordan Brand shoes in this day and age? Just about every big-time athlete owns a pair of Jordans. Go into a basketball locker room after a game when the team changes out of their on-the-court shoes, and I guarantee you will see at least one player wearing a pair of Air Jordans on their feet.

Now, take that into consideration, and add in the fact that Michigan is the only football program in America to have Jordan as their official athletic footwear, apparel and equipment provider. That's a home run for a recruit in my book, especially a kid who maybe couldn't afford the pricey Jordan gear growing up, but if you come to a school like Michigan, there it is all waiting for you.

Now, should this be a factor that makes or breaks a kids decision to go to a certain school? No way, it shouldn't be. But if I'm a five-star recruit that is being offered by every school in America, and at Michigan I know I get to wear the Jordan brand across my chest, on my feet, and on my head, I'm taking that into consideration.

I almost feel dirty taking this side of the argument, but I truly believe that you will see an up-tick in Michigan's recruiting because of this move. As you mentioned, Jim Harbaugh is already recruiting at an extremely high level. My guess is that this move takes it to a whole new level.