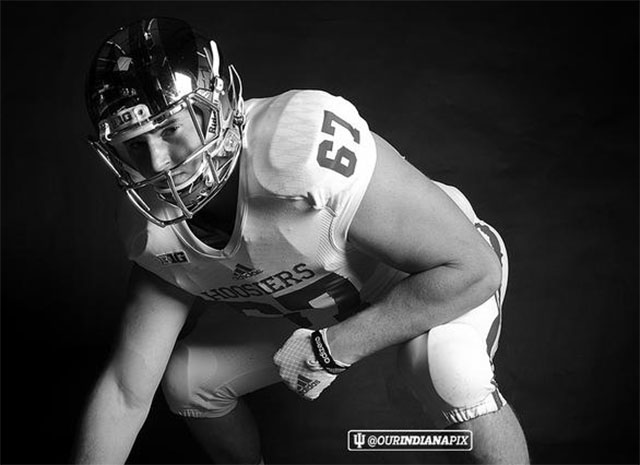 Coaches can now interact with recruits on Twitter. Oh, man. The Fanboys are gonna love this.

The rule makes it permissible for staff members to like, retweet, favorite or endorse a recruit's post in any way on public social media platforms. They aren't allowed to tweet directly at recruits. Well, I have a feeling it won?t be long before there are no barriers involving coaches/recruits/Twitter. Just give it another year or two.

When you think of Indiana, you typically think of a prolific offense led by a good passing game. But Kevin Wilson really has built his program on running the ball behind a tough line. And he?ll have a good one this fall.

The bellwether? It?s Dan Feeney, maybe the best guard in the nation. Big props to IU o-line coach Greg Frey, one of the best.

Another year, another Bullough is at the heart of the Michigan State defense. LB Riley Bullough is the latest in a long line of stud Bulloughs to matriculate through East Lansing.

Bullough is the centerpiece of what's expected to be a position of strength for Michigan State's defense. The preseason depth chart includes junior returning starter Jon Reschke and Andrew Dowell at either side of Bullough, although junior Chris Frey is also a strong contender for a starting spot. The Spartans are also hopeful to have former starter Ed Davis back for his sixth year of eligibility.

"I think we can go two deep at every one of them, and really we can go beyond that," Spartans coach Mark Dantonio said.

Now, the line has to come together. If it does, this will be a very good defense.

Is there a new narrative for the Fab Five? Brendan Quinn of Mlive.com examines.

A big key to being embraced again in Ann Arbor, according to Quinn: The Fab Five needs to put on a better public face. Recent years have seen Chris Webber, alone on an island, spar with Jalen Rose, and sometimes others, about whose version of reality is, well, reality. The animosity has been vivid and makes it difficult to believe that any discourse can occur without devolving into a blame game for all to see. What's needed before anything is a ceasefire of petulance.

Good luck with that. Remember, MASSIVE egos are involved here.

David Jones of Pennlive.com takes a look at the 16 stingiest defenses of the Nittany Lions? Big Ten era.

There are some good-and memorable-defenses on this list. I loved the 1994 Illinois defense led by studs like Dana Howard, Kevin Hardy, Simeon Rice and John Holecek.

Loren Tate of the Champaign News-Gazette thinks the Big Ten?s ninth conference game could hurt bowl hopes for some schools. And, I?m not gonna argue.

Tate notes that the extra Big Ten game likely decreases the chances for fringe bowl teams to make the postseason. Building programs used to be able to count on three or four non-con wins to pad their resume. That meant fewer league wins were needed to reach the six-win level. Bill Mallory used to make a killing by going 4-0 vs. a soft non-league schedule and then just needing two Big Ten wins for bowl eligibility. Now, the road to six wins and bowl eligibility is more difficult.

Kudos to Chad Leistikow of HawkCentral.com, who predicted the record for each Big Ten team.

He thinks Michigan is the best team in the Big Ten East, and Iowa is best in the West. But he has got Ohio State, behind Big Ten MVP J.T. Barrett, routing Minnesota — yes, Minnesota — in the league championship game Dec. 3 in Indianapolis. I likely.

The AP has determined its all-time Top 25. And, many Big Ten teams made it.

I guess I was a bit surprised to see Iowa come in at 25. Kudos to Hayden Fry and Kirk Ferentz. And Wisconsin is No. 24. This is an interesting Badger factoid: During a 29-year span from 1964-92, the Badgers had just 10 poll appearances. Since '92, Wisconsin has made 215 poll appearances. Thank you, Barry Alvarez.

Purdue is getting ready to trek to Spain for a hoops tour. It?s a trip like this that can serve as springboard to a big season. While most pundits fawn over Wisconsin, Michigan State and Indiana, don?t forget about the Boilermakers. This will be a very good team this winter.