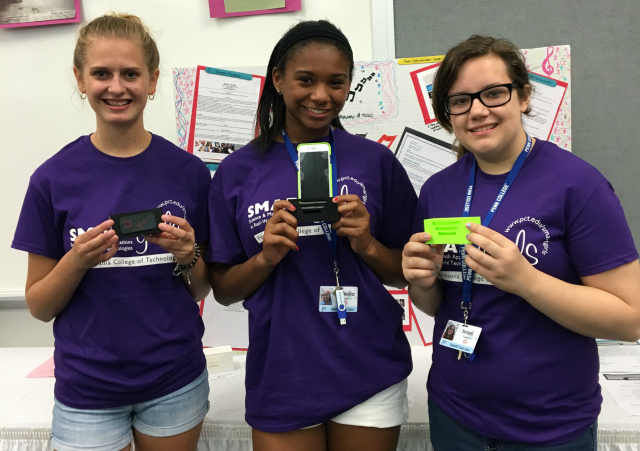 Soon the typical camp experience may no longer be filled with sing-alongs and s?mores around a roaring fire. Instead, it may involve lasers and startup plans.

For Anna Stefanowicz, 14, it included diving into the deep end of science, technology, engineering and mathematics.

No mosquitos were involved.

According to Stefanowicz, she couldn?t dream of having a better summer experience.

?Oh my gosh, it was so awesome,? gushes the high school sophomore. ?I was with so many girls trading really cool ideas. We were encouraged to express ourselves. We were told that girls have the brains and perseverance to be leaders in technology.?

Located at Pennsylvania College of Technology in Williamsport (affiliated with Penn State for this project), the weeklong, sleep-away camp?s mission was simple: provide girls in grades 9-12 with experience in real-world science, tech, engineering and math (STEM) as a foundation for future jobs and entrepreneurial projects.

?Statistically speaking, the numbers are increasing, but women are still under represented in those fields,? Riden says. ?This camp was designed so younger women could get involved in these fields and gain early experience.?

At the camp, the girls listened to speakers and were shown how to write their own business plan. Other topics included evaluating business ideas and exploring funding options.

?We broke the girls into teams and let them run with their own creativity,? Riden says. ?They created their own business products and started exploring options to turn it into a great business.?

During camp, they girls used 3D printers, laser and vinyl cutters and digital technology in the Carnegie Science Center Mobile Fab Lab. ?The camp ended with the students developing a business plan and replicating a product they believe would be successful today,? Riden says, with prizes awarded for the best ideas.

This was Stefanowicz?s second year attending the camp. She first heard about it when she was in middle school and a counselor suggested she explore a different summer option. It was a perfect fit. Last year she won first place in the competition. ?Both years, I did a 3D printing project, plus a business plan.? she said.

This year, her project was more complex than the last; she made a wireless speaker that contained no battery. ?My team knew if you cut a hole in a cup and put a phone into it then the sound is amplified,? Stefanowicz explained. ?We measured our phones and created a box with a slant inside of it to place the device in there. The sound amplifies and becomes a speaker.?

Once again, she won first place. ?It was a shock,? Stefanowicz says. ?Everyone had such great ideas.?

?All of the girls were so eager and enthusiastic,? Riden says. ?There were so many innovated ideas.?

As for the future, Stefanowicz said that she would definitely attend this camp next year. Her dreams don?t end there. ?Maybe someday I?ll even be on ?Shark Tank,?? she said with a laugh.

?If not, I know I want to do something in technology as my career. This camp has been an awesome way to explore what that means.?