How Iowa students use lasers to see underground: BTN LiveBIG 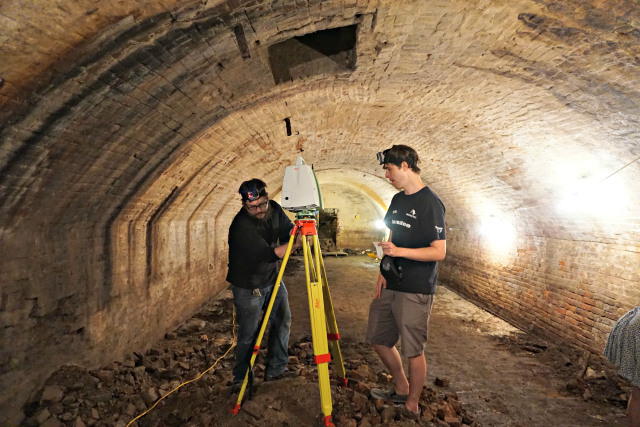 Now a group of intrepid University of Iowa professors, along with a team of colleagues and students, are descending into that depth to map the subterranean history of old Iowa City.

Along the banks of the Iowa River in the 1850s, in what was then a fledgling frontier town, Mr. Graf?s Union Brewery was doing brisk business. But he was in need of a consistently cool location to ferment and store his beer before it was shipped out to the thirsty masses. A cave would do the trick, but caves were in short supply in downtown Iowa City.

So he dug one, then another.

Soon, Mr. Graf?s brewery and a few others were connected by a modest warren of tunnels and chambers.

As time went on, the forces of prohibition caused the nation to dry up and, with it, so did Mr. Graf?s business. The brewery folded, the building was sold, and the great beer caves of Iowa City were covered over and mostly forgotten save for the occasional urban archaeologist spelunking the dank depths.

A century-and-a-half later, a pair of colleagues from the University of Iowa met for coffee. Dr. Michelle Weinhold, a geographical information systems (GIS) analyst with the university?s Iowa Flood Center, told Adam Skibbe, a GIS analyst with the Geographical and Sustainability Sciences department, about the town's man-made caverns. Skibbe-who, along with his GSS colleagues, uses LiDAR (Light Detection And Ranging) technology to map geographically and historically unique spaces-and Weinhold concocted a plan to get themselves and their equipment down there.

?We decided it would be awesome if we could get our terrestrial LiDAR down there,? says Skibbe, who saw the need to document and preserve the caves for posterity. ?It occurred to us that most of the town didn?t really realize what was down there. Certainly many [residents] were never going to get the chance to go down there.?

LiDAR works much like its sonic counterpart radar, but uses reflected laser light instead of sound to create a detailed 3-D image of a space. Uses range from quickly mapping dense forests to measuring the rate of movement along seismic fault lines. Collecting up to 50,000 points per second, the LiDAR unit plots those points along an XYZ axis and creates a virtual image with near photorealistic quality.

Skibbe and his team, which included students along with representatives from Iowa's Office of the State Archaeologist, spent roughly three and a half hours in the caves performing six total scans. These were just the first steps toward creating an immersive experience for future generations.

?We have quite a bit left to do yet,? explains Skibbe. ?We?re tracking the outside of the cave system itself and tying it to the above-ground geography of the city. Eventually it?s going to be a VR sort of environment. Think of putting on an Oculus Rift and being able to explore these caves.?

A virtual reality tour along with several ?fly-through? videos his team is creating are set to become part of a larger presentation tying together archaeology, geography, and history. To that end, the team is rounded out with the addition of Dr. Sarah Bond, a classics professor who Skibbe says brings a knowledge of the ?pop cultural aspects of ancient civilizations.?

?The idea is we?re sort of taking a multi-faceted approach to the project,? says Skibbe. ?It?s not simply the data and the visualization of the data. Ideally what we want to do is spin this into an hour-long presentation to show off what it is, [the history of] beer-making in Iowa City [and] the history of that particular area of Iowa City.

Until then, Skibbe and his students and colleagues at the GSS department have no problem keeping themselves busy. He notes that many of the proposals for additional sites to scan come from the students themselves. The team captured scans of the old territorial capitol building on campus and several from inside Kinnick Stadium giving Hawkeyes fans an all-access peek behind the scenes. And Skibbe is ready to help preserve historic spaces whenever and wherever they may be.

?If something comes up, it?s not a big deal to get this out there," he says. "I can grab a couple students to go with me and we?ll scan whatever interesting comes along.?