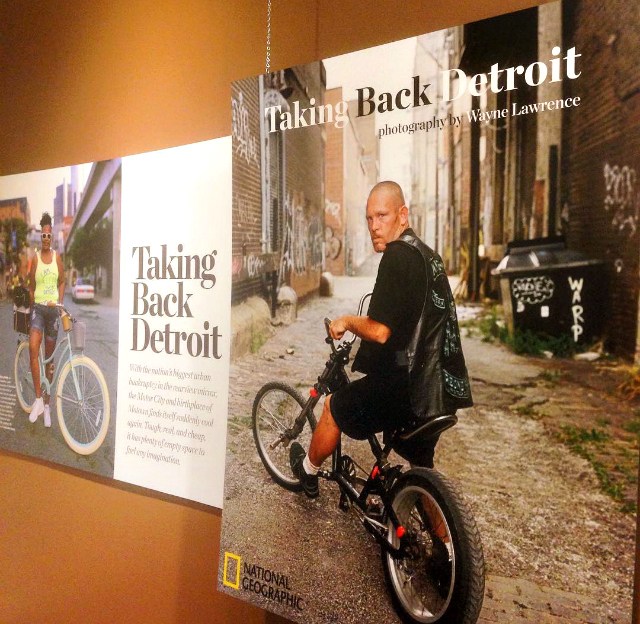 Guests visiting Michigan State University Museum's "Taking Back Detroit" exhibit may be inspired by the city's resurgence in spite of the adversity of recent years. They may also be touched by the first-hand accounts of financial hardships and overall struggle that native Detroiters have endured. But more than anything, museum organizers hope visitors ask themselves a question after experiencing the new exhibit: What?s next for the city and its people?

?I don?t want to sugarcoat it and say it?s all about positivity,? explained Lora Helou, acting director for the MSU Museum, which is accredited by the American Alliance of Museums and one of the oldest museums in the Midwest. ?It?s also about challenge and struggle and overcoming a lot of difficulty. But that?s what makes it so exciting, to see that this is very solution-oriented.?

The MSU Museum previously produced the exhibition ?Detroit Resurgent.? When National Geographic recently unveiled its ?Taking Back Detroit? feature on the city and people who live there, plans were made to partner with the magazine on the current exhibit. The National Geographic?s feature was authored by Susan Ager and the magazine?s editor-in-chief, Susan Goldberg - both graduates of MSU.

Helou?s hope is that the exhibit, which opened in June and runs through January 2017, will resonate with its visitors, motivating them to somehow participate in the city?s revival as it recovers from bankruptcy.

?I challenged our team to think about what we want people to do with the stories and information we?re presenting, knowing that the story isn?t over,? said Helou. ?We see this as a way to hopefully prompt people to think ?Now what??

Helou added of the exhibit's visitors, "I hope they?ll be thinking about solutions and how people can work together to solve problems, as well as how universities can work with [them].

Similar to what ran in the magazine, large format portraits taken by photographer Wayne Lawrence are accompanied by narratives from residents of the city who discuss the challenges they've faced and the obstacles they've overcome. Also featured is a massive National Geographic map of Detroit.

?It?s the portraits that really draw you in,? noted Helou. ?We wanted to honor Detroiters in their own words, which I think is really important because there is so much misinformation and misperception about Detroit. We are bombarded with images of abandoned or derelict buildings and sometimes that is about as deep as it goes."

?One of the real strengths of the work done by National Geographic was allowing Detroiters to speak for themselves in a very honest way,? continued Helou. ?There?s certainly a sense of pride, resilience and honesty about the challenges that people are facing, but also a lot of commitment. People are determined to make a life in Detroit and find a way to move forward.?

Much of the exhibit's emphasis is placed on what lies ahead, focusing on the city?s collective ?challenges, hopes, ideas, grit and determination,? as described by a MSU Museum press release. In part, that?s where MSU, its faculty and its students come into play.

?It?s the issue of what do we do now and that I think comes through in…the work our MSU faculty has been doing,? noted Helou. ?We look at issues of air quality, microbiomes, and how neighborhoods can affect our health. That could include whether there are enough trees or gardens in a neighborhood, or abandoned houses or illegal dumpsites. All of those things can affect our air quality and our health. We also consider access to healthy, fresh food. We want to know how those things can be made better.?

The exhibit has been open less than a month, but Helou said the early feedback has been very encouraging.

?People come in and have this immersive experience, especially when they are multi-generational visitors,? Helou explained. ?It is information, it is content and it is experiences, often shared, which can be accessed by people on a lot of levels. National Geographic has done some really great work in drawing people in to engage with a complex subject like this where there are no easy answers."

At the end of the day, though, it comes down to one question: What?s next for Detroit and the people who live there? It?s Helou?s wish that guests at the MSU Museum help in providing an answer.

?We often think about museums as a destination where you go and see something cool. And we do that, but if that?s all we do, the experience may stop there. This is an exhibit and an experience where there are issues and ideas that can go beyond our walls, and that is powerful and rewarding work for us to do.?