Watch the Big Ten go to the dogs (and cows): BTN LiveBIG 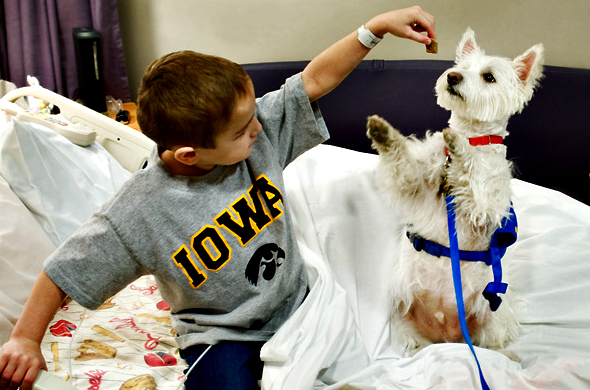 A general rule on the Internet holds that the more cute animals you can fit into a post, the better.

By that measure, this may be the greatest LiveBIG post we have ever done.

You already know Big Ten schools are on the forefront of work in science and medicine. But you may not know that whether it?s humans making animals lives better or animals making human lives better, scientists and doctors at Iowa, Nebraska, Michigan State, Minnesota and elsewhere are developing new techniques and breakthroughs every year.

Take a look at some of our favorite stories involving two-and-four-legged creatures at a campus near you.

These visits come courtesy of the hospital?s Furry Friends program, which helps patients on their quest to better health by providing canine companionship. Research shows that interacting with animals can lower blood pressure, reduce stress, decrease loneliness and boost overall feelings of well-being.

Nebraska professor working to get horses back on track

This lifelong passion for horses has been the driving force behind her career as an educator and an ambassador for the benefits of equine studies. An associate professor at the University of Nebraska-Lincoln, Anderson devotes half her time to teaching and half her time to extension work. Her work at the university level is serious and scholarly, and includes classes on horse management, nutrition and reproduction, and the equine industry.

?Releasing a bird back to the wild is an amazing experience,? said Julia Ponder, D.V.M., executive director of the Raptor Center. ?It never gets tiring.?

Since 1974, The Raptor Center has been tending to injured and ill birds of prey. While many birds feed on other animals, birds of prey are defined by ornithologists as those that possess keen eyesight, strong feet with long talons, and a sharp, curved beak. This group includes eagles, hawks, falcons, owls and harriers, among other varieties.

You might say that Rudy the cow is a bit of a rock star. Every year, this steer makes appearances at roughly 20 different schools and festivals across Nebraska, interacting with between 2,000-3,000 people who - in the name of science - put their hands inside his stomach. You see, Rudy?s not just any old bovine: He?s the star attraction of the University of Nebraska?s Husker Mobile Beef Lab.

There's no pull quote here since it's just a video, but c'mon, a dog getting his smile fixed? That's just…what? No, we?re not crying. You?re crying. It?s dusty in here or something.