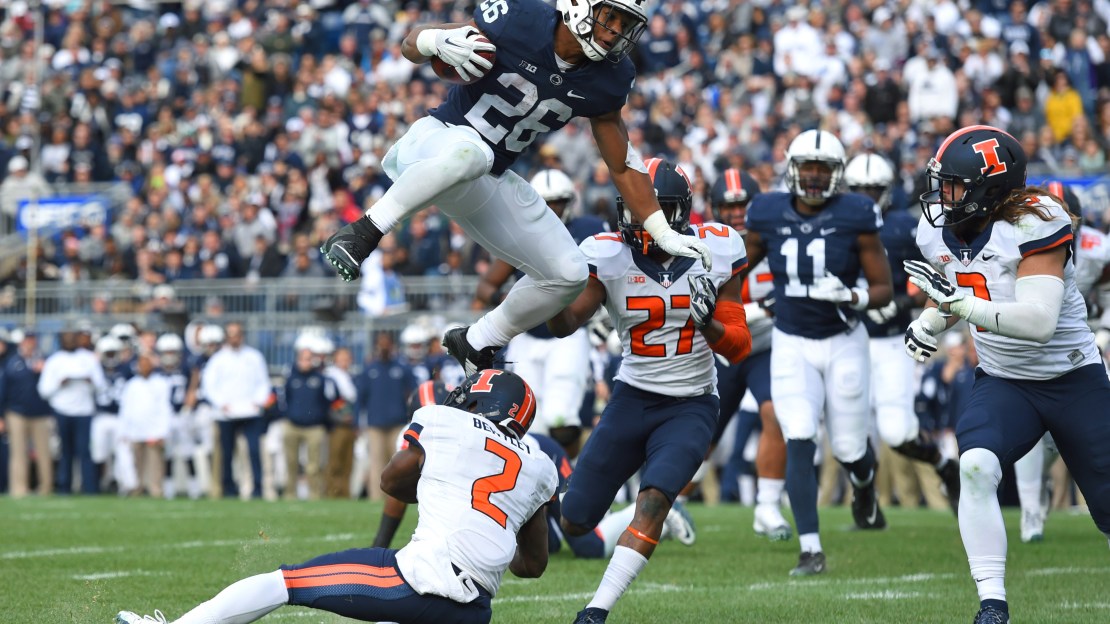 Yes, Ohio State?s all-world talent Ezekiel Elliott is gone, in addition to Illinois' Josh Ferguson, Iowa's Jordan Canzeri and Maryland's Brandon Ross. But the Big Ten is loaded with plenty of options/depth at running back entering the 2016 season. The impressive group is led by Penn State wunderkind Saquon Barkley.

1. Saquon Barkley, Penn State, So. The future seems limitless for a guy who set the Penn State freshman rushing record last season with 1,076 yards. He did all of this despite missing two games with an ankle injury and receiving just one carry in the season opener vs. Temple. Could Barkley leave campus as an all-time great?

2. Justin Jackson, Northwestern, Jr. He is the hub of the NU offense, running for 1,418 yards in 2015. And Jackson is the ultimate workhorse, carrying 312 times last season for a ground-pounding attack. Only two backs in America ran more times.

3. Corey Clement, Wisconsin, Sr. He?s back and supposedly better than ever after a sports hernia injury limited him to four games in 2015 after he ambled for 949 yards rushing in 2014. Clement could end up on top of this list.

4. LJ Scott, Michigan State, So. The tough, physical back turned heads as a freshman, running 146 times for 699 yards and 11 touchdowns last season. Some are comparing Scott to Le?Veon Bell. And that?s saying something.

6. De?Veon Smith, Michigan, Sr. Nothing fancy about Smith, a blue-collar back who pounds between the tackles. But staying healthy is an issue. Smith ran for 753 yards in 2015 and will be asked to play a big role this fall.

7. Mike Weber, Ohio State, RFr. The Detroit product committed to Michigan out of high school and then flipped to Ohio State, where he redshirted last year. He?s an uber talent who looks like the heir to Ezekiel Elliott.

9. Markell Jones, Purdue, So. A tough, physical runner, Jones paced the Boilermakers in rushing as a true freshman with 875 yards and 10 TDs. He also caught 34 passes. How good can he be?

10. Ke?Shawn Vaughn, Illinois, So. He lived up to the hype after arriving from Tennessee with a fat scrapbook, rushing for 723 yards as a true freshman in 2015. What will he do for an encore?