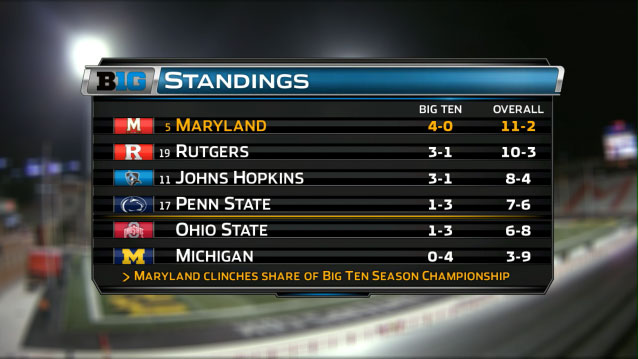 Another great weekend of Big Ten Lacrosse is now in the books. The race to Baltimore and a spot in the Big Ten Tournament saw three teams punch their tickets to the party that starts May 5. Maryland, Rutgers and Johns Hopkins have all clinched a spot in the battle for the conference championship, but the fourth and final spot is up for grabs.

There is plenty to play for as we enter the final week of regular season conference play. But let's recap the week that was.

The Terps took on Ohio State at Maryland Stadium. A year ago, the Buckeyes stunned Maryland in the Big Ten semifinals on the same field. Could Ohio State pull the upset once more?

For a bit it looked like that was possible as the visitors jumped out to a 5-3 lead early in the 2nd quarter. From there, however, it was all Maryland. Henry West (1 goal, 1 assist) converted a Matt Rambo (2 goals, 3 assists) pass at the 5:36 mark of the second stanza. This tally started a seven-goal run by the Terrapins that wouldn?t be stopped until the 3:26 mark of the third quarter. During the run, Maryland got two goals each from Bryan Cole and Colin Heacock. Rambo was especially impressive on this night as his play was crucial to getting Maryland on track when it was down by two. In the end Maryland won 10-8. The Terps may be the most balanced team in college lacrosse. They have all of the ingredients to make a serious run at a national championship.

The win guaranteed Maryland at least a share of the Big Ten regular season title. The best rivalry in college lacrosse is renewed this Saturday when the Terps take on Johns Hopkins at 2 p.m. ET Saturday in Baltimore.

In the end the Blue Jay offense was too much, leading Hopkins to a 19-13 victory. After falling behind 2-0, the Jays scored the next seven to grab control of the game. Wilkins Dismuke (4 goals) led the way in scoring and was aided by Ryan Brown (3 goals, 1 assist) and Holden Cattoni (3 goals, 1 assist). Despite missing four contributing midfielders, the Blue Jays continue to score at a very efficient rate. Dismuke has been one to follow and is one of the most improved players in the conference. Defensively, things didn?t go as well as they could have for Hopkins, and they will need to clean that up as they enter the postseason. It is always a dangerous proposition to try and just outscore opponents in the double digits.

Hopkins is currently in third place in the conference due to its head-to-head loss to Rutgers. Tradition, passion, and intensity will be on display this Saturday when the Blue Jays host Maryland at Homewood Field.

Piscataway was the site for the most entertaining game in the Big Ten this past weekend. With a potent offense and opportunistic defense, you can never count out Rutgers.

Case in point: The 15-14 Scarlet Knight win over Penn State this past Friday, in which Rutgers faced deficits of 4-0, 6-1, and 13-9 before going on a late run to win. Down by four late, Rutgers got stellar goaltending from Kris Alleyne (8 saves) in the fourth quarter. The senior made four crucial stops to keep his team close. On the offensive end, Jeff George (2 goals), Scott Bieda (3 goals, 3 assists) and Jules Henninburg (6 goals, 2 assists) went to work. Henninburg?s sixth tally, a spectacular one-handed-knock-down-collect-and-finish, was a thing of beauty.

Rutgers currently sits in second in the Big Ten, and a huge regular season finale at Ohio State looms Saturday night. The game can be seen at 7 p.m. ET on BTN (watch on BTN2Go). The Scarlet Knights finished their home slate a perfect 7-0.

Losers of two straight heartbreaking defeats, Penn State was looking to get back on track against Rutgers. A win would solidify its hold on a playoff spot in the Big Ten Tournament.

The Nittany Lions came out strong, surging to a 4-0 lead in the first quarter and a 6-1 advantage at the end of one. Much like against Maryland, however, Penn State couldn?t hold the lead and fell 15-14. Turnovers continue to plague this team. Despite the loss there is a lot to like about this group. Nick Aponte (4 goals, 1 assists) has emerged as the best offensive player in the Big Ten. Week in and week out, he raises his level of play. Freshman Grant Ament (2 goals, 3 assists) struggles at times with turnovers but is one of the better newcomers in the league. Ament and Adam Charalambides will most likely vie for Big Ten Freshman of the Year.

A must-win game is on the horizon as the Nittany Lions host Michigan. The equation is a simple one: Win and get in to the Big Ten Tournament. The clash can be seen at noon ET on BTN (Watch on BTN2Go)

The Buckeyes felt good going into their showdown with Maryland, and for good reason. The teams play a very similar style and Ohio State had some good success against the Terps in 2015.

Early on it looked as if the Bucks would grab their second conference win. Up 5-3, Ohio State was getting solid goalie play from Tom Carey (8 saves) and controlling the faceoffs thanks to Jake Withers. They could not, however, stop the Terps once they got rolling and fell 10-8 on Sunday night. Strong efforts were turned in by Carter Brown (3 goals) and Jarrett Hassfeld (2 goals). Since moving from attack to midfield Brown has now tallied 11 points (7 goals, 4 assists). The senior is doing all he can to help his team.

Despite the setback, Ohio State still has a shot to make the Big Ten Tournament. A win over Rutgers and some help from Michigan is what they need. Watch the battle at 7 p.m. ET Saturday on BTN (watch on BTN2Go).

Michigan hosted Johns Hopkins for the first time ever, and did so with Kyle Jackson back in the lineup. Jackson had missed the four previous games with an injury.

On Senior Day the Wolverines got out fast, going up 2-0 early. From there, however, it was all Hopkins. The Blue Jays went on a seven-goal spurt and never looked back, winning 19-13. Jackson (5 goals) was spectacular in his return, scoring several eye-popping goals. LSM Chase Brown was awesome too, collecting five ground balls and causing four turnovers. No. 49 in Maize and Blue was fun to watch.

Michigan can play spoiler this Saturday against Penn State. Catch the action at noon ET Saturday on BTN (watch on BTN2Go).