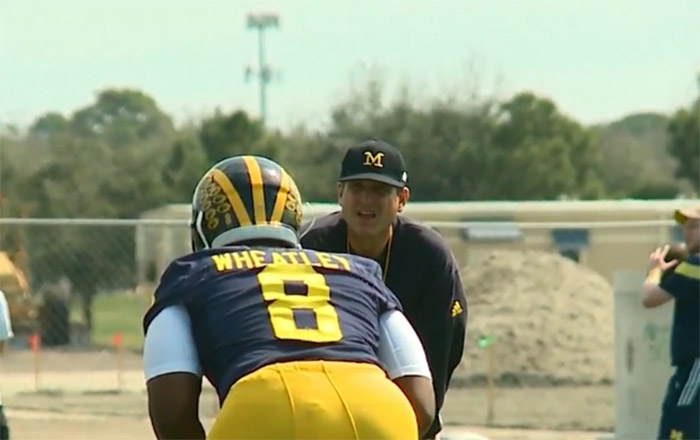 (AP) Jim Harbaugh basked in the sun Monday, spending six hours on the practice field with his Michigan Wolverines.

"It just flew by," the coach said.

Then the players hit the beach.

Back home in Ann Arbor, Michigan, it was cloudy and gray, temperatures were in the 40s and the locals were preparing for snow.

Michigan held the first of four scheduled practices Monday at the IMG Academy under a blue sky with feathery clouds that provided pleasant cover from the sun. The players worked out for four hours in 70-degree temperatures, with about half the team going from 8 a.m. to noon and the rest working from 10 a.m. to 2 p.m.

The Wolverines' trip is the latest way Harbaugh is drawing attention for Michigan while tweaking some opponents. Last year it was an extensive tour of the south, holding satellite camps for prospects on the campuses of high schools and colleges. This year Harbaugh turned signing day into an extravaganza, starring Tom Brady and Derek Jeter.

"It can certainly be asserted that it's inconsistent with some of the conversations about time demands," Big 12 Commissioner Bob Bowlsby, who is also the chairman of the new football oversight committee, said recently about Michigan's week in Florida. "Right now there's no rule that prohibits that. My guess is there will be a lot of conversation about it in the coming months."

Is Harbaugh concerned about the backlash? "No … You got your headline now?"

The coach also does not get all the fuss about the Wolverines being snowbirds while school is on break.

"I don't know why," he said. "Our tennis team will be hitting balls here next week."

IMG Academy is a boarding school that trains elite athletes from all over the country, including football players. The IMG football team has 20 players who last week were offered scholarships by Tennessee.

Michigan cannot recruit while on campus. The Wolverines are using IMG's field house as its headquarters this week. The building is usually used by IMG's football, baseball and lacrosse teams, but they cleared out to make room for Michigan- and to ensure no inadvertent impressible contact is made.

"I don't know that there is one," Harbaugh said when asked about the possible recruiting advantages of the trip.

Harbaugh has said practicing during spring break gives his players extra time to focus on academics. They won't be practicing during midterms now. He also looks at it as an opportunity for the players to bond.

"You ever seen the movie "Remember the Titans?" Check that out," Harbaugh said. "Take a look at that. We're going to watch it tonight as team. Team building, Team development. Getting to know each other better."

The rebuilding of Michigan under Harbaugh seems to be way ahead of schedule. The Wolverines won 10 games last season, their first under the former Michigan quarterback. A few weeks ago, Harbaugh signed one of the top recruiting classes in the nation, including top prospect Rashan Gary, a defensive lineman from New Jersey.

This spring Michigan needs to work on finding a new starting quarterback and replacing several key players from one of the best defenses in the country. Harbaugh is also breaking in a new defensive coordinator, Don Brown, whom he hired away from Boston College.

This week in Florida, though, won't be all work for the Wolverines.

At least one more trip to the beach is planned. There will be bowling outings, mini-golf and Ping-Pong tournaments. On Wednesday, there is no practice and the team is scheduled to attend the Tigers-Pirates spring training game. Harbaugh is set to coach first base for an inning for the Tigers. Maybe for the Pirates, too. Pittsburgh manager Clint Hurdle is a Michigan native.

Friday's practice will be held in IMG's 5,000-seat football stadium and open to the public.

After practice on Monday, Harbaugh chatted with ESPN basketball analyst Dick Vitale, who lives in the Tampa area. Dickie V gave Harbaugh a few pointers on his jump shot. "Tuck your elbow in and elevate," Vitale said.

Harbaugh stressed that all the team activities planned for the players were voluntary.

"We want to be the team that has spring break in a first class manner as well," Harbaugh said. "That's a goal for us. We're going to have a sober, healthy, productive spring break."