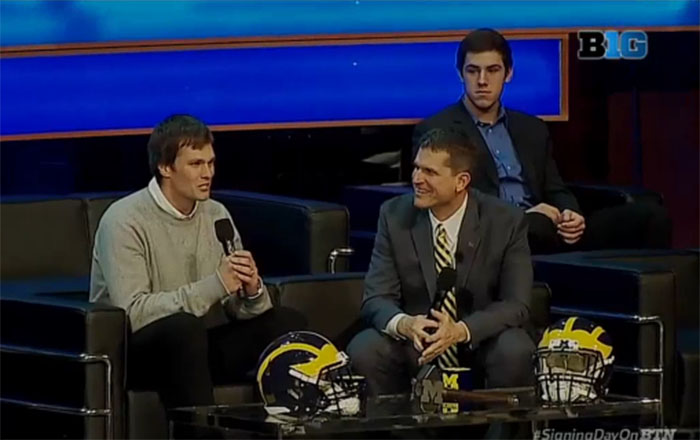 The dust has settled on Signing Day.

Here are my eight observations from the big day!

Jim Harbaugh makes news just getting out of bed-or it seems that way. There has been tree climbing, Tweeting at rappers, sleepovers, satellite camps. Now, this: The ?Signing of the Stars? spectacular which was a pep rally on steroids trumpting the arrival of the 2016 class. There was Derek Jeter, Tom Brady and John Harbaugh pumping up the event that has set a new standard in over-the-top hype in a recruiting system that already is overloaded on hype. How will Harbaugh top this next season? I can?t wait to find out.

While Michigan played to the cameras on signing day, Ohio State quietly went about its business of assembling yet another boffo collection of players. In fact, it was the best in the Big Ten ? again. That?s six years in a row that the Buckeyes have inked the top collection of recruits in the Big Ten, according to recruiting services. Urban Meyer?s glistening resume (three national titles) and record since arriving in Columbus (50-4 overall; 31-1 Big Ten) are all the fanfare he needs to grab headlines and the attention of blue-chippers from coast to coast.

Nebraska is still the one to watch in the West. Yes, the Cornhuskers finished behind Big Ten East heavies Ohio State, Michigan, Michigan State and Penn State in recruiting rankings. But no team in the West Division finished ahead of Nebraska. Nebraska did a nice job adhering to its philosophy of recruiting in a 500-mile radius of Lincoln. The Huskers signed the No. 1 Rivals.com player in Iowa (John Raridon) and South Dakota (Matt Farniok), Mr. Football in Minnesota (JD Spielman), the St. Louis Post Dispatch Player of the year (Tre Bryant) and the Colorado player of the year (JoJo Domann).

Penn State needed to beef up its offensive line. And, it did just that. In fact, some feel this is the school?s best collection of linemen it has signed in years. There is four-star tackles Michal Menet and Will Fries, four-star center Connor McGovern, and three-star tackle Alex Gellerstedt. McGovern is on campus now. Menet is the ultra-stud of the bunch and has a good shot to start in the fall.

Michigan State has earned a rep for being the ultimate developmental program, turning three-star recruits into four- and five-star talent once it arrives in East Lansing. Well, the Spartans landed their best class since Mark Dantonio arrived in 2007. This mega haul is highlighted by the best collection of receivers in the Big Ten that includes Donnie Corley, Cameron Chambers, Justin Layne and Trishton Jackson. All are four-star recruits. What will these guys look like in two, three years?

The Big Ten gained some cred with Michigan landing the nation?s No. 1 player: DT Rashan Gary. Ohio State also grabbed a top-10 talent in DE Nick Bosa. And The Buckeyes and Wolverines are ranked in the top-10 by various recruiting services. This class helped the Big Ten close the gap–to a degree–on the SEC. The Big Ten had five teams in 247Sports? Top 25. The SEC had nine, led by champion Alabama.

"Backstage, they told me that we got some really good news." – @CoachJim4UM, in reference to top recruit Rashan Gary https://t.co/7HTDNhAeAx

The biggest surprise? Maryland. New coach D.J. Durkin did a nice job assembling a class rated No. 42 by 247Sports, even though he had a limited amount of time. The fact that Durkin signed just 21 players kept the class grade down. Maryland inked three four-stars and 14 three-stars. Makes you wonder what Durkin will do once he gets a full recruiting cycle under his belt.

Iowa is just No. 46 by 247Sports. But, don?t fret. Some felt the Hawkeyes should have been higher coming off a season for the ages that saw the program go to the Rose Bowl for the first time in 25 years. But most of this class already was assembled before the 2015 season of glory unfolded. Look for Iowa to get a boost in the 2017 class based on what it did last season. The echo effect.