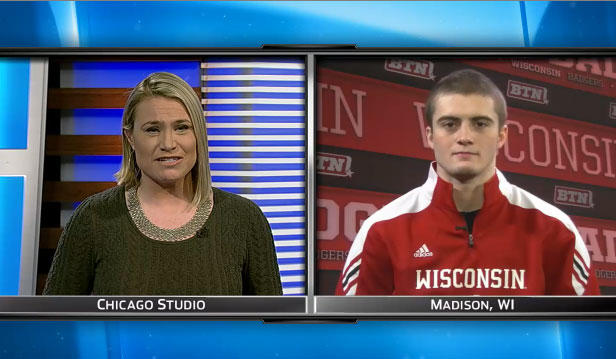 In my five years covering Big Ten wrestling, I have come to better appreciate how truly difficult it is to win matches in this conference. Every single time you toe that line you better be prepared and ready to battle. So many factors play a role as to who gets their arm raised.

It goes far beyond just singles and doubles. How was your week of practice? Were your academics in order? Did you get the proper sleep? Was your diet/weight management the best it could be?

And perhaps most importantly, how is your personal life? Having your personal relationships in order is a huge factor in how your preparation and focus are determined. Have you been able to deal with other distractions? This is why it's so important to control what you can control. You're wrestling the best guys in the country week in and week out. Forget about winning a national championship, becoming an All-American or Big Ten champion. Just winning a single match is quite the journey within itself.

I really can't comprehend how the great ones do it. The discipline, sacrifice and dedication are at a level very few understand. Everybody ?wants it,? but not all are willing to do what it takes to get it.

Let's put sprinkles on somebody's ice cream. Indiana's Nate Jackson of Indiana hung on for a 7-6 decision over top-ranked Bo Nickal of Penn State last weekend. Jackson is one of the leaders on the Hoosiers and has shown at times during his career that he is capable of big things. Jackson moved up to No. 6 in the rankings while handing Nickal his first loss of the season. Tthe style of the 174 pound weight class has changed this season compared to what is has been the past few seasons. Guys like Nickal, Jackson and Alex Meyer of Iowa rely more on their athleticism and it creates more of an exciting brand of wrestling.

Jackson and Indiana host Maryland Friday as the Hoosiers will look for their second Big Ten dual victory of the season. It's available live with BTN Plus on BTN2Go.

Following dominating wins at Purdue and Indiana, No.1 Penn State returns home to meet No. 9 Nebraska. Let me just add this quickly. Rec Hall is one of the top atmospheres in college wrestling. If you ever have the opportunity, do yourself a favor and get there for a match. Nine weight classes pit ranked guys against each other. The 141 pound class will be a big match between No. 13 Jimmy Gulibon and No. 20 Anthony Abidin. Both these guys have not had the best starts so a win here would be big for them both individually and for their teams. At 149 pounds we should see No. 1 Zain Retherford against No. 5 Jake Sueflohn of the Huskers. Both guys are tough on top and gives us another fun matchup at the most loaded weight class in the conference. Congrats to Sueflohn for picking up his 100th career victory last week against Jake Short of Minnesota.

I see the Nittany Lions having too much horse power, but as I said to start this article, if Penn State is not ready Nebraska could be dangerous. The Huskers will wrestle the seventh ranked Buckeyes in Columbus on Sunday in another matchup that pairs a handful of ranked guys. Nebraska is going to get a really good idea where they stand in the next couple days.

No. 14 Illinois travels to Ann Arbor to face the sixth ranked Wolverines Friday night (also available on BTN Plus on BTN2Go). Michigan shot up from No. 12 in the rankings following their 21-11 win at Ohio State. Michigan was able to win those toss-up matches at 133 (Bruno), 149 (Pantaleo) and 174 (Mahomes). No. 15 Rossi Bruno will have another big match when he locks horns with No. 2 Zane Richards of the Illini. Richards had a big win last weekend against Iowa's Cory Clark.

Illinois top-ranked Isaiah Martinez continues to rip things up at 157. In 17 matches, the sophomore has 12 tech-falls and has stretched his winning streak to 59. Martinez faces No.5 Brian Murphy. No. 5 Zac Brunson has been out for a few weeks, but if he returns it sets up a nice match with No. 16 Davonte Mahomes of Michigan.

Iowa recorded its largest margin of victory last Sunday with a 54-0 win at Northwestern. The Hawkeyes scored bonus points in nine of ten matches. The featured match at 149 between Brandon Sorensen and the Wildcats Jason Tsirtsis did not conclude as Tsirtsis injury defaulted in the second period. Iowa travels to Madison to face Wisconsin on Friday in a dual featured on BTN (8pm est.). Looking forward to another battle between No. 3 Cory Clark and No. 7 Ryan Taylor of the Badgers at 133. Heading into this weekends action Iowa, Penn State and Michigan remain undefeated in Big Ten duals.