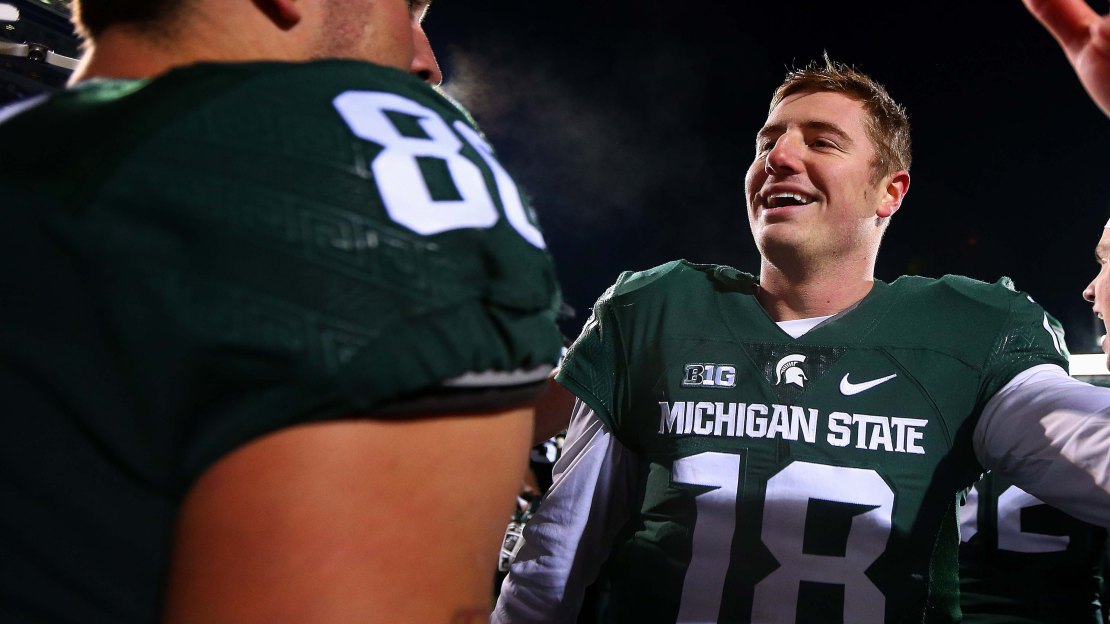 The Michigan State machine rolls on. The 2015 season marked the fifth time in the last six years that the Spartans won double-digit games to go along with three Big Ten championships. And the program has played in major bowls each of the last three seasons, reaching the playoffs for the first time last season.

Mark Dantonio has a strong foundation laid. Players come and go, but the Spartans always play well. That?s a credit to a strong coaching staff that has been marked by stability. Still, replicating the success of last year?s 12-2 team will be difficult to do. But don?t doubt Dantonio, who enters his 10th season in East Lansing.

Many key players return in 2016. The defense welcomes back S Demetrious Cox, LBs Jon Reschke and Riley Bullough and T Malik McDowell, among others. The offense has back G Brian Allen, TE Josiah Price, WR RJ Shelton and RB LJ Scott, to name a few.

Here are the top five Spartans to replace from 2015:

C Jack Allen. The rugged Allen helped the Spartans average 385.5 ypg (sixth in the Big Ten) and 151.3 yards rushing (eighth). He leaves campus as one of the school?s all-time greatest linemen, earning All-American honors each of the last two years. Tough, tenacious and versatile, Allen could play any position on the line and played in 47 career games, including 46 starts (41 at center, five at left guard), allowing just three career sacks.

DE Shilique Calhoun. He concluded a stellar career with second-team All-American honors in addition to consensus first-team All-Big Ten accolades. Calhoun was one of only eight Spartans in program history and the first defensive lineman to earn first-team All-Big Ten honors three times (2013-15). He had 127 career tackles, including 43.5 for losses (267 yards) with 27 sacks (211 yards).

OT Jack Conklin. He enjoyed an amazing career that saw him arrive in East Lansing as a walk-on and leave a year early for the NFL after garnering All-American honors. Conklin allowed only four sacks in 38 career games and recorded more than 235 career knockdowns.

QB Connor Cook. Arguably the greatest quarterback in school history, Cook leaves with most every significant passing record-and lots of big wins; the most ever for a Spartan signal-caller (34). The 2015 Big Ten QB of the Year and Unitas Award winner, Cook won two Big Ten titles and guided the program to its first playoff appearance to go along with 71 career TD passes and 9,217 yards passing.