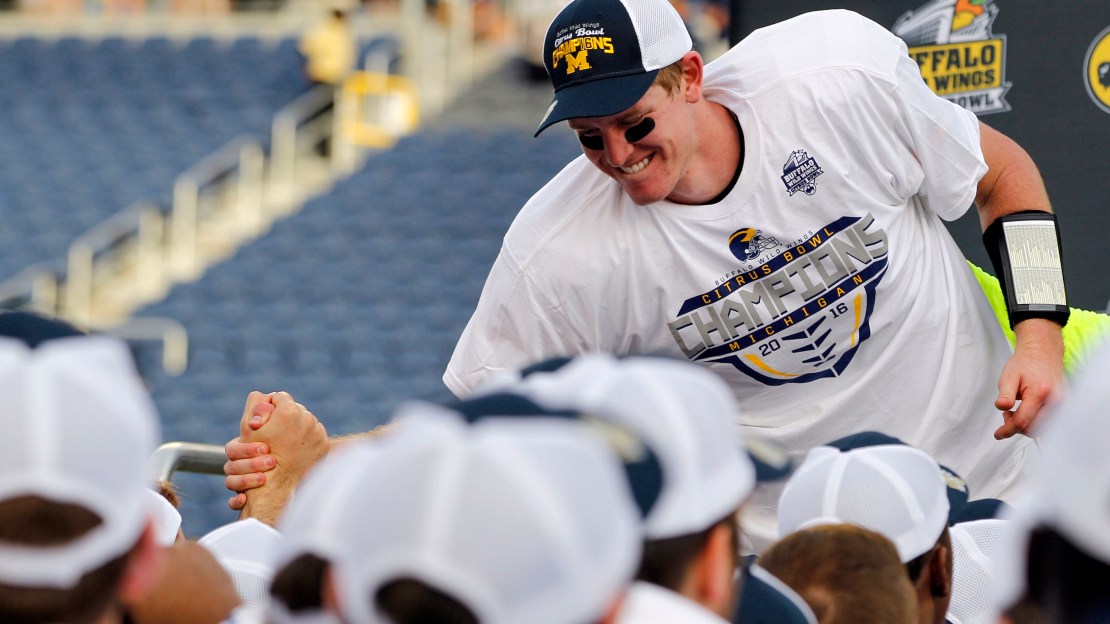 By most accounts, Jim Harbaugh?s debut at Michigan was a rousing success. He inherited a 5-7 team and turned it into a 10-3 squad with a domination of Florida in the Citrus Bowl to end the season. The losses all were ?quality,? as the Wolverines fell at Utah, vs. Michigan State and vs. Ohio State.

No doubt, this is a program with as much promise as any in the Big Ten, as Harbaugh continues to fold in talent that he has recruited. Most of last year?s key contributors are back, but the offense needs more playmaking ability as it searches for a quarterback. The top running backs return but are largely pedestrian, and a veteran line with four starters is back but needs to improve. The best part of the attack is an experienced corps of pass catchers.

The defense carried a big load in 2015 but must rebuild at linebacker. Another twist: coordinator D.J. Durkin left to coach Maryland, with former Boston College DC Don Brown taking over.

Michigan got a big lift when Jake Butt opted to return for his senior season after earning Big Ten Tight End of the Year honors. The Wolverines also will have WRs Jehu Chesson and Amara Darboh, OT Mason Cole and RB De?Veon Smith, among others, back on offense. The defense will be anchored by the likes of end Willie Henry, tackles Maurice Hurst and Chris Wormley, cornerbacks Jourdan Lewis and Delano Hill and safety Jabrill Peppers.

Michigan lost the likes of FB Joe Kerridge and LBs Royce Jenkins-Stone and James Ross. But here are the top five players to replace.

LB Joe Bolden. He was a consensus honorable mention All-Big Ten choice for what was the No. 2 overall defense in the Big Ten (284.8 ypg). Bolden led the squad with 76 tackles.

C Graham Glasgow. Yes, the rushing game struggled to get traction at times, but it wasn?t because of the rugged Glasgow. He helped the Wolverine attack rank No. 4 in the Big Ten (388.1 ypg). Glasgow earned honorable mention All-Big Ten.

LB Desmond Morgan. He was a consensus honorable mention All-Big Ten choice for a defense that was No. 5 in the Big Ten vs. the run (125.9 ypg) and yielded just 13 rushing TDs in 13 games. Morgan was second on the club with 67 tackles and made at least four tackles in 41 of his last 45 games.

QB Jake Rudock. He was a revelation after transferring from Iowa to play his final season. A steady hand, Rudock ranked fifth in the Big Ten in passing (228.3 ypg) and was No. 4 in efficiency, hitting 64 percent of his passes with 17 TDs and nine interceptions. It?s scary to think what Michigan?s offense would have looked like had Rudock not arrived.

SS Jarrod Wilson. He was honorable mention All-Big Ten by the coaches and leaves as a 30-game starter. Wilson was No. 3 on the team in tackles with 61 and had two interceptions along with a team-high 20 passes broken up.