Shelley Till: The Kelsey Mitchell Book of Excellence 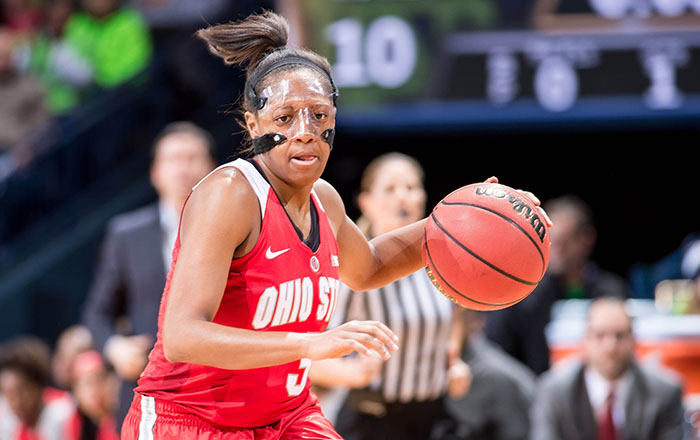 Ohio State sophomore sensation Kelsey Mitchell has just earned her second national and Big Ten Player of the Week awards of the season. It's an acknowledgement she didn't even realize she'd received when I spoke with her. If I had to summarize Kelsey in one word, it would be humble. She is a person who cares greatly about her family and friends, is willing to sacrifice for the betterment of her team, and has one pretty incredible role model to emulate.

Mitchell partially credits the early success of her team to its strong non-conference schedule, one in which she learned a lot about herself. Losses to South Carolina, UConn and Notre Dame have revealed plenty of areas that need work. For Mitchell, she took the losses personally, especially to UConn.

"I learned that I need to be able to play when things aren't going my way," she said. "I was sat down, taken out of my rhythm, and had a monkey wrench thrown into my style of play."

A loss like that can certainly knock you to your knees, but Mitchell, proving to be wise beyond her years, learned from it quickly and moved on. She attributes that loss to the greatest lesson she's learned yet: playing through adversity.

Mitchell will be the first to say she has struggled with self-confidence. She was strapped with wearing a face mask through the early part of the season. She admits that she didn't handle it well. She was "making a lot of excuses, and doubting" herself. It took conversations with her mother and grandmother to help her realize she was being too hard on herself. Her "go-to person," Grandma Marva, would say things like, 'Don't let this stuff bother you, because it's just basketball. Don't let it dictate who you are and who you want to be. Just be yourself.' Pretty incredible lady, if you ask me.

Kelsey also turned to the comments of her favorite pro player growing up, Kobe Bryant. Hearing Kobe express his intentions, during his final season, to take every moment, every game, and embrace it really struck a chord with Mitchell. Although she's not even close to the end of her career, she said that message has helped her appreciate her opportunities to become a better player and person.

Speaking of professional basketball, Mitchell let out a chuckle when asked about her aspirations to play at the next level. As if there is any doubt! In her mind, she's not even thinking that far ahead, and "if" the day comes that she's afforded the chance to play in the WNBA, she will embrace the opportunity. For now, she's just taking it one day at a time, trying to improve personally and make her team stronger in any way possible.

Another area she hopes to improve upon is her leadership. In fact, she doesn't see herself as the leader of this team? yet. More work to be done in the Kelsey Mitchell Book of Excellence. Who does she want to emulate as a leader? You guessed it, Grandma Marva!

"She's that one person who keeps everyone together," she said. "That signifies leadership to me."

Kelsey doesn't take her position lightly. She understands the weight on her shoulders and embraces the opportunity with gratitude and humility. In the modern era of sports, it is refreshing to see an athlete who is so gifted and so humble at the same time. When asked where she gets it, Kelsey replied, "I'm from Cincinnati where a lot of people want to be where I am. I'm doing something not many others get to do. Whether they know it or not, I'm doing this for those people who don't get a chance to go to college and play sports at a big time level."

Grandma Marva, you've done fabulous work in your granddaughter. Your legacy of leadership is certain to live on through her.

.@OhioState_WBB Kelsey Mitchell is the #B1GWBBall Player of Week after guiding the Buckeyes to a pair of #B1G wins pic.twitter.com/V0zaHZOPPE